Last week's article about Wiener schnitzel attracted a bigger postbag than usual. Breaking free of the authoritative Austrian shackles - it must be veal and it must be made in Austria - two things became clear. It's a great favourite of many of you, and the majority would use pork or chicken over veal. The basic principles of cooking these are exactly the same.

With such a basic idea as meat fried in breadcrumbs, it's no great surprise that over the years many embellishments have been tried to greater or lesser effect. I'm grateful to reader and friend PM who reminded me of-

You garnish your cutlet with the topping of a fried egg, some criss crossed anchovy fillets and a scattering of capers. This was created in the 19th century, in Borschardt, a Berlin restaurant, and named after one Friedrich von Holstein who must have been a regular patron. A recipe which I found described it as a brilliant study in contrasting textures and flavours.

It doesn't appeal. Having said that, a schnitzel will need a bit of added salt. I recently ate a chicken schnitzel in a branch of Angela Hartnett's Cafe Murano (review coming soon). She resolved that issue by topping it with very finely grated Parmesan, a rather less in your face solution.

Now to the blue riband-

In essence this is veal with ham and cheese, but there are a couple of ways you can do it. Probably the most common method is to beat your veal super thin, so it can be folded over to cover a slice of ham which has been wrapped round a thin slice of cheese, typically Cheddar or Gruyere. Hold the veal in place with a toothpick while you breadcrumb and cook it.

Although this sounds quintessentially French, it doesn't find its way into Mastering the Art of French Cooking. In that august volume, veal stuffed with ham and cheese is served as a rolled roast.

In Italy, on the other hand, it is very common, and I have yet to find any restaurant in Bologna on whose menu it doesn't feature. The definitive Il Cucchiao d'Argento (The Silver Spoon) has a rather grander version.

Cook a plain breadcrumbed veal escalope. When it's done, put a slice of prosciutto crudo, some shavings of grana padano and 2 or 3 slices of truffle on each slice. Add some meat stock to the pan, cover and cook till the prosciutto is transparent.

Anna Conte has a similar but simpler version.

As above, but just top the veal with some shaved Parmesan before finishing off in some stock.

I don't particularly see the point in getting something fried to crisp perfection, then getting it wet again, but you find this in a fair few Italian recipes. (See, for example, Mark Baird's Rovellini from a couple of years ago.) Finally, a dish which I enjoyed often in Germany, but which I've never seen elsewhere. 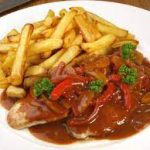 This is simply a veal or, more likely in Germany, pork cutlet, cooked in the usual way with a tangy sweet, sour Zigeuner sauce. Zigeuner is the German word for gypsy. For the last ten years or so the Roma community have taken exception to the name, and it is now deemed politically incorrect in some circles. You may simply see it described as Hungarian Pepper Sauce. When making this some cooks will season the coating flour with paprika. For the tang, this recipe uses vinegar, but some recipes will add chopped dill pickles and use some of the vinegar from the jar. Make the sauce in advance.

Cook the peppers, onions and garlic over a medium heat until soft. Add a little s & p at this stage. Add the tomato purée and stir well. Add the stock or beer, vinegar and paprika and cook gently for five minutes. Then add the tomatoes, tomato ketchup, sugar and chilli flakes. Check the seasoning,  Allow to bubble gently till most of the liquid has evaporated, then check the seasoning again. You may want a little more vinegar or chilli.