This week’s guest recipe comes from friend and fellow foodie, Mark Baird. Mark is known in Tom Eats! circles as the RCI, Retired Captain of Industry. Before his recent retirement he ran Diageo almost single handedly, despite one or two people who claimed to be further up the corporate ladder (Head of Alcohol in Society/Head of  Industry Affairs and Alcohol Policy, it says here – Ed). I’ve been trying for a while to persuade Mark to part with a recipe or two from his Italian background. He tells me that this one was a speciality of his mother’s. Its Sunday name is Rovellini/e Lucchese/i, from the province of Lucchese in Tuscany, whence she hailed.

The recipe calls for rump. Don’t be tempted to use better quality beef – it needs to stand up to a long slow cook. Mark tells me that this was the cucina povera version of the dish: richer folk had a version with veal and capers. I’ve tracked down a version of that too, but I’m sure Mark’s mum’s dish was the better. No one know knows what rovellini/e means; sugo is Italian for sauce (often tomato); and gremolata is the Italian for gremolata. 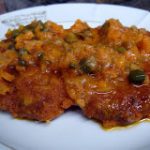 Rovellini in sugo with gremolata

2 rump steaks, beaten out to a thickness of about 1cm and cut into 5cm squares; seasoned flour; 1 egg, beaten; breadcrumbs.

Get your sugo started first. In a large, wide pan, big enough to hold the meat and sauce in a single layer, soften the onion in the olive oil for around 5 minutes. Add the carrot, celery and chilli. Fry for another 5 minutes, then add the garlic. Chuck in the tomatoes, and break them up a bit. Add 2 cans of water, making sure you get all of the juice out of the tins. Stir in the wine and sugar. Bring to the boil then simmer gently for at least an hour.

Next, breadcrumb the squares of beef in the usual way. Have three separate plates (with a rim), one for each of the flour, egg and breadcrumbs (in that order), and a plate for the finished squares. Flour each piece of meat, knocking off any excess, coat thoroughly with egg, then dip both sides in the breadcrumbs, ensuring a complete even coating. (TOP TIP – use one hand only, preferable your non dominant hand. That way, should you need to get some more flour or crumbs, or answer the phone, or put the TV on pause, you can do so without reducing your kitchen to a bombsite. That doesn’t come from Mark’s mum, but from the voice of bitter experience – me.) Cover and place in the fridge for at least an hour. Overnight will do no harm (and a long slow cook for a sugo is never a bad thing either). Take out at least half an hour before starting to cook it.

To make the gremolata, finely chop the parsley. Mark suggests using kitchen scissors in a mug or jug – exactly the same way I would do it. Mix together with the garlic and lemon zest and set aside to allow the flavours to marry. When zesting the lemon, take care to avoid the white pith, as this is quite bitter.

Brown the slices of crumbed meat in batches in olive oil over a medium heat. This will need about 1½ minutes per side. As always when browning, don’t overcrowd the pan. You will end up steaming instead of frying, and the meat won’t colour. Drain the beef on kitchen paper and allow to cool for about 30 minutes.

The final stage is to put the beef in the sauce and simmer with the lid on for one and a half to two hours. You can do this on the stove or in a low oven.  Keep an eye on the liquid levels and top up with a little water if needed. The meat should be tender and the sauce nicely thickened.

Plate the beef, spoon the sugo on top, and put a couple of teaspoons of gremolata on top of each slice. Some would also add a squeeze of lemon.

In Mark’s house this would be served with potatoes boiled in chicken stock and green beans dressed with garlic and good olive oil.

I found a version  from an Italian chef called Aurelio Battatini. His restaurant, Antica Locanda di Sesto, claims to be able to trace its roots to 1368. There is in fact precious little difference. His version uses veal instead of beef, and therefore needs less cooking. He uses fresh tomato. In Scotland, this is not to be recommended. A handful of capers is added to the sauce (anchovies are a possibility too) and, surprise, surprise, it is credited to Aurelio’s nonna (grandmother). Why, when Italians wax lyrical about their culinary roots, does it always seem that a generation has been skipped? Mark’s mum gets my vote.