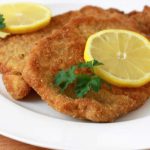 Today's ramblings were inspired by two things. A recent visit from the Vienna based members of the family brought back memories of my first (and thus far only) trip there earlier this year; and a brief snippet from a Radio 4 programme this morning.

Wiener schnitzel translates simply as cutlet from Vienna. What I didn't realise was that in Austria it has protected status. Make it in Austria and only with veal, or call it something else. I do laugh at the ridiculous indignation of those who rant about cultural appropriation, but I do find it quite rich for a nation to "protect" a dish which, historically, isn't theirs at all.

Austrian folk lore tells of one Joseph Radetsky, a soldier who apparently brought the recipe home from Italy, and proudly presented it to emperor Franz Joseph of Austria. Like much folk lore it's almost certainly fake news. In Milan, their famous cotoletta milanese can probably trace its roots back to the 12th century; however, the first reference to a dish of meat coated in breadcrumbs and fried seems to be over 2000 years old, going  back to the Roman Empire.

Milan upstaged by Rome? Italy 1 Austria 0? Who cares? It's a very fine dish. Simple, of course. Thin pieces of meat covered in breadcrumbs and fried. But a word of warning. As with many very simple plates, it's easy to get wrong.

Let's begin with your meat. To have the genuine WS badge, it must be veal. Surprisingly difficult to source in this country (why is that?) and not cheap. You can see why pork became popular. I also find this a very good way to cook a chicken breast, suitably flattened. The meat must be thin so it can cook quite quickly, at a high-ish heat. Not hot enough and the breadcrumbs will be greasy. Too hot and they will burn. Meat too thick, and it won't be cooked through by the time the crumb is golden.

Then there is the question of what you cook it in. I've always managed quite well with veg oil and a bit of butter added for flavour later. Some of the books say you should use lard since it doesn't cool down when you put the meat in. Or clarified butter. Well, I don't keep lard in the house, unless some beef has been roasted recently, and I can't be bothered clarifying butter. To be frank, I think you can use whatever you have, provided you're careful. Whatever it is, you need enough fat to come half way up your schnitzel.

The books will say that the fat should be around 160 - 170˚C. Well, woop de doop if you have a thermometer. Not too many of these in Franz Joseph's kitchens. But bread cubes a plenty. Take one. If it sizzles well when you chuck it in, you're good to go: if it spits at you, it's too hot: if it lies placidly in the pan your schnitzel will be a greasy mess.

I think I've given you all you need for the classic; however, I do know that many of you ignore the preamble, so let's get to the recipe.

Flatten the veal to the desired thickness, somewhere about 70mm. (Don't get too hung up about the exact size.) Put the meat between two sheets of clingfilm on a board, and flatten with a rolling pin or mallet – but not one of these studded meat tenderisers.

On three separate plates (plates are easier than bowls, as you’ll discover, though the one for the egg needs to have enough of a lip to prevent spillage) put, in this order, left to right, flour, egg and breadcrumbs. Have a clean plate or board for the breaded veal, large enough to hold all the pieces in one layer. Top Tip – use one hand only, preferably your non writing hand. Why? This is a messy process. If you are doing a few, you may need to shake the plates of flour and crumbs to level them up again. Until you get used to quantities you may have open a cupboard for more. If both your hands are covered with a claggy mixture, your kitchen will become a war zone. One at a time dust both sides of the veal in the flour, shaking off any excess. Then dip in the egg, then in the breadcrumbs. Make sure all parts are covered and that it is fairly evenly coated.

The secret of a good schnitzel is in the cooking, in particular the temperature of the oil. Too hot and it will  turn too dark before the meat is cooked: too cool, and the oil will soak into the crumb, giving a final result which is unpleasantly greasy. (I know I said that before, but it bears repeating.) Put a generous amount of oil in a frying pan (about 2 cm) and place over a medium to high heat. Test the temperature by dropping in a cube of bread. It should start to sizzle immediately; however, if the oil is spitting the pan is too hot. as above. Your veal will need about 2½ -3 minutes per side. Don’t fiddle with it in the pan and turn only once. A minute or so after turning, add a generous knob of butter. Once that is melted, baste your schnitzels. If the butter/oil mixture is turning too brown, a squeeze of lemon will stop the process. Drain well on kitchen paper. Serve immediately with a sprinkling of salt and a squeeze of lemon. Fried food is a rare treat. I like this with some crunchy sauté potatoes or chips and a green salad, perhaps with rocket and watercress, or baby spinach.