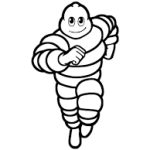 No one does, of course. These faceless men and women who selflessly eat out anonymously in the world's finest establishments, paying their bill at the end and leaving without comment. But what is Michelin all about?

The idea for this piece came about from a conversation over dinner. In a Michelin starred restaurant, as it happens. (Unalome, Glasgow, reviewed in this Friday's Tom Eats!) L (no, not that L, L of K & L fame - do keep up) and I got to chatting about the criteria which are applied for the starring system. Having in my mind all manner of inconsistencies within Scotland alone, I expressed the view that, other than feeling that there was a lack of transparency, I really hadn't a clue.

We got to conversing about Fife, which has more than its fair share of stars. Clearly, we said, service can't be a factor. We all had in mind an establishment, now closed, which boasted one despite the front of house person. She, how shall I put this, perhaps did not have hospitality running through her veins. Clearly, a little research was called for.

The first Michelin Guide was published in 1900. Amongst a lot of practical information for motorists, it recommended places to eat and stay in France. The scope then extended beyond France, and the star system began in 1926, a single star being the only award. Five years later the three star system as we know it now was instigated.

Michelin will dispute my criticism about transparency. They will point to what they publish. One star = very good cooking in its category; two stars = excellent cooking, worth a detour; and three stars = exceptional cuisine, worthy of a special journey. Is that helping you? No, me neither.

Perhaps of more use are the five main criteria which the company owns up to for inclusion in the judging system. These are - quality of the products; mastery of flavour and cooking techniques; the personality of the chef in his cuisine; value for money; and consistency between visits. While anyone who has visited a three star gaffe might be permitted a wry smile at the penultimate one, that does assist us a little.

In particular, it does explain how the place I referred to above succeeded. The inspectors are not interested in service quality. Nor, says the company, do they look at interior decor or table setting. Interesting. It does explain how a tiny sushi place in a cupboard in a Tokyo car park was included.

I also noted with some interest the consistency test. Fair and commendable. The Tom Eats! columns are, in the main, based on a single visit, a snapshot in time if you will. So how often does M. Michelin revisit? I assume it can't be the same individual each time. So what scoring system do they apply? And why can't they publish it? If you ever read this blog's eating out scribblings, my criteria are there for all to see, and even I have to concede that there is a great deal of subjectivity. It really can't be otherwise.

Having a star can bring its own stresses. One owner of a small place told me that after getting his he had a lot of demands to include many more expensive bottles on his wine list. How can you possibly have a Michelin star if that's your best bottle of wine? one lady apparently commented. Yes, your turnover will probably increase, but that's a lot of stock to have to hold, just in case. At the extreme end, French chef Bernard Loiseau committed suicide because of his imminent demotion from three to two stars. Closer to home, Don and Wendy Matheson at Boath House in Nairn wanted to hand back their star because of the pressure it put on the business in terms of diners' expectations. (The place has now changed hands.) Celebrity chef Nathan Outlaw deliberately restructured his menu from the two star standard so he could, in his own words, start to enjoy cooking once again.

Unlike critic Andy Hayler, who is probably the only person to have eaten in all Michelin's three star joints in the world, my own experience is very limited. (The editor of this blog is a real tightwad when it comes to expenses.) I've sampled most of Scotland's one star eating places, a few in England and further afield, and only two or three meals in two starred restaurants. It's enough to get me very confused. There was a pub in London with one star. I commented that even I would be capable of producing the food served, and I could no more qualify for any cooking award than I could fly in the air. Giles Coren once wrote about dining with a couple of one star chefs in a 2* gaffe, all desperately trying (and failing) to work out the differences between the respective establishments.

Restaurant Andrew Fairlie is the only two starred place in Scotland. I can see why. But travel round a little and your confusion will grow. Compare and contrast The Cellar in Anstruther (1 star) with Craig Millar@16 West End in nearby St Monans (no stars); or, in Edinburgh, The Kitchin (1 star) with the near perfect Aizle (no stars).

I don't need to understand everything in life but, as a food writer, I wish I knew a little more about this.

When I published this blog I had it in my mind that I hadn't eaten in a 3 starred establishment. Doh! How could I forget Heston Blumenthal's amazing Fat Duck.