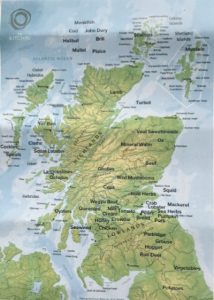 Even in the middle of a pandemic you struggle to get a table at Tom Kitchin's flagship restaurant. We had to book a couple of months in advance for a Wednesday night. For a weekend, think six months ahead. My sense of timing is usually dodgy, but for once it failed to kick in. Lockdown Mark 2 kicked in less than 48 hours after our dinner here.

I had lunched here once, many many years ago, and retained the memory of a wonderful meal in elegant surroundings. It's amazing what a good designer can do in a building which was once part of a whisky bond. The space has been cleverly deployed, and broken up into smaller dining areas. For all that, it's bigger than I remember, tastefully decked out in greys and subdued blues. By contrast, the kitchen glows brightly at the end. Behind the glass you see a lot of calm professionals going about their business quietly and efficiently.

There are an awful lot of people employed here, and that's just judging by those one can see. I was very sad to learn that sister establishment Castle Terrace has closed for good, and raised an eyebrow to learn that 100 jobs went as a result. It's quite a bit smaller than this. There is a sense of occasion and anticipation when you cross the threshold. Not even the COVID rigmarole could spoil that, and their protective regimes are exemplary.

At dinner, there are a few options. The a la carte offers 2 or 3 course options but, this being a Michelin starred joint, there's a whole lot more. I'm sure they told us the loaf they brought us  was a soda bread. It wasn't, but it was fabulous. It goes without saying that the butter was top notch. A couple of good sized filo tarts appeared, one based on Cullen Skink, and a celeriac one for the non cream eater. A little while later the official amuse bouche came, in the form of a deeply flavoured mushroom broth, rich with the flavours of autumn and good stock.

Then and only then did we get our teeth into what we had actually ordered. From Nature to Plate is the strapline. The website tells us that they use French techniques on Scottish produce. All true. You are presented with a little map of Scotland to see for yourself where your dinner originated. I had razor clams, and was delighted to see their Scottish name spoots appearing on the menu. They were presented in their shells, having been prepared with chorizo, herbs and in a nice retro touch, a rich cream sauce. It being autumn, everyone is doing a game terrine. How will they differentiate theirs? The slab which was delivered resembled a small checker board. The chunks of assorted game meats were the size of gaming dice. Instead of an unspecified meat taste, you could clearly identify each and every component.

Lamb grabbed my fancy, and I neglected to read the rest of the description. I might not have gone for the raw vegetable salad and lemon confit jus, but it was a remarkable and effective complement to a couple of chops from a new season rack from Lauder. The Scottish borders also gave up some roe deer. Roasted loin, braised haunch, roasted ceps and red wine jus. It's really no wonder that autumn is my favourite culinary season.

When a youngster says that he and his pals are going to pre, he generally means that they're going to get tanked up before going out. In a Michelin starred place, it's something else. You've ordered dessert? Yes, but first the pre-dessert. In my case a pretty amazing combo featuring yoghurt mousse and buckthorn; a bramble based concoction for the cream free one. Then an almond soufflé with a plum compote and plum stone ice cream. I struggled to snaffle even a tiny taste. Finally, a rum baba. It was a bit short on rum, but this was more than compensated for by the sharpness of lemon clotted cream and a blueberry yoghurt sauce. Wow.

They don't seem to allocate waiting staff to individual tables, so we were looked after - very well indeed - by a variety of people. This could result in a slightly disjointed experience, but not when they are all as charming and well trained as the team here. A special mention to Franco from Calabria, (just because we saw more of him than anyone else, and I never miss an opportunity to practise my Italian).

So, any quibbles? Well, regarding the food, virtually none. Tom Kitchin was awarded a Michelin star just six months after opening in 2006. He has stayed at the top of his game ever since. But I always feel that his food is never knowingly underpriced. On the a la carte there is a supplement, as you might expect, for lobster and turbot. But also for sweetbreads and hare? The Surprise Tasting Menu costs £100 (and there is a vegetarian option); however if you want the Prestige Tasting Menu, be prepared to fork out 150 quid for the privilege. (And bear in mind that VAT is currently down from 20% to 5%.) Lunch options seem to be 3 or 4 courses, £51 for the latter. (I don't know what would happen if you wish only 2.) And if you want one of those courses to be grouse you will be stung for an extra £20. I buy my grouse from the same place as Tom. Last time I paid £8.50. The wholesale cost will be significantly less.

But, as is said in many contexts, if you have to ask about the cost, you can't afford to eat here. Near perfection at a price.