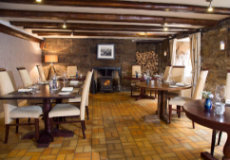 I DO like to be beside the seaside: if I am to be there, my home county of Fife offers some of the very finest locations: and, as you know, I am partial to a decent feed anywhere. Combining all of these elements in Anstruther (or Anster, as the locals know it), probably the most bustling of the East Neuk villages, what could possibly go wrong? The answer is, nothing.

We were overnight guests of the design superstar B (contributor of the ceviche recipe a few months back) and her husband C. Some people grow into the pseudonyms applied in this column. The Curmudgeon is a prime example. C, on the other hand, hates being the Grumpy Old Surgeon, so under no circumstances is this to be used. Clear?

There are only nine Michelin starred restaurants in Scotland. Two of these are in Fife. There has been a restaurant called The Cellar here for as long as I can remember. For some 30 years it was run by the celebrated Peter Jukes. I never got there in his time, but entering the characterful little space (formerly a smokehouse and cooperage) I remembered that I had visited in what seems like a previous life.

People who can remember that far back will also remember a highly successful advertising campaign with the strapline, one instinctively knows when something is right. And whatever generation you belong to, I defy you to disagree with my first impression when entering.

Having a Michelin star can be a disadvantage, as it obviously raises expectations. That really doesn’t seem to weigh at all heavily here. Yet the amount of skill and effort which went into the eight course tasting menu was phenomenal. The menu changes daily. I believe that the kitchen complement may just be chef-patron Billy Boyter and one other. His pedigree is impressive, having previously held a Michelin star when head chef at Number One in Edinburgh’s Balmoral Hotel. To move from having the support of a large brigade, to running your own place with minimal support, yet maintaining the standard of food is beyond impressive.

Once upon a time, according to earlier reviews, there was a small a la carte menu. As far as I can see from the website, only tasting menus are on offer now, 5 courses at lunch, 8 at night. In the modern style, only ingredients are listed on the menu, which requires a bit of heralding from the staff. Both the GOS (darn, I’ve said it again) and I struggled to hear the descriptions as they were announced. Never mind, I quite like surprises.

The website says that they cannot cater for those who are completely dairy free: however, cream free seemed to present no problems. This was not just a case of offering alternatives – a separate printed menu was produced. Proceedings kicked off with a wonderful slice of something advertised as venison, smoked yolk and linseed. Very much better than it sounds. No chef these days can resist the lure of an ingredient no one has heard off. Thus smoked mussels came with lemon and dabberlock. Some might know the latter as badderlocks or winged kelp. If, on the other hand, I had referred to it as Alaria Esculenta, you would have known it immediately.

There is quite a bit of smoking, and some foraging. Does he cheat a bit by referring both to wild garlic and to scapes, which are the stalks of the garlic plant? Probably not – they may be quite different, and I really don’t care. Any ingredient used is for one reason only, namely flavour. There were, praise the Lord, no smears, dots or stripes. Little cubes of ox tongue came in a sea of parmesan, rich and lovely. A simple heritage potato complemented some Arbroath smokie, the little hit of lovage adding an extra dimension. Mains, if I may describe them thus, included beef in the form of a sliver of steak and a glorious morsel of braised shin. For me, however, the star was a piece of soft halibut with mussel, wild garlic, and pork fat dashi - the weirdest, and most delightful “surf and turf” combination ever. Puddings involved hay cream and apple marigold, whatever that is, and koji barley and black banana and chocolate and finger lime. (I suspect the latter was not foraged in Fife.) All very good, but we cream eaters were all envious of the alternative, some truly wonderful combination involving strawberries in various forms.

Has chef got time for a quick hello, we asked? Nope. Already started on the prep for tomorrow. And quite right too. Producing food of this quality requires unstinting, unremitting effort. Mr Boyter, I hope to shake your hand one day. In the meantime I can but encourage everyone to take the pilgrim trail to Anster.