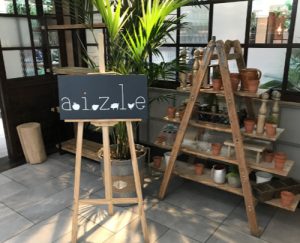 It was twenty years ago today! (No, not actually today. The anniversary to which I refer occurred on the day of this remarkable dinner. Please engage your imagination a little if you wish to be retained as a reader. But don't start playing bits of Sergeant Pepper - I've already done that.)

Twenty years wed, and seven years together before that. When L and I ask each other how we got old, that's how. Anniversaries come and go, but this one had to be marked with something special. On the day itself. Aizle (rhymes with hazel) has been around for a good few years. The reason for the failure to visit before was location, it then being tucked away in the wilds of St Leonards. In 2020 Stuart Ralston (recently on your screens being hard done by on the Great British Menu) relocated to Charlotte Square, vastly improving the atrium space of the Kimpton Hotel, that which Edinburghers will forever know as the Roxburghe.

Knowing how to show a girl a good time, I held open the door of the number 26 bus (tell a lie, it might have been a 31) as we arrived in style. Not romantic enough for you? Well, with a sweeping gesture I called for a couple of glasses of champagne. Not a good start to the evening - they don't do champagne by the glass or even by the half bottle! We were offered a crémant or something else Argentinian. Pah! Stuart, would you give a starving dog a rubber bone? Points immediately deducted - until I remembered that this column doesn't score on drinks.

After a glass of something white, they offered us a house welcome drink. It was described as kombucha (or was it koji - or both?) and sea buckthorn. Very refreshing whatever it was, even without a large slug of gin. 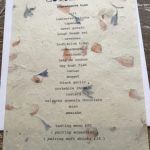 You can see my confusion

An elegant envelope appeared containing not so much a menu as a list of ingredients. (I forgot to tell you it's a tasting menu.) On closer inspection this turned out to be a very pretty thing adorned with pressed flowers. Philistine that I am, my initial impression was that it had been used before and dribbled on. Oops.

It's perhaps fair to say that I was slightly ambivalent about my first impressions. But then they started to bring food. By they I mean a variety of excellent staff. In the modern flexible way people don't seem to be allocated specific tables, which meant I didn't get all their names, apart from Esther. Esther and colleagues, you all did a fantastic job - apart from the wee man who delivered the dessert, but we'll come to that.

Laminated brioche, said the menu. Isn't that a croissant, I pondered? Sort of. Laminated dough had been wrapped round and round to form a sort of bun. The buns came with chicken liver parfait, tapenade, and whipped butter, and disappeared faster than they arrived. Seriously good.

A plate of wee amuse-bouchey sorts of things arrived. There was a celeriac taco the size of your thumb nail stuffed with fish roe. There was a tiny lattice work leaf of sweet potato with eel smoked on the premises. Somewhere was an ingredient described as cevennes. These I know only from Robert Louis Stevenson and his travels with his donkey. Research tells me that the region is famous for onions, but beyond that I can't help you.

All top restaurants these days seem to feature ingredients which I have to research later. I don't mind at all, provided the taste is worth it, Take chawanushi and norinade, for example. The former is a savoury egg custard. The word literally means steamed in a tea cup. Norinade? Think pesto made with seaweed, said our waiter helpfully. Ah, nori, of course. Anyway, with the addition of a few mussels they combined to superlative effect.

Tête de cochon. We can do that one. Pig's head. In this case a bit of cheek meat shredded and given a crispy coat. Then fish, more specifically day boat fish. I threatened them with Trading Standards if it transpired that it had arrived in hours of darkness.  Don't worry, sir, came the reply, definitely back in port by 11.59. It was halibut with foam, wild garlic, caviar and artichoke purée. Sheer perfection.

Hogget is very popular now. I wrote about it a week or two ago in some other scribbling. Here a piece of deliciously fatty saddle was topped with a postage stamp of cabbage or lettuce. A square of belly meat had the most intense of flavours, and, on a separate plate, skewered by what resembled Grandma's hatpin were two crispy fried sweetbreads. I couldn't remember if I liked sweetbreads or not.  I do now. A couple of gloops, of black garlic and wild garlic respectively, completed the scene.

On to the pre-dessert. Quite simply a masterclass in rhubarb. The purist might tell you that the dish cried out for crème anglaise, but the menu said we just got custard. The effect was similar to a crème brȗlée. I don't care for crème brȗlée, but this was glorious with a clear crunchy rhubarb thing on top. How was it made? Beyond my pay grade, guv.

I've already mentioned service. The main dessert was delivered by Stuart himself, and why not? If I were capable of producing food of this standard, I too would want to meet my adoring public and have my ears ring with the compliments which flew from every table. What was it, you ask? I can get technical when I need to. It was a round white thing with fluffy bits on top. A glance at the list established that the filling was made of valrhona guanaja chocoate. You think you buy valrhona chocolate in Waitrose? Not this good, you don't. Available online at £4.35 for a 70g bar. There was Amazake ice cream alongside, amazake being a sweet, low-alcohol Japanese drink made from fermented brown rice. There was miso somewhere and the dish, like the whole meal, was a word very similar to amazake. 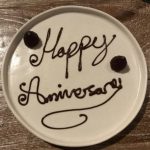 Well, it was our anniversary - did I mention that? - so they comped a couple of glorious fruit jellies, my all time favourite sweetie. And everyone gets a box of six little glazed thimble size bon bons with flavours such as peanut butter, ganache, blackcurrant jelly, and Ethiopian coffee bean, inspired, apparently, by Stuart's love of graffitti and his time in New York City.

We ate them later. I just remember them being pretty amazing. But most of all, I just remember going home and purring contentedly for a very long time. No need for superlatives. The score speaks for itself.