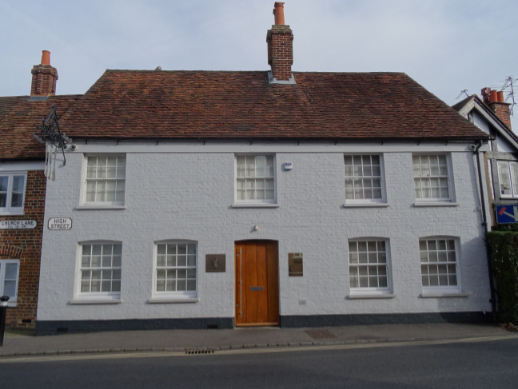 Obviously there are no restaurants to review at present. Tom Eats! will provide a varied programme which will include some Greatest Hits from the back catalogue. No hit was greater than lunch at Heston Blumenthal's Fat Duck in 2017

I was tempted to dispense with my customary scoring system for this review. A tally of 25 somehow seems pitifully inadequate. Equally, I can fully understand those of you out there who are shaking your heads in disbelief at full marks in the value for money category for a lunch which, including service but no alcohol, costs slightly north of 300 quid a head.  (2017 prices.)

I'll justify this by and by, but for that paltry outlay we enjoyed a journey, childhood reminiscences, performance art and magic. Oh, and also probably the finest meal I've ever eaten, the most charming service, and enough memories to keep us going well into our dotage. (Anyone coming to ours for dinner any time soon, you have been warned.) Tot up the price of all of these combined (bearing in mind you can pay £160 for a theatre ticket in London), and it's a snip. This column never mentions the wine. Just as well, but that's another story.

The experience begins a month or so before, when you are contacted by the storyteller. Why the surprise? Doesn't every restaurant have one? The idea is that you are going on a day trip to the coast. What are your childhood memories? What makes you feel like a kid in a sweet shop? This is followed up by a phone call. You will later be amazed by how much information they have got out of you. 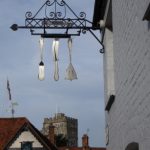 The understated entrance is hard to find, the main clue being the sign on the car park entrance across the road. There is a hanging sign with the logo featuring duck shaped cutlery, and a gleaming name plate which simply reads Les Grands Tables du Monde. The place looks shut, but at our approach a door suddenly opens and we are welcomed into a  dark little hall with food holograms circling mysteriously, a hint to the techno-magic to come.

The dining space seems surprisingly normal, if you discount the large doll’s house in the corner and a powerful magnifying glass on each table. You are handed your itinerary, seven stages of it, which will eventually comprise 15 courses. The notional journey covers a 36 hour period, the meal itself a mere four and a half. There is a day at the seaside: but all good holidays begin with the excitement of the night before. If you don't want to be too surprised by what is to come, you can use the magnifying glass to read the tiny print of the menu.

But first an aperitif. By now we are in the care of Dora, our charming Hungarian story teller. She offers me a concoction involving Campari, orange and prosecco. A mousse comes from a pressurised canister, and is then dipped into a vat of liquid nitrogen, whence comes a large bonbon, which you pop into your mouth in a oner. An extraordinary sensation to begin, with flavours popping out like fireworks. The food, when the plates start to flow, is equally breathtaking. I have no idea how many chef hours it must have taken to produce a honeycomb of beetroot with horseradish, but it disappeared in a bite. Breakfast on the day of the seaside trip itself produces more magic. A cup of "coffee" is hot on one side and cold on the other. The breakfast cereal from a variety pack is poured into some sort of savoury egg custard, resulting in a bowl of sausage, bacon, egg and tomato. Guard well the toy in your cereal pack – you make a box to store your magic penny which you’ll need later. 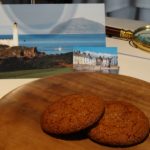 We move on to the seaside. Coincidentally, this was the source of most of the memories we had imparted a month earlier. Lesley as a child lived in Ardrossan on the west coast of Scotland: I enjoyed Famous Five style beach holidays at Elie in Fife. Sound of the Sea is a Heston signature dish, served on a glass topped box with sand below, eaten while listening to seaside noises, waves, gulls etc, on a mini iPod. It comprises some sushi and sea vegetables, with a seawater-like foam. Stunning in own right, evocative beyond belief in this setting. The fact that at that moment they delivered to us postcards of Ailsa Craig opposite Ardrossan, and Elie beach was enough to get us both emotional. At home an after swim snack for Lesley was usually a ginger biscuit. She was 25 before she realised that ginger nuts didn't contain sand. Neither did those on the plate which Dora brought us, but they did have golden sparkles to make it appear that they did. Still at the seaside we go rock pooling. The white chocolate crab which we find dissolves in a shellfish bisque to reveal layers of caviar. And at the end of your day at the beach, you need an ice lolly, one about 8 cm long including the stick. You may remember Zoom lollies from your childhood. This one was the flavours of Waldorf salad. 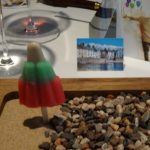 Space doesn't permit detail of every plate. It's hard to describe the walk in the woods. It had beetroot and mushroom and truffle and other good things, but it looked as though you were getting some tree bark with a few weeds and a couple of weevils for good measure. Extraordinary, both in concept and in flavour. Soon it was my turn for a wee wobble, with an extra pasta course based on a childhood favourite. 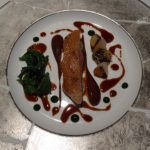 Somewhere in this, it was, astonishingly, time for something which resembled a normal dinner. I remember a plate of duck which tasted every bit as good as it looked. Puddings came in various stages. For the cream eater, Heston's reworking of Black Forest Gateau; for L his homage to sweet grapes and sweet wine. I saw this featured on TV once. Each plate takes at least one chef hour to create. 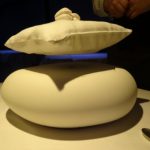 The first part of our last pudding arrived on a levitating pillow. Yes, drink had been taken, but I have the photo (right) to prove it. And finally the party bag. The doll’s house is wheeled to the table and opened up to reveal banks of little drawers. You take your magic penny and put it in the slot.  The drawers fly open and shut until one is selected for you. The device is so magical it knows that Lesley can't eat sweets with cream.

Is this the end? Almost. It is a belated birthday celebration for me, a present from my wife. Turns out Dora has read my blog and knows about previous kitchen experiences. We end with a tour of the kitchens where I'm presented with a personalised cooking spoon, plus a bookmark embossed with my name and the date.

Writing this four days on I'm still stunned. Thank you, Lesley; thank you, Heston; but most of all, thank you, Dora, storyteller extraordinaire.

Tom Eats! will return at the end of April.