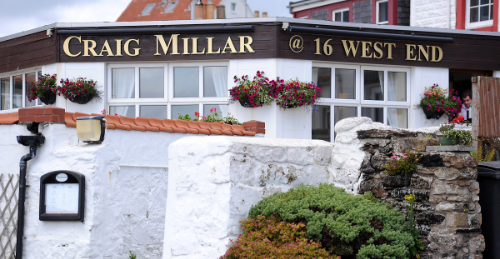 I often refer to Elie, where we were then lodging, and where the first draft of this blog saw the light of day, as the land which time forgot. Since my first holiday here, the better part of 60 years ago, changes have been minutely incremental, not to say glacial. As with all towns, the old hotels disappeared, converted into flats. Every year an older house disappears to be replaced by something ultra modern and ultra expensive, especially in areas with a sea view, or facing the golf course. But the major visible change this year is to be found on the street signs. Even in the third decade of the 21st century they are painted. This year the traditional duck egg blue has been replaced by a more prosaic off white. Council cuts, I suppose, a sign of the times.

Among the slow changes, one is particularly unfortunate. For a number of years, astonishingly, this sleepy little village boasted a Michelin starred restaurant. Sadly, Bruce Sangster has hung up his apron. Eating out now is restricted to a couple of pubs which have their moments (though see last week's Tom Eats!), but what is the holiday maker to do if he seeks fare of a higher quality? 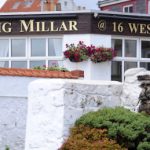 Simple. Head just a little way east along the pretty Fife coast, and arrive in St Monans. What do we know of the eponymous Monan? Virtually nothing is the answer, but his saint's day is 1 March. To celebrate that, or to celebrate anything else you fancy, head to 16 West End, domain of the redoubtable Craig Millar, subject of this week's Chef Watch. L, D, J and I were celebrating a four day summer holiday, and the fact that it was Wednesday. As celebrations go, it would have been hard to pick a better venue.

I first encountered Craig when he was chef at The Seafood Restaurant, the glass cube which clings to the sea in St Andrews. When he moved to St Monans, the cube was never quite as good. After a few years the partnership with Tim Butler ended and 16 West End was founded. I had my first meal here when it was shut. L and I were doing a bit of the Fife Coastal Path. It's a terrific walk, but you can get distracted by good places to eat. It was a baking hot day and a spot of lunch seemed a good idea. Oddly, no sign of fellow diners. Sorry, we're closed, said Craig - but I could do you a plate of smoked salmon. Unlike many in his profession, the man understands hospitality. I seem to recall there was a bottle of Sancerre as well, and probably an abandoned walk. 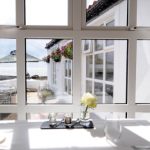 At dinner there is the option for 4 or 5 courses, with a choice of two for each course, plus a few tweaks for the non cream eater. The taste buds were kick started with a shot of a nicely sharp gazpacho, then the main business began. One might be accused of a lack of imagination in choosing smoked salmon: but the accusers would be proved wrong. A chunky little sliver of the finest fish had crispy wild rice for texture and miso caramel as a partner. The first hit from a forkful of ham hock was of the accompanying pickled cucumber and whizzed up piccalilli. These tastes quickly subsided, allowing the deep flavour of the ham to come through. I've never made a savoury panna cotta, and seldom eaten one. A pea version was sublime. I'm not quite sure how you can take an ingredient, make it part of a larger dish and end up with something which tastes fresher than the original. The broth for the coconut and shellfish broth was a creation of wonder. The base was apparently cooking liquor from lunchtime's mussels, with layer after layer of flavour added.

Is it halibut which is the king of fish, or is it turbot?  D and I had the former. Were we about to detect a slightly off note? Could our fish have done with a litttle salt? Yes, had it been served alone; however, marry it with the accompanying macadamia puree, cauliflower and vermouth sauce, and it was perfection.

Hibachi grilled beef is not, as we thought, a variation on wagyu, though the Japanese influence is there. Hibachi is a container used for grilling beef over charcoal. Pronounced pretty darn fine (the food, that is - we were neutral about the hibachi). Now here is the truly astonishing part. All four of us had pudding. I seldom trouble the dessert menu and I don't think I've ever seen J (known to many of you as the Curmudgeon) put anything sweet in his gob. Allegedly a cheesecake of sorts. Chef put the word in inverted commas, and had the good grace not to call it deconstructed. There were berries and a dramatically flavoured sea buckthorn sorbet. Another sorbet (bramble, I think) graced the non cream eater's plate, with more seasonal good things. The star of the show, however, was a chocolate cremeux, an elegant, sensibly sized dish served with cold bits and crispy bits, and almost guaranteed to turn a man into a pudding eater.

It's difficult for waiting staff to shine when they are masked, but Craig's team succeeded. A packed restaurant was expertly looked after by a cheery brigade, headed up by the estimable James.

It really is hard to over praise this place. Each dish was created with skill and subtlety, resulting in a plate which ended up being even greater than the sum of its parts. Some might say that Fife is over represented in the list of Michelin starred places: I would suggest that it is high time that someone from Clermont Ferrand sent some of his inspectors to Number 16.