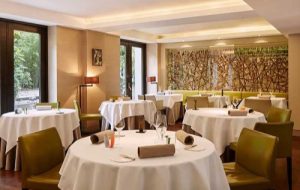 The Greenhouse - Alas, no more

What would Spiderman* do? If you are a prescient child who is foreseeing a problem, you might ask such a question. Having an issue with filling a restaurant review column, I posited a similar query. Next week it will be answered by all of you who responded to my appeal for your post lockdown desires. (Don't miss it, there are some crackers.) But today I looked for inspiration to this week's superhero, Jay Rayner, who featured in Wednesday's On The Side column.

Very many reviewers have turned to takeaways. While Jay has done that from time to time, he came up with the idea of turning to classic cookbooks and recreating dishes. Well, I have Tom Cooks!  for that. But wait.

We are in London, sometime in the early 1990s. I am on a mission to find Hay's Mews, somewhere in Mayfair, site of a restaurant which Jonathan Meades, restaurant critic of The Times has marked 10/10. From memory, only Raymond Blanc and a Chinese place in Manchester had previously hit those heights.

To digress, when the Saturday edition of The Times popped through our letterbox, it invariably started a fight as to who would get the magazine first. L was an assiduous follower of John Diamond, husband of Nigella Lawson, and his unbearably poignant account of his battle with throat cancer. I on the other hand was hungry for Jonathan, the finest of them all, the yardstick against which those following are measured and, in the case of Giles Coren, found wanting.

Jonathan has said that the chef at The Greenhouse is one Gary Rhodes. I'd heard of Rhodes. He had made his reputation at The Castle in Taunton, a hotel whose owner had demanded classical English food. Fine, said Gary, provided I can put my own spin on it. He went on to become a TV favourite. Although I didn't know it then, I had already seen him on the box appearing in a Keith Floyd programme. The same series also featured a very young Rick Stein. He knew how to pick em, did our Keith, even if he insisted on referring to Rick as Nick.

We solved the first mystery. The Greenhouse was (sadly it closed for good last summer) in the ground floor of an unassuming 1960s block of flats. A pleasant space, equally unassuming, then mystery number two. On a short menu, the main courses included Roast Chicken and all the Trimmings. How, in the name of Escoffier's waistcoat, can you get a perfect 10 with that? Put shortly, it was one of the most fabulous plates ever. The flavour of the chicken was turbocharged; stuffing was exquisite; the roast potatoes, it seemed, had been timed just for us. I'd been eating out for a fair time by the 1990s. What a lesson that was.

As was the dish which preceded it, today's hero. Smoked haddock (undyed, of course) is topped with a Welsh rarebit mixture, cooked then served on a tomato and chive salad. Not hard in theory - even the recipe for his rarebit topping seems nothing out of the ordinary - but I bet yours and mine come nowhere near Gary's. 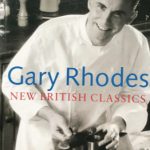 Inspired by Jay's column, one of which featured  New British Classics, I found a second hand copy. It was the book of the TV series of the same name. The very first recipe featured, yes you guessed, Smoked Haddock with Welsh Rarebit. I reproduce it below. I hope Gary's ghost won't mind. It is an indictment on British greengrocers that while we can easily source great smoked haddock, it is singularly difficult to find tasty tomatoes. If you do it Gary's way (and why wouldn't you?) the topping needs to be made well in advance, probably the previous day. 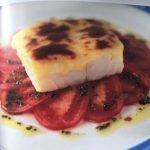 For the main event (serves 4)

First make the topping. Gary reckons this is the minimum sized batch you can make. Pshaw! these professionals. It will keep in the fridge for 10 days, and it will freeze. I find it interesting that there's no beer in the mix. He also seems to make the sauce the wrong round; however, he was a genius, so I'll trust him.

Melt the cheese in the milk. Do not allow to boil. When the mixture is smooth, add the flour, breadcrumbs and mustard. Cook for a few minutes over a low heat, stirring continuously, until the mixture comes away from the side of the pan and starts to form a ball. Season with the Lea & Perrins and s & p, then leave to cool.

When the mixture is cool, put it in a food processor, turn on the motor, then slowly add the egg and the egg yolk. Gary says you can beat vigorously with a wooden spoon if you don't have a food processor. When the eggs are mixed in, chill in the fridge for a few hours. The mixture will be very pliable and easy to handle.

Did you remember to take the haddock out of the fridge a good hour ago? If not, wait another hour, but use some of that to make the salad. Remember to switch off the oven and grill to save the planet. Blanch the tomatoes in boiling water to make them easy to peel. Gary says for 10 seconds - I usually find it needs a little longer. Cool in iced water, then skin and cut into thin roundels.

Put the haddock into a buttered oven proof dish. Flatten out a thin layer of the rarebit mix. Gary's recipe says 2 - 3mm, but his photo says different. Suit yourself, but not too thick. Put a layer on to each fillet, cook under the grill till nicely browned, then transfer to the oven (which you did remember to preheat) for 4 - 5 minutes.

To serve, make a circle of tomatoes on each plate. Season with a little salt and pepper. Add the chives to the vinaigrette and spoon over the tomatoes. Top with the haddock and serve at once.

*You can substitute any superhero or supervillain of your choice. You have 15,078 to choose from. No, I'm not making this up. Click here to find a website which lists them all. It's a great thing, the internet. (The figure was correct when I first posted this. It has now gone up to 15,106.)