This article is timed to coincide with Wednesday's On The Side column celebrating the delights of Castle Game Scotland. It features two dishes. The first is made using their wild boar sausages with Italian herbs, the second a great way to serve their venison leg steaks.

The lentils are a great accompaniment to many dishes. You just have to persuade people that the the green ones, cooked like this, will bear no resemblance to any poor quality red lentil soup which many Scots may have had to endure at some time in their lives. 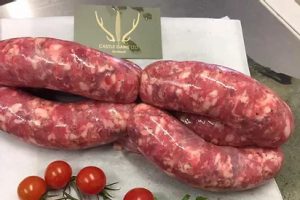 The Castle Game sausages are mighty beasts, about 12 cm in length and with a circumference not far off half of that. They are packed full of meat, with no obvious sign of filler. You could use any type of sausage, I suppose, but if you haven't been out to Trinlaymire Farm, try to get Tuscan style sausages, intensely porky and usually flavoured with fennel seeds. Cooking times will vary according to your choice of banger.

The most famous green lentils come from Puy in France, though Canada is the world's largest producer. Any green lentils will do. Like pasta, the end result should be al dente. 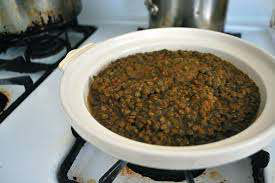 Get the lentils started first. You can do them in advance, or even the day before. Sauté the carrots and shallots gently for a couple of minutes in the oil, then stir in the bacon. Cook until the veg are almost soft. Rinse the lentils, add to the pan and mix well, then cook for a further couple of minutes. Add about two thirds of the stock and bring to a simmer. It will take about 15 - 20 minutes for the lentils to cook. Keep a close eye on them, stirring from time to time. You will almost certainly have to add more stock, though you may not need it all. The dish is ready when the lentils have a little bite, but are not entirely soft. The end result should be moist but have no surplus liquid.

Now to seasoning. If you have used a stockpot or cube, it is likely that no additional salt will be needed. Normally I season a little at the beginning and a little at the end. UNDER NO CIRCUMSTANCES add salt to lentils while they are cooking, or they will go hard. The same applies to other pulses. At the very end add a good slug of balsamic vinegar. Some recipes suggest a spoonful of tomato paste. I dislike this. For me it's the earthiness of lentils which makes them such a fine counterpoint to the meatiness of the sausages. The tomato gives the finished dish an extra sweetness.

When the lentils are simmering, cook the sausages. We are used to either grilling or frying them; however, with specimens of this size, they would be well frazzled before they were cooked through. Preheat your oven to 180˚C/Mark 4. Ideally use an oven proof frying pan. If you don't have one, preheat a roasting tray. In a frying pan brown the sausages all over and either transfer the pan to the oven, or its contents to the roasting tray. Cook for about 20 minutes.

TOP TIP - after you've removed a frying pan from the oven, do something to remind yourself that the handle will remain hot for a while. I believe in pro kitchens they sprinkle the handle with salt. We amateurs need something more obvious. A cloth or a piece of kitchen roll draped over it may go some way to avoiding scorched palms. 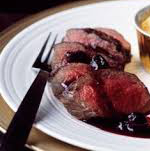 This is the recipe I referred to in my feature on the Castle Game boys in this week's On The Side column. It couldn't be simpler. Until I tried the leg steaks I would have used fillet. That works very well, but is much more expensive. As venison is such lean meat, it needs a sauce. A red wine sauce is traditional, but the sweetness of the port and the redcurrant mixture is a fine marriage, subject to two caveats. Firstly, you don't want the plate to be swimming in sweetness: I reduce the sauce to a coating consistency. Secondly, choose your veg carefully. As it's a very dark principal ingredient, you need some colour on the plate. Carrots alone are too sweet. Turnip (swede) is a traditional Scottish accompaniment, but many find it a little bit on the bitter side. To those of you who are in that camp, I say mash it well with a fair bit of butter, a lot of black pepper, and a good grating of nutmeg. Or do as I do. Have the best of both worlds. Cook equal amounts of carrot and turnip together. Drain, mash and season as above.

This is a difficult recipe to give precise quantities or timings. It will depend how thickly you cut the meat. You could do the steaks whole, or you could slice them into the thin medallions which we Scots would call collops. I prefer quite decent sized chunks. This allows you to get a good sear on the outside while leaving the centre rare or medium rare as you prefer. Do NOT overcook. Allow about 150g of meat per person.

Make sure the venison is at room temperature. Cut as you wish (see above) and season well all over with salt and pepper. In a frying pan heat the oil and butter to a fairly high heat and brown the venison on all sides. You want to see some caramelisation. As soon as the meat is browned, pour in the port and bring to a bubble. Add the redcurrant jelly and stir. It won't incorporate at this stage. Simmer for about 2 - 3 minutes, turning the meat half way through, until the venison is cooked. Remove the meat and set to one side. Increase the heat and reduce the sauce, stirring well. Check the seasoning. I don't usually season further at this stage. If you prepped the meat properly there should be enough in the pan juices, but adjust to your taste.  When the liquid is nearly at the desired consistency, lower the heat and return the venison to the pan. Turn the pieces of venison over so that the meat is well coated. Plate up and drizzle any remaining juice.