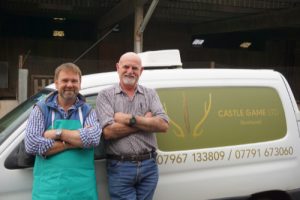 It's the middle of August. Andy Smith and Neil Gilmour should be celebrating the second birthday of their fledgling business, Castle Game Scotland. The truth is, however, that they are far too busy. I was introduced to them and to their wonderful produce some time before lockdown. L and I ventured out to renew the acquaintance and, more importantly, to fill the freezer. It then dawned on me that this is exactly the type of business which the On The Side column should be featuring, so I arranged to pop out again for a chat.

On a quiet day? There is no such thing. Andy was out doing deliveries and Neil was prepping an order of 34 young grouse and 3 kilos of langoustines for a customer in Cambridgeshire. It's the first week of the grouse season, and the chiller is choc a bloc with them. I've taken professional food writer Sudi Pigott, and the two of us learn a lot. For some reason, Scottish chefs seem to feature grouse only in the first few weeks of the season, and they want only young birds (one which is less than a year old, and hasn't moulted). How can you tell if the bird is young? Neil shows us three signs. The third wing feather hasn't developed (it's known as a pin feather), the skull is still soft, and no ridge has yet formed on the claw. Fortunately, restaurants down south maintain demand through the season, and will also take older birds. Many of these are made into sausages - who knew?

This is a business full of surprises. Andy and Neil met when they were both in the police, working in the counter terrorism unit at the Scottish Parliament. I assumed that this would have been firearms related, but it was more involved with dogs and searching every inch and cavity of the building on a regular basis. Both of them, however, shared a love of shooting and field sports. They operate out of a steading in West Lothian on the Hopetoun Estate. Andy's grandfather was a gamekeeper and he still does some keeping on a part time basis. He thinks he was nine when he first learned to shoot. 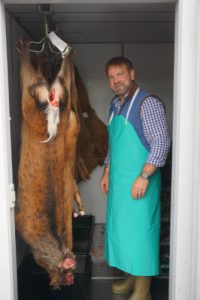 At the beginning, the focus was on venison. Roe deer are in season all year (bucks 1 April - 20 October; does 21 October - 31 March). Neil tells me that roe deer is the most common in Scotland, with a more approachable flavour than the stronger taste of venison from red deer. When time permits, they shoot much of their own, but buy in from known and reputable stalkers. Deer numbers need to be kept down these days, and the pair aren't short of offers to sell them carcasses. During my first visit, Andy explained how choosy they are. Firstly, the animal must have been cleanly and humanely killed; it must have been properly gralloched (gutted and cleaned) immediately; and care must have been taken in transporting the beast post mortem. That ensures that the venison on sale will always be of the highest quality.

As a cook I learned something new. I'd prepared fillet and haunch before. Usually, when you think of leg steaks you imagine a lamb gigot or veal osso bucco, cut across with the bone in the middle. I watched in some awe as Neil expertly cut a leg into steaks following the lines of the individual muscles. Seared quickly in butter and oil, then finished in a reduction of port and redcurrant jelly, the end result is sensational*. Many would be fooled into thinking they were eating fillet. Nothing goes to waste. They sell venison mince and two types of venison burgers, natural and the award winning Cajun burger. Both are fabulous. Did I mention awards? 2020 Best Game Butcher in Scotland. 3rd place in the Best Game Butcher in the UK, a ranking they're determined to improve on next year.

Lockdown saw them extremely busy, often with queues of cars down the bumpy farm track which leads to their premises which are just outside the enigmatically named Threemiletown. Slowly but surely, the world is beginning to realise what a fantastic product Scottish venison is. It's fat free, has great flavour, and you can't get more organic meat. And the same can be said for the array of game birds which are available in season. Some are available all year round - my freezer is seldom without a pack of pigeon breasts (cost £0.90 per unit).

In recent times they have diversified further, adding langoustines and scallops to the offering. Then it was steaks from prime Aberdeen Angus herds in Speyside, sirloin, fillet, ribeye or tomahawk. And if you want a prime cut joint for roasting? No problem - just phone in your order. The chances are you'll also be able to add some wild mushrooms to your order as a side dish. The one thing is certain - everything will be of top quality and at the keenest of prices. Out of interest I looked at London comparisons. At Fortnum & Mason, a kilo of sirloin will set you back £50. When I last visited Andy and Neil were charging £21.99.

Game is not the preserve of the rich. Andy has arranged shooting for everyone from dukes to dustbin men. If it wasn't for shooting estates, Scotland's moors and their wildlife wouldn't be managed. If that didn't happen, there would be few game birds. While both men are appalled at the suggestion that birds of prey may have been killed, they point out that without the ready availability of game birds, the raptor population would be under serious threat. I don't expect to convert anyone to the cause, but spend 10 minutes with Neil or Andy and you may reconsider. And while you're there, for a very modest outlay, you can have enough exceptional food to feed your family for a week.

*The recipe plus one with wild boar sausages will appear in Tom Cooks! this Friday

The list of restaurants whose doors have closed permanently continues to grow. Traveling between my home in Murrayfield and the West End of Edinburgh, I see that Magna Ungaria and Chop Chop have gone (though the latter will survive as a takeaway). I was saddened to see all the equipment and furniture being removed from Otro. (New Chapter is unaffected.)  Further into town, two of my personal favourites have left us. L'Escargot Blanc in Queensferry Street and The Wee Restaurant in Frederick Street won't be reopening. The good news about the latter two is that we can still enjoy their sister establishments, L'Escargot Bleu in Broughton Street, and The Wee Restaurant in North Queensferry.

Pizza Express (which was reported to be struggling even before lockdown) has entered a company voluntary arrangement (CVA) with its creditors. It will remain on our high streets for now, but in Scotland its branches in Holyrood, Edinburgh, Princes Square, Glasgow and Belmont, Aberdeen will shut their doors permanently.

The good news is that Stuart Muir and Paul Brennan of Dine have taken over the former Leopardo premises in Murrayfield Place. Dine Murrayfield should be opening its doors next month. Watch this space.

The Government backed Eat Out to Help Out scheme ended on 31 August. Edinburgh based Montpelier Group who run, among others, Tiger Lily, Indigo  Yard, Rabble and, of course, Montpeliers, have launched Eat Out to Help Out 2 in some of their venues. From the consumer's point of view the scheme will work in exactly the same way, a 50% discount of up to £10 per diner being offered on food and non alcoholic drinks, Monday to Wednesday. A number of organisations, including the Signature Pub Group, are doing likewise. This is likely to last until 30 September. Advance booking is recommended, and do check whether the scheme applies in your chosen venue.

My experience of eating out post lockdown has been almost 100% positive. Dare I say it, hygiene and safety standards are, in many cases, higher than they were in March. At the risk of sounding like a cracked record, get out there and give restaurateurs your support.

(And if I still can't persuade you, get out to Castle Game and treat yourself at home.)