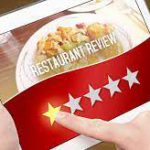 It's usually quite easy to tell when food has gone off. When restaurant reviewers are downright bad, it's sometimes harder to notice.

Last week was intended to be the last On The Side column of the year; however, a food review appeared on Saturday, which I felt I couldn't let pass. In the last Tom Eats! column, I commented that with one or two exceptions there are no Scottish based restaurant reviewers whose opinions I particularly respect. And lo and behold! A prime example falls into my lap.

I'm not referring to the capital's daily newspaper. The lady who writes on restaurants there blocked me on Twitter years ago, and I've given up caring. I do note, however, that she has a newish column which bears an uncanny similarity to the monthly Chef Watch which you will find here, right down to some of her standard questions being identical to mine. Having said that, it wasn't an original idea when I started it, so let's move on.

This was Chitra Ramaswamy in the Alba section of Saturday's The Times newspaper, reviewing Gordon Ramsay's Bread Street Kitchen. By coincidence, I had lunched there on the Thursday of that week - the review will appear in January - so I was interested to compare notes.

A headline will set the tone, Rich, dated and average: Gordon Ramsay (and his food) arrive. Well, this game is all about opinions, so let's read on.  A third of the column is devoted to Ramsay himself. A former footballer from Johnstone. Your point, caller? Albert Camus played in goal for Algeria - does that diminish his work? A curio. Someone whose story is a classic British up-and-downfall: a Jerry Springer style opera should really made out of it. This Decline and Fall description for me sits uneasily with someone whose company employs over 900 people world wide with annual turnover of over $44 million.

Then a thought came to me. Is it possible that Ms Ramaswamy dislikes Mr Ramsay? Only a hunch. There is reference to an open letter he wrote to his mother-in-law begging her not to sever links with the family. The implication is that this was because of Ramsay's behaviour - the moment is described in the article as unhinged and unbelievable.  No mention is made of the context. Ramsay had sacked his father in law, her husband, from Gordon Ramsay Holdings - embezzlement was alleged. The latter then went public in his vilification of the chef before being imprisoned for six months for trying to hack email records of the company. All sounds a wee bit different when you provide the full facts, Chitra.

The poor fact checking, and badmouthing continue. Bread Street Kitchen & Bar, she writes, is one of those meaningless names made up of nice words shoved together like Chicken Cottage. Two seconds on the Internet would disclose that the first of the chain was set up in London - in Bread Street. Let's laugh at the people who founded a hotel round the corner and named it The George Hotel. Address, George Street, Edinburgh. Or deride the railway company for naming their Glasgow terminus Queen Street Station. Another meaningless name. In actual fact, reading on, it's clear that Ramaswamy knew this fine well, as she refers later to the St Paul's branch, the one in Bread Street. Not lazy then. A tad malicious? I couldn't possibly comment.

We do eventually get on to what she thought of the restaurant. She has made much of the things she hates about Ramsay - macho, sweary, etc. But, of course he wasn't on the premises. She did mention executive chef Dan Ashmore. When I was there Dan was also at the pass and had it running like a silent, well oiled machine. I have spent two services in separate kitchens run by Dan and never heard so much as a D word, never mind the F word.

It's impossible to comment on a reviewer's assessment of service, as it can vary by the hour. This scored only a 6/10. As there seemed to be quite a long wait for mains - though how long did they take over starters? - this doesn't sound great. But perhaps we could have something written about it that wasn't gibberish? Busy-busy waiters looking as though they're working backstage at a Rihanna gig. Or The service is enthusiastic to the point of being gaslit. Does anyone have a clue what the woman is on about?

Having ambience as a criterion - this scores 6 as well - is just daft. We are told that the place was gleaming and that the view from the table was staggering. But the downstairs part of the dining room was quiet. (That would generally be a positive for me.) What, precisely, was the problem with the atmosphere to justify the low score of 6?  We are not told.

The food also scored a miserable 6. Objections seem to stem from the fact that either the blurb on the menu or the staff were enthusiastic about it. Nobody is saying that Gordon Ramsay invented Beef Wellington or fish and chips, but if you're proud of something you serve regularly, what's wrong with describing your version as a classic? (Oh, I forgot - it's Gordon Ramsay saying it.) Let's look at how our reviewer described the food to which she gave such low marks. Steak tartare - very good. Sirloin steak - a beautiful cut of well-aged meat. Fish and chips - good enough. (The chips are criticised for being a bit too crisp and wedge-like! When did you last hear someone slagging off chips because they were crisp?)

It continues in similar vein. Cranachan is spoken of disapprovingly as being a towering cylinder of cream shot through with whisky. Well it is on the menu as Single Malt Cranachan Cheesecake with Raspberry Sorbet. Anything else about the dish you're not telling us, Chitra? How was the sorbet? Or the cheesecake base? And finally she writes that the sticky toffee pudding is as good as any other really good sticky toffee pudding.

So can anyone explain the pathetic 6? Here's a word of advice. Why not just begin the review with, I really, really hate Gordon Ramsay, so I'm going to give this place a kicking? That way we could treat the page with the respect it deserves and use it to set the fire. The late A A Gill had the occasional regrettable tendency to take the same approach. The difference was that he could write like a dream, was insightful and could be very funny. The score for Ms R on those criteria? 0/3.