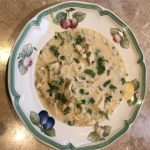 For today's recipes, my thanks are due to two remarkable ladies. The first comes from from Sarah Wyndham Lewis, who featured in this Wednesday's Food Producers feature in On The Side.

Avgolemono is the ultimate in simple, nourishing comfort food, quickly made and very sustaining. (The g is pronounced as the ch in the Scottish loch - Ed.) A staple in Greek domestic cuisine, every family will have their own recipe for this soupy rice dish. This is mine, adapted from one taught to me by a Cypriot chef who was a family friend. For us, it always follows on within a couple of days of roasting a good chicken; providing both stock and leftover meat. Although so lush in texture and flavours, it is a surprisingly low calorie dish  for people sensitive to such things.

More Fascinating Facts from Tom (Skip if you want to) 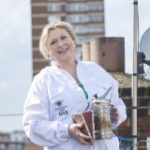 For some reason the name caught my fancy and I did a little more research. The literal translation from the Greek is egg-lemon. It is a family of sauces and soups which, as Sarah says, can be a soup or something more substantial. While it has its reputation as a Greek dish, its origins are elsewhere. In Jewish cuisine it is known as agristada or salsa blanco. Claudia Rodden has described it as the cornerstone of Sephardic cooking.

It is known that a version of agristada was made by Jews in Iberia before they were expelled from the country in the late 15th century. Records suggest that bitter orange juice or pomegranate juice may have been used in place of lemon. In Spain today avgolemono is known as sopa de huevos y limón.

Note that the amount of liquid will give you a stew. Use more if you want a more soupy dish.

Heat enough chicken stock to be able to cover the rice and add the fresh lemon juice. Bring to a rolling simmer and then add the rice. Stir well. Turn down the heat and continue to simmer gently. Add a really good sprinkle of dried oregano. Stir occasionally as the rice cooks.

When the rice is virtually cooked, take off the heat for a moment and gently trickle in the beaten eggs, stirring vigorously as you go to disperse through the mix. This brings a wonderful creamy texture to the dish.

Add salt and plenty of freshly ground black pepper to taste. Now is also the point to add more chicken stock if you would prefer a more soupy texture; more lemon juice too if you like.

Return to the heat. Add the cut up chicken pieces and stir through the mixture, continuing to heat gently so that the chicken is hot through and the rice becomes fully cooked.

Finish with the parsley, and other herbs, if using, stir through and serve immediately.

Best eaten on its own, but is delicious followed by a crisp green salad.

Variations to play with

Before putting the chicken in, you can add extra greens like spinach or wild garlic leaves to wilt/cook into the mixture. 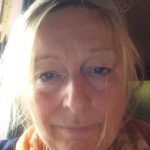 My excellent friend Janet Hood and I have known each other for a very long time. As well as being Queen of Licensing Lawyers, she is a very talented cook. I don't pretend to have sampled all of the recipes she has sent, as some of them sound pretty fierce. She assures me that this isn't all that hot despite the number of chillies, because they're put in whole. A word of caution on cooking times and temperatures. Janet is using the hot oven of an elderly Rayburn. Between the two of us we are estimating temperatures. The important thing is that the rice is cooked through and that it is crispy on top.

Put all the ingredients, apart from the rice, salt and pepper in a pan and heat until the milk is beginning to seethe (An excellent word. You don't see that in recipes so much these days - Ed) and the butter is melted. Remove from the heat, cover and leave to infuse for three hours.

Preheat the oven to 180˚C/Mark 4. Strain the milk (Janet doesn't, but girls will be girls) and bring it back to the boil. Put the rice in an oven proof dish and cover with the strained milk. The liquid must be at least 1cm above the rice at this stage. Bake for 20 minutes then increase the temperature to 200˚C/Mark 6 for another 10 minutes or until nicely crispy.

My thanks to both ladies. Smashing cooks and great characters both. You would like each other.