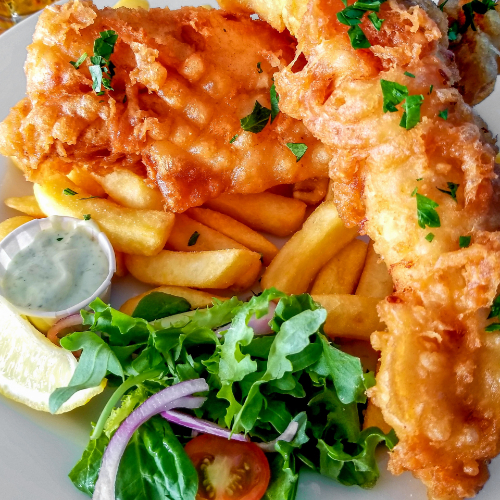 Don't be fooled by the headline. This column has not yet resorted to the delights of takeaway food; however, your diary will have told you, as mine did, that the first Friday in June is National Fish and Chips Day. Actually, your diary has played you false. This year, owing to a little local difficulty, the day has been postponed to 4 September. But my curiosity was piqued. Fish and chips still top the poll as Britain's most popular takeaway dish. Two components, but in the British mind almost inseparable. Fish without chips? Think Laurel without Hardy, Morecambe without Wise.

Twas not ever thus. For this chicken and egg type conundrum, it seems to be fairly clear that the fish came first. It also seems quite well established that fried fish as we know it today was brought to our shores by Jewish refugees from Portugal or Spain, and became widely available in London. There is reference in Dickens' Oliver Twist, written in 1838, of fried fish warehouses. Seven years later, celebrated French chef Alexis Soyer published a book entitled A Shilling Cookery for the People. (He is often described as the greatest chef of the 19th century. Descendants of Auguste Escoffier may beg to differ.). The book contains a recipe for Fried fish, Jewish fashion with the fish being first dipped in a batter of flour and water.,

So there we have it, right? Actually, probably not. The Larousse Gastronomique  has a section on fritters, i.e. any type of food covered in batter and deep fried, in which it suggests that the Crusaders may have brought the technique back from the wars against the Saracens. That doesn't help us all that much in pinpointing the origin. Saracen simply means Easterner and was a collective noun for the Muslim opponents of the Crusaders, including Arabs, Turks, Kurds, Nubians and Berbers. So the trail goes cold, but it does explain the link with Spain and Portugal.

If you thought that was obscure, you haven't researched your chips. In classical French cookery they are known as Pont Neuf potatoes. We know for sure that chips were being sold by street vendors in Paris near the Pont Neuf as early as 1780. US President Thomas Jefferson was a fan, and may have been instrumental in their introduction to the USA. At this point another rivalry rears its head. A much maligned people, the Belgians can claim credit for a long list of inventions including the saxophone and the contraceptive pill. And with one of life's little ironies, the nation which was responsible for the BMI index also claims to have invented the chip. In the 1680s, the story goes, the River Meuse froze over. Unable to get fish to fry, the good Belgian burghers cut potatoes into fish shapes and fried them. To this day, frites with mayonnaise is arguably their national dish.

Who first put the two together? Again, unclear. We know of two fish and chip shops which opened in the 1860s, one in London owned by a Joseph Malin, the other in Mossley, near Oldham in Lancashire, owned by a John Lees. By the 1930s there were 35,000 of them in the UK, down to about 10,000 today.

In Scotland, the spread of the chippy owed much to the arrival of Italian immigrants. While the first wave of settlers came from conditions of extreme poverty they soon established businesses, many in the catering sector, through sheer hard work and determination.  In Barga, near Pisa, where a huge number of the immigrants to Scotland hailed from, there is a two week festival of Pesci e Patate (Fish & Chips).

To this day the very best chip shop chips I have ever eaten were in Brindisi, in the province of Puglia in south east Italy. Forget Heston Blumenthal as the originator of the thrice cooked chip. Entering the shop I was surprised to see great banks of cooked chips in racks, with no obvious means of keeping them hot. Put in your order and a small (well actually quite large)  batch is cooked, just for you, in front of you. Sublime. If I could remember where it was, I would score it very highly.