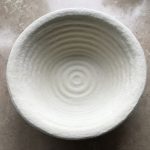 Begin with your Banneton

Now, whatever you do, don't misread the title. It does not say An Idiot's Guide To Sourdough. Such articles with their condescending titles are produced by experts who have decided to descend from Mount Olympus to impart a little wisdom to mere mortals such as you and me. Armed with their erudition, we will effortlessly produce something masterful, or so the theory goes.

At the height of the pandemic, basic bakers apparently majored on banana bread, while postgrads featured sourdough. I've been making my own bread (98% of household consumption)  for six years, to very good effect. I've written about it: I've even taught others how to do it. But sourdough? Nope, never.

I have meant to. I've bought the books, even spoken to the experts in person. I bought a banneton (the ridged basket in which the loaf sits for its second prove). But my starter never got started, and the mental roadblock for me was always not knowing what to do with said starter to get started. (And, as you will read, it still is.) The catalyst for today's piece (ending as yet unknown) was an overnight stay with Fife's Food Ambassador and Fife's Greatest Photographer. A fine looking loaf appeared in the morning. Ah, cried FGP, would you like a jar of starter to take home? No, I recoiled! Yes, decreed L. You can guess who won.

This article is now being written in real time. I have a jar of starter in my fridge and two reference books in bed for inspiration. One is by a Fife based Grand Master, a man who has forgotten more about sourdough than I will ever know. The other is by a very famous media baker, whom I'll simply call the Silver Fox.

It's a Sunday morning in which I have a vague portent of doom, knowing that my leaky defenced team, Manchester United, is scheduled to meet Liverpool later in the day. My mother always said I had a touch of the spaewife* about me.

I search in vain for the instructions on how to prepare my banneton for its first use. Fortunately YouTube is on hand. Dampen the thing, dust liberally with rice flour or semolina, then leave to dry. I add rice flour to the shopping list.

Trudge to Waitrose in search of rice flour. Find a small bag of ruinously expensive organic brown rice flour. It'll have to do. Lovingly prep my banneton, which seems indifferent, not to say downright ungrateful.

Sourdough starter is like the author: it needs to be refreshed on a regular basis. According to the SF you add 100g of flour and 100g of water. The GM, on the other hand, stipulates 100g each of white and wholemeal flour in addition to the 100ml of water. I follow him. The trouble is that while FGP has said it should resemble wallpaper paste, mine now looks like porridge. More liquid is added. 5 hours to lift off, counsels GM. 5 hours on, we haven't even started the countdown. A bubble free bowl. 24 hours says our Paul (for the Silver Fox is he, in case you hadn't guessed), so any chance of daily bread for Monday morning has now evaporated. Not the best Sunday ever.

Watch Manchester United being humped 5 - 0 at home by Liverpool. This Sunday just got worse.

Dawneth the bright morn. The SF says my starter should be bubbling and almost jelly like. 0/2 is not encouraging, but the volume has increased a decent amount. Bubbles? Depressingly few. All this angst, and we're only at stage 1. After 24 hours I decide there is no more time to lose.

By this stage I've decided against the folly of following two masters and am sticking with the Silver Fox. After I've measured out the required quantity of starter there is a heartening amount left over to return to the starter jar for next time. That's what's supposed to happen, so I'm mildly cheered. It's time to start making the dough.

250g of starter goes into my mixing bowl with 375g of strong white bread flour and salt. What else do you need? Water, obviously - but how much? Anywhere between 130 and 175ml says SF, unhelpfully. Start with 110, then see how much else you can get in. ****! You breadmakers will know (a) that wet is considered to be good when it comes to dough, but (b) that wet dough is not the easiest to work.

150ml later and my dough is an absolute bastard. If you've never made bread before, do not start with this. I have met its type before, surly and unhelpful. In the early days the likes of this tried to take advantage of me and occasionally won; however, the best piece of baking advice I ever got was, show the dough who's boss. I have to say that I ended up with a nicely smooth ball of dough which one could imagine becoming something edible in due course.

And when I say, in due course, forget the notion of the first prove taking a couple of hours. Or three. Or four. Five hours later, I'm still less than sure that one could say it had doubled in size. But time to move on to the second stage. According to SF your work surface and banneton (that's the basket which makes the line patterns on your loaf, in case you'd forgotten), both need to be dusted well with a combo of flour and either semolina or rice flour. A bit of knocking down and some folding - but don't let the dusting flour into the middle of your baby. Virtually no kneading needed, apparently, but more resting. At this stage for a normal loaf, it's an extra 30 minutes. You have to set an alarm to switch the oven on 15 minutes in before the thing gets too big. Well, no rush here. Today's little madame needs another five hours. I'm off to watch a programme with Gordon Ramsay, and find myself sounding more and more like him. It's 15.00 on Monday, and I began at 08.00 yesterday. 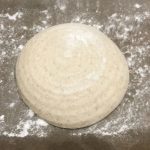 A Reason To Be Hopeful

The dough has risen, though probably not as much as I might have liked, and the oven is on. I tip the contents of the banneton on to a lined baking tray. Not bad. Next question - how to slash the surface? At this stage, you may ask yourself why? I've been doing it as a matter of course for years, and can't remember the reason. I think it's to stop the crust rising above the loaf itself. The book suggests a single slit. How dull. Getting carried away I carve a flamboyant # sign. Squint, as usual - I am no artist. 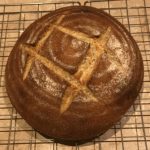 Not Bad For A First Attempt?

A roll of drums please. As you'll see, it looks pretty good. It lacks the dome of the big beasts you see in the shops, but bears a passing resemblance to the picture in the Hollywood book. Bizarrely, it probably could have done with those extra 5 minutes. It doesn't have the air holes as it should. This undoubtedly has something to do with the lack of bubbles. But it tastes fantastic.

I'm already thinking about how to improve the next one. Top tips and ideas, please.

* Scots term for a fortune-telling woman