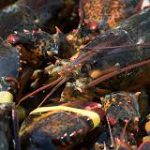 We were fortunate that the beginning of the end of lockdown coincided both with some cracking weather and the 70th birthday of a good friend. As a result we were able to fulfill a promise to cook and serve a celebratory meal while sticking to the rules. Nothing shouts swank! more loudly than lobster, so off I toddled to Mr & Mrs Welch's fine Fish Emporium. Now all of you who have your pals who can source you the critters for 11 quid a kilo, I envy you, but I'm more than five miles away from you so I can't put you to the test yet, though I will. Anyway, to quote the punchline of an excellent joke told to me by a dear Jewish friend, somebody's got to buy retail. 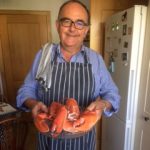 There is really no point in buying lobster which is already dead. The flavour fades very quickly after cooking. I was at a disadvantage buying on a Saturday for a meal on the Sabbath, but L refused to let me keep them overnight in the bath. Sometimes that lady is downright unreasonable. Just before cooking, kill the lobster by inserting a sharp knife into the brain.(You will see a convenient cross at the head.) Have your salted boiling water ready and put the lobster in straight away. If you don't it will continue to walk about for a while. This is most disconcerting. Remember to remove the rubber bands on the claws before doing so.

Ingredients (serves 4 as a starter)

Remove the meat from the body of the lobster. Try to extract the claw meat in a single piece. and reserve. Put the claws to one side and chop the remainder into smallish pieces. Combine equal quantities of mayonnaise and yoghurt with a squeeze of lemon juice. You don't want too much as this will mask the delicate flavour of your expensive crustacea. Stir in the lobster, celery and apple, and season with black pepper. If not using immediately cover and refrigerate, but remember to remove from the fridge at least half an hour before dishing up. Serve with a wedge of lemon and some more pepper. Garnish with some salad leaves of choice, and one claw per plate. 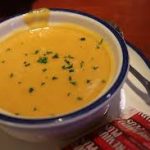 I was searching for a recipe. There are many. For fish and shellfish, a regular go-to for me is Jane Grigson's excellent Fish Cookery. Well, Mrs G, with regret you're bumped. The woman uses a whole frigging lobster. Sorry, but that's my soup budget for half a year. You will note in the last recipe that I made no mention of anything poncy such as serving the lobster in its shell. Do that, and you have no basic ingredient for this soup. ALWAYS reserve the shells if you can. Make sure you clean out any soft inedible parts from the body and head.

My version is interesting as well as economical. When I made the stock I feared I was going to end up with something fairly tasteless, hence the fish sauce listed among the ingredients. In fact the end result before the cream was very strong. Taste as you go is generally good advice: in this case it's essential.

1 onion, finely chopped; 1 stick of celery, finely chopped; ½ small bulb of fennel, finely chopped; ½ red pepper, finely chopped; 2 cloves garlic, peeled and crushed; 75ml brandy (cooking brandy that is, not the best stuff); 2 - 3 squeezes of tomato purée; 3 tbsp rice (virtually any type of white rice will do, but NOT brown); nam pla/fish sauce; Tabasco; double cream; (the last three are all, to an extent, optional. I used them all, but with care); lobster stock; olive oil; pepper.

Make the stock first. Put the shells in a pan and break them up a bit. The end of a rolling pin is good for this. Pour in just enough water to cover the shells. Add the chopped vegetables, bring to the boil and simmer gently for about an hour. Allow to cool, then strain.

For the soup, gently fry the veg and garlic in the oil without browning. When they are soft, add the brandy. Increase the heat and bubble until it has almost evaporated. You are burning off the alcohol but retaining the flavour. Stir in the tomato purée, and cook for a few minutes before adding the stock. Because I was concerned about the flavour, I boiled it for a few minutes to allow it to reduce a bit. Add a little fish sauce and a few drops of Tabasco. (Remember what your mammy used to teach you - you can always add, but you can't take away.) Chuck in the rice - it doesn't much matter which type you use, apart from brown, as you're going to cook it to oblivion. Simmer the soup until the rice is completely soft - i.e, overcooked - no al dente here, please.

Allow to cool slightly then liquidise or blitz with a hand blender. If in a restaurant kitchen you would probably sieve it. I didn't. Check the seasoning. I would add pepper but no salt, and you may wish a little more fish sauce and/or Tabasco. Mine needed a bit more fish sauce. If you are going to add cream, it will need to taste quite strong at this stage. The amount of cream is up to you - I used only about 100ml. It would be a great shame, after all that hard work, to mask the flavour of your masterpiece.

This is the posh, creamy version, so it doesn't demand the rouille, croutons, and cheese of its Mediterranean cousin. So If that's what you're looking for, omit the cream, and research for yourself how to do those other things. They are very fine, but right now I am relaxing, luxuriating, and feeling unbelievably smug, remembering that in the past I would have been stupid enough to throw those shells away.