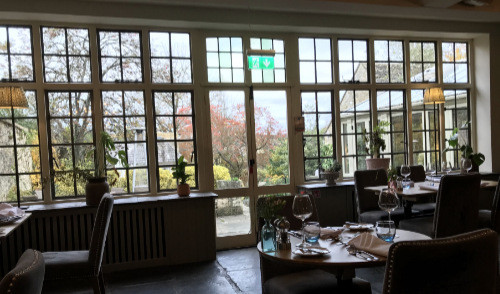 Stand at the top of the hill before descending into the rural idyll that is epitomised by Burford and pause. Hard to believe that this was once one of the richest parts of England, the wool trade creating fortunes for the few, and high employment levels. Around these parts you also had the quarries, producing not only the distinctive honey coloured stone for the churches and manor houses, but also for use further afield. Much of St Paul's Cathedral was constructed from Cotswolds stone.

This wealth was reflected in the public buildings, most notably the churches. I suspect that neighbouring towns would vie with each other with the size and elegance of their places of worship. As wool production itself began to be affected by Spanish competition and higher taxes, the area became an important weaving centre. Charles II would stay here with Nell Gwynn when they came to the races at nearby Bibury.

Burford itself was an important coach stop, resulting in the development of inns, many of which survive today. They would compete with each other for custom by providing ever more sumptuous meals, Burford Bait as it came to be known. That's a good ruse for attracting a restaurant reviewer, but in the intervening centuries things didn't run that smoothly. In Laurie Lee's time, life was pretty hard, till 20th century tourism brought a new wave of travellers. 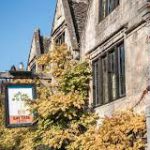 It really hadn't been the intention to have a Tom Eats! quality meal here. Blame, or, rather thank, The Great Plague. The Bay Tree's one way system meant that we entered via a side door, with no menu on display. Expectations were of a basic pub lunch. Like so many Cotswold buildings, The Bay Tree is delightfully random. Pass reception, head down some steps into a sort of holding area. Behind you is a snug little room with a log fire large enough to roast a brace of oxen. Then down again into a wide elegant space looking out on to a garden which must be a delight in summer. Goodness.

A brief Puritan moment hovered. (We do know that Oliver Cromwell spent time in the town doing unpleasant things.) Are we really ready to do justice to the rather stunning looking a la carte which was presented? It took a good thirty seconds for that nonsense to be banished and a glass of red ordered. First impressions for me include the initial reading of the menu. A very famous chef has just opened his first venture in Edinburgh. Last night I read his bill of fare online and yawned. Here, my taste buds began to sing. A huge selection for lunchtime in quite a quiet dining room. Six starters, eight mains. No, sorry, four starters. The wild mushroom croquettes were being made and the pumpkin ravioli were off. Still plenty to chose 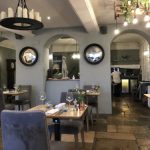 from, but they really should tell you that before  you order. One point deducted.

Never mind, it all got better and better. French onion soup can be thin and flavourless. This one was made with stock of real depth, and the right quantity of correctly caramelised onions. The very best one for many a year. The chicken liver parfait listing was intriguing. Served, the menu said, with dark chocolate layers, pickled raspberries and toasted ginger and thyme brioche. Chocolate? Are you kidding? Pickled raspberries - really? The result was a triumph, so much so that we're thinking of copying it.

The baked cauliflower mornay came in the form of a cauliflower steak, with cashew nuts, cavolo nero and black truffle. It tasted very much better than one might have anticipated. The star, however, was my venison dish. Loin, cured shoulder and faggot (with all these churches a trinity seemed appropriate) and sundry other good things. I forget what they did with the shoulder. The loin was merely perfect, but, bizarrely, it was the faggot which stood out. I couldn't place the seasoning, but I'd happily have scoffed a bowlful.

We were looked after by a couple of lovely ladies, so nice that I'm going to give them back the deducted point. They say the best presents are the unexpected ones. Had I been going out looking for an elegant dinner, this would have delighted me. To be served this when the brain was expecting fish and chips was just sublime.