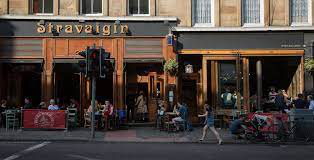 Stravaig - To wander; to go about aimlessly and idly.

Pah! Nothing could be further from the truth. A stravaig? Nay, This was a quest, an adventure, an expedition. Getting out of town; on public transport; reuniting with Scotland's Greatest Ex Journalist for the first time in a year or two. And heading for one of Glasgow's best loved eating places. Nothing aimless about that, let me tell you.

I was last here to celebrate the graduation of middle child. She will not thank me for telling you that that wasn't yesterday. Just the one visit, yet a lot of fond memories. It's that sort of place and has been for a good quarter of a century now. Since that was in the pre Tom Eats! days I haven't a clue what we ate: I simply remember a good time being had by all. That constitutes a reputation in my book, and reputations can be difficult to live up to.

I really shouldn't have worried. Despite the fact that she was wearing a mask, you could sense the smile of welcome from the lovely Katie who ushered us in. It was like entering the home of an old friend. And with an old friend. Darn good start.

The menu is decidedly ecletic. The first thing you see is a selection of a dozen or so dishes under the heading Small Plates. There's also a section entitled Strav Staples with Soup of the Moment and Curry of the Moment, burgers (beef and veggie), haggis (real and veggie) and West Coast Mussels, the latter with Phetchaburi pineapple, of course.

We tried most things from the small plates column. A menu with so much fusion food on offer can easily, from an unskilled kitchen, result in disaster. In the unlikely event that you're interested, come with me (and Strav) on a brief world tour. You're probably familiar with chimichurri. The Uruguayans and Argentinians both claim proprietary rights. In original form it features parsley, garlic, chilli and oil. I'm not terribly fond of it, but the sorrel version worked a treat with fat scallops, also served with a little caviar. The advertised smoked potato didn't register with me, probably because there was so much else to ooh and aah about. Probably dish of the day.

Hands up if you know what type of seaweed okara is. Well, if your neighbour raised a hand, he or she is a fibber, because it ain't seaweed at all. The billed Crispy Okara Seaweed Cake is a tad confusing. Okara is the soy pulp left over after you have strained the liquid either for soy milk or to make tofu. As far as I can make out, in this dish you season it with nori (Japanese seaweed flakes). The end result is akin to a fish cake, perfectly nice if unremarkable. The other tribute to the deep fryer's art was crispy fried chicken with peanut satay, chilli and green papaya salad. It packed crunch, bite and heat. My kind of dish - and they didn't insult our intelligence by warning that it might contain nuts.

So that's us done Argentina and Japan (whence comes furikake, a type of seasoning). Next, to Thailand for the peanut Miang, or Miang Kham as they would call it. And also for the Phetchaburi pineapple. The menu doesn't stipulate whether it's breed 1 or 2, the latter first appearing in 2019 after a breeding programme lasting 34 years. We return to Europe for the bitterballen, a type of Dutch meat croquette, excepting this version which is made with oyster mushroom and Taleggio cheese. Chef must have been having a lot of fun when he compiled this menu. I've had a ball researching it, but the most pleasure was had by SGEJ and me happily munching our way through it.

I hope I'm not making the place sound pretentious, as it's anything but. The plates come out steadily, brought by Katie and her equally smiley colleague Marquis (as in de Sade, he explains helpfully). I won't go through everything we ate, but other hits included lamb rump with za'atar yoghurt, peas and burnt onion, heritage tomato panzanella, and roast broccoli with smoked chilli and pumpkin seed furikake. While some dishes were better than others (the lesser ones being merely very good), all of the combinations worked. There was nothing out of place, and no jarring sensation that chef was merely showing off, as can happen in places with so much of the F word (fusion) on display. It's really only when sitting down to write this that the huge range of ingredients has dawned. An artist who can handle such a broad palette is to be much admired.

As usual, no room for puds, which included Hoos chocolates - a joke (hoos = house) - not an ingredient, pandan curd (Malaysia), Horchata chocolate (Mexico) and tepache (Mexico again). By now you may be thinking you should get out more. With foreign travel tricky at the moment, why not book a table here instead? But don't stravaig - go directly, with purpose, and with great anticipation.