What's in a name? Persia. A land of eastern promise, perhaps. Of Arabian nights in airy palaces. Being refreshed with cool sherberts and stiff muscles being anointed with perfumed oils after arduous journeys on a camel train. Connotations of luxury and exotica.

Iran? Rather less so. Visions instead of angry, bearded ayatollahs in a permanent standoff with the West about matters nuclear. Prominent displays of arms and artillery on the streets of Tehran. But both the same country.

I've never visited, but I suspect that the ordinary people haven't changed all that much. Gentle, hospitable, as fond of a celebration as any one of us here. One important distinction, of course, is that while our parties may be fuelled by alcohol, the focal point of theirs will be food. Lots of food. It's not a cuisine I would claim to know well, apart from staples such as hummus or baba ganoush, and of the examples I've tasted, I have no means of knowing how authentic or otherwise they may have been. Time to call in an expert.

My redoubtable friend Mr C is an old Middle East hand. Not only has he travelled widely in the region, he has managed hotels there. Accordingly, he was tasked with finding the venue for today's feast. And thus it came to pass that we found ourselves on a street south of the River Clyde in a part of the city which, it is fair to say, is not its most prepossessing. Sholeh (the name means fire or flame) is a bright modern building, which does make it stand out from its neighbours.

Thursday lunch isn't a prime time for Persian food, I guess, and the place was empty when I entered at quarter to one. It's a fair size, with booths on the ground floor and quite a few tables on a gallery upstairs. I resist in vain a bad joke about a meze-nine floor; however, as the Persian word is mazeh, not meze, I retract it immediately. A selection of small plates and flatbreads is, for me, one of the delights of Middle Eastern food. There are a dozen to choose from, mostly around the four pound mark, but for £16.95 you can have five plus a naan bread. 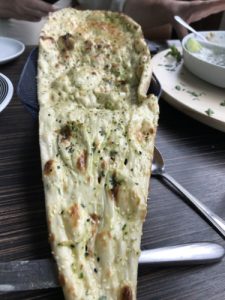 Garlic Naan - Too Big for the Camera Lens

The first of the day's surprises. I had always thought of naan as an Indian dish. In fact the word is Persian in origin, simply meaning bread. According to the menu the naan here is cooked in the same way as is done in India, plastered to the side of a tandoor, or clay oven. Speaking as one who has attempted to do this in a pro kitchen, I can tell you that the process is truly terrifying. Whisper it, but Indian style naan is not a favourite. But in Sholeh what you are brought is something thin and crispy, blistered from the tandoor, but lighter and crunchier, more akin to a freshly made pitta. Delightful, and a perfect vehicle for our mazeh, five huge bowlsful.

Mr C couldn't go past the very good hummus and baba gnoush (not a typo - no "a" in the Persian version, apparently). As well as chickpeas and aubergine, yoghurt features significantly. Mast-o Khiar contains cucumber and mint, a more sophisticated version of Indian raita, while Borani was thicker, with spinach and garlic. The undoubted star of the starters was Mirza Ghashemi, a remarkable combination of aubergines, tomatoes, caramelised onions, garlic, spices and, apparently, eggs. Served warm, this was food of the Persian gods.

There is, as you would expect, a wide range of barbecued dishes, mostly chicken and lamb, but a whole seabass is yours for under seventeen pounds. The combination dish, Sholeh Mixed Kebab for Two, was particularly good value, featuring generous portions of chicken and lamb, both marinated then cooked to succulent perfection in the clay oven on skewers. It also came with two portions of lamb kebab. Now forget the horrors of slivers of indeterminate protein carved from an elephant's leg-style hunk in places of doubtful hygiene: forget, too, chunks of fatty lamb mince clumsily wrapped round skewers. This was very finely hand chopped lamb, delicately seasoned, and formed into a long, flat, skinless sausage of delight. The combo came with either two portions of naan or two of saffron rice. We ordered one of each. At the suggestion of the lovely Azar, who owns the place with chef husband Vahid*, we chose the garlic version. Not far short of half a metre in length it dripped glorious green garlicky loveliness. Digging further into the menu I came on real terra incognita. I would have loved to sample some of their specialty dishes. One such, Baghali Polo ba Mahiche, features lamb shank and is available only of a weekend. We had probably already over ordered, but were intrigued by a section entitled Khoresht, slow cooked side dishes, either meat or vegetarian. We went for a veggie Ghorme Sabzi, a subtle soupy affair with parsley, coriander, mushroom, chives and red kidney beans. Mr C was impressed with the overtones of fenugreek: I loved the base sourness of the sun dried lime. Quite unlike anything I've ever eaten before - which was, of course, the object of the exercise.

At the time, there was no possibility of eating a pud without danger to life and limb, and I didn't even consult the carte. Looking at it online, you find an interesting selection. While there are one or two western crowd pleasers such as cheesecake and chocolate fudge cake, rosewater and saffron feature extensively along with sorbets and baklava. I was particularly intrigued by Havij Bastani, freshly squeezed carrot with ice cream. Reports, please.

(*At this stage I issue a fervent prayer that I have got chef's name right. I wrote it down at the time, but the b****y spell checker corrupted it.) He came to Scotland twenty years ago, and spent three years getting established before Azar and their son were able to join him. Just imagine. Iran's loss is Glasgow's gain. Being family run made surviving the pandemic a little easier, but it's been tough. It is great to see them getting back on their feet. Azar asks where we are from. When I tell her, she says they have a loyal group of diners who visit from Edinburgh on a regular basis. No fools they.

It's always a pleasure to chew the fat with Mr C. This was a particularly appropriate venue to hear of his many friendships in the likes of Egypt and Jordan, including his chum who is an established guide to Petra. Then a thought occurred.

Mr C,  I asked, are your pals aware that you made your living making and selling some of the finest pork pies known to Man?

Curiously, Tom, he replied, the topic of pork never enters the conversation.

Proving, I suppose, that in life as in restaurant reviews some things are best left unsaid. What I won't leave unsaid is my firm exhortation for you to take yourself and anyone else whom you love to eat here. I have no idea whether it is easy to reach by public transport - I drove and there was plenty of parking (see below) - but even if you have to hijack a magic carpet, make the trip.

When I returned to my car after this lunch I had a parking ticket. My own fault. I hadn't overrun my time, but the parking voucher was upside down on my dashboard. I appealed in the following terms-

When I left the car for the first time, there is no doubt that the ticket was visible. I checked, as I always do. I then remembered I had left my phone in the car and went back to get it. I can only assume that it was caught by a gust of wind. I attach a pdf of the voucher.

I am a food writer and was visiting the nearby Sholeh restaurant. It is hoped that my glowing review will bring many more people to this part of town to boost the revenues of your parking machines. I do apologise for the inconvenience caused by my carelessness but hope you'll agree that, having paid £4 already, another £60 would be excessive. Such barbarism is to be expected here in Edinburgh, but I know that Glasgow operates with much higher standards.

The very lovely Linsey Robinson, Area Operations Manager, has upheld my appeal, with a firm warning not to be so careless in future. No mean city, indeed.