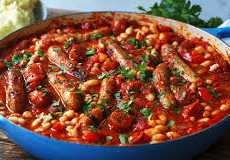 I share at least one thing with Nigel Slater. Not, sadly, his cooking ability - how many know that he trained as a chef at London's Savoy Hotel? I refer to his love of seizing on an ingredient or two, then building it into a dish off the top of his head.

This one came to life before Christmas. I pondered whether I'd left it too late to be seasonal in today's column, but with the rain lashing down outside and the mercury low, I reckon a March warmer is in order. L and I had decided it was time to go through the freezer and get rid of some older stuff. In normal times this would have been to make space for all the forthcoming festive spin offs - litres of stock, vast curries made from leftover turkey, that sort of thing. No need last year, but not a bad habit to get into, I suppose.

This trawl yielded a pack of sausages. With onions and mash, perhaps? No, we had mash last night. Oh, and I also found  a haggis, one of the ones in a sausage like casing. In the fridge there were a couple of slices of black pud and a pack of some mixed charcuterie. The germ of the idea was there. Sausage and beans. And no, I wasn't planning (and virtually never do) on opening a tin of Mr Heinz's horribly sweet concoction. My thinking was going in the direction of Boston - land of the bean and the cod/ where Lowells speak only to Cabots / and Cabots speak only to God.

Sadly, I was out of pork belly, so it wasn't going to be authentic. The brain headed instead towards the south west of France. Scottish cassoulet - how pretentious is that? Well, a bit, I suppose, but cassoulet is just a bean stew, enhanced with all the things a Perigord farmer's wife happens to have in her store cupboard. I can't help it that hers is more interesting than mine. I hadn't originally intended to use any of the haggis, but near the end I decided that my sausage and beans needed some more earthiness, so in it went along with the black pud. If I'd had any bacon I would almost certainly have cooked it with the onions at the start. The end result was rather good, but definitely not a slimming dish.

In the southwest of France they take their cassoulet very seriously. If you know the right people and your bean stew is up to scratch, you may one day find yourself being inducted into the Grande Confrérie du Cassoulet de Castelnaudary, one of these strange organisations beloved of the French. I'm never entirely sure whether they are entirely po-faced, or just a tongue in cheek excuse for a regular knees up. Click on the link to find out more about them and to listen to their hymn. One fine day I'll look out a recipe for the real thing, which almost certainly will contain no tomato.

Ingredients (serves 4, but if serving people with hearty appetites, add another tin of beans)

In a large deep frying pan, brown the sausages all over on a medium heat. This will take about 5 minutes. Remove from the pan and set to one side. In the same pan, lightly brown the onions with the garlic, stirring continuously. Add the chorizo and cook until the oil starts to ooze out. Add the beans and mix well with the onions and chorizo. Return the sausages to the pan. Stir in the tomatoes. Add the vinegar, Worcester sauce, chilli flakes and pepper. (With any dish containing pulses, don't add salt until the end, as the beans will go hard.) Cover and simmer until the sausages are cooked and the liquid has reduced. Chuck in the haggis and black pud and fold in. Cook for another few minutes, check the seasoning and serve. The dish will not suffer from being made in advance.