A History of Food and Class in Britain 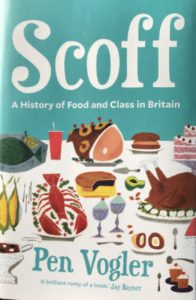 When I first heard about the subtitle to this wonderful work, I immediately had reservations. Was it going to be some socioeconomic diatribe with an unremitting left wing agenda? After all, writers as diverse and powerful as Dickens and Orwell made much of food and its imagery in their depictions of the poor and working classes. And aren't we all perhaps guilty of making certain value judgements based on the contents of the supermarket trolleys of others? Typhoo v Earl Grey; Golden Shred v Oxford; Mother's Pride v sourdough.

As Ms Vogler states at the outset, one recurring theme in our food choices is how we reject food from previous generations because of our worry about its social status. Now, lest you might be sharing my initial misgivings, allow me to reassure you. This is a wonderful skedaddle through the centuries of British food, celebrating its glorious external influences, explaining the whys and hows of its many changes, and producing many a wry smile (or, in some cases a belly laugh) about our culinary foibles. It must also be said that this is the fruit of considerable research. Pen (I'm going to take the liberty of using her first name from here, as I sense a kindred spirit) has previously written books on the food of Dickens and Austen and there are 21 pages of references; yet she wears her vast knowledge lightly.

So where to start? The north/south divide of tea v dinner is obviously examined, as is the perhaps less well known history of the timing of the day's main meals and why. Everyone without exception will learn much. The hearty English breakfast? It was introduced from the great houses of Scotland and Wales. Its evolution is also explained. Kedgeree from India; the roast beef of Old England tradition continued by a baron of beef being an ever present on the breakfast sideboard at the court of Queen Victoria. Then some modern innovations from the 1960s and 70s when fried tomato and mushrooms edged their way onto the plate, as did, if you were particularly unlucky, baked beans. (I told you the lady was a kindred spirit.)

When one thinks of the English labourer with his lunch of a hunk of bread and cheese, why did it take so long for the sandwich to evolve? Well, have you ever thought about the type of knife you need to slice bread properly - and the fact that it wouldn't be found in the average home? Regular readers of this column will be aware that so many foods we take for granted today are relatively recent introductions. Read Pen's sections on fish and chips, avocadoes and chocolate and they may sound familiar. Now I hadn't read her book in advance of my columns on these, and I'm pretty sure she had never heard of me (though we now follow each other on Twitter): I think we just did our research in the same places. Except hers is far more in-depth than mine, and has swelled my trivia coffers no end.

Tomatoes, when first introduced to this country, were treated with the utmost suspicion. Even in Italy it took a while for them to catch on and be bestowed with the title of golden apple (pomodoro). Yet their struggles were as nothing compared to those of the potato. In 1748, a century and a half after Walter Raleigh brought it back from the new world, the French Parliament passed a law forbidding its cultivation. Why? Because, they said, it caused leprosy. It took the research and efforts of Auguste-Augustin Parmentier to gain respectability for it. To this day, if you see a dish on a French menu with the name Parmentier, you will know that spuds feature in one way or another. Interestingly the potato still struggled to be generally accepted in England (as opposed to Scotland) because of its association as an Irish peasant food.

Such examples are legion. Samuel Johnson was appalled that we Scots ate oats, which he regarded as horse food. For the same reason many nations are astonished that we eat turnip (swede). The French (who can give any nation lessons in food snobbery) are horrified at the idea of humans eating corn on the cob. And so on.

I could write a review twice this length, as there is so much to enjoy. Anyone with the slightest interest in food history will find many surprises. When did we become a nation of pasta eaters? Write down your answer and read on. One of the most surprising chapters is entitled Macaroni: and other Olde English pastas, in which we learn that pasta eating was recorded in England as long ago as the 1300s. After all it is just water and flour (egg pasta is posher, even in Italy).

Ah, flour and, of course, bread. I can't begin to summarise all the complexities and nuances described here. But a great piece of research might be to collect as many sayings as you can which come to us from milling and bread making. I mentioned earlier pieces of trivia. What is the origin of the word barmy? Or why is bully beef so called (clue - nothing to do with bread)? You will find the answers here and so, so much more. The book may seem a daunting size, but it is split into very digestible sections - some of them the small plates so disliked by our Pen. You can devour it from cover to cover, as I did with great gusto, or you could snack on it over a long period of time. This should be on every food lover's bookshelf.