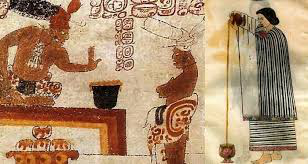 If you want to begin at the beginning, you will have to go back about 4000 years to what is now Mexico. Archaeologists have established - I know not how - that chocolate beverages were being consumed from that time. The word they use for those early consumers is Mesoamericans, whose area stretched from modern day central Mexico down to the north of Costa Rica. Chocolate history, however, concentrates on two particular peoples, the Mayans and the Aztecs. 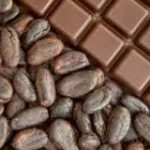 Researching this was full of surprises. Although they were big fans of the stuff, often combining it with chilli, the Aztecs were unable to grow cocoa, as their climate was unsuitable. They either imported it or, later, as they took control of much of the region, required taxes to be paid in cocoa beans. I'm using the British spelling of cocoa. Much of the world would use the spelling cacao and pronounce it accordingly. When the Spanish (yes, Christopher Columbus again) got their hands on it, that name presented a problem as it was virtually identical to caca, Spanish slang for s**t. Instead they preferred the Nahuatl word xocolātl, from which they derived the word chocolate.

But the biggest surprise for me is how anyone ever got round to making an edible product from the cocoa bean at all. To reduce the manufacturing process to a nutshell (sorry), you have to ferment the beans, then clean, dry and roast them. Then you remove the husk to get at the cocoa nibs. Then you grind the nibs (right) to a paste known as cocoa mass. This you liquefy by heating to produce chocolate liquor. You then cool that and process it into cocoa 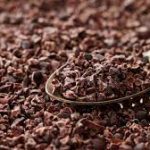 solids and cocoa butter. Still with me?

Until the 19th century, chocolate existed only as a drink. Europeans started to sweeten it with honey or sugar, and vanilla was sometimes added. The flavour would be coming closer to that which we know today. Consumption was given a boost in 1662 when Pope Alexander VII declared that drinking chocolate on fast days didn't break the rules. The 19th century pioneers of chocolate bars and sweets contain many well known names: Fry, Cadbury and Rowntree in England; Nestlé, Suchard and Lindt in Switzerland. By this time, cocoa was being widely grown in west Africa. This had the unfortunate consequence of boosting the slave trade. Even today in the Ivory Coast and Ghana, which between them grow about 60% of the world's cocoa, there are serious concerns about child slavery and exploitation.

Like many foodstuffs in the 21st century, chocolate attracts a fair degree of  snobbery. As with any product, it is possible to cut corners. Costs can be cut by reducing the percentage of cocoa solids, or by substituting some other fat in place of cocoa butter. It was this latter point which, some years ago, had the EU threatening to rename British made chocolate as vegelate. It took nearly 30 years before our manufacturers won the right to sell their bars as chocolate in France and Italy. The percentage of cocoa solids is another one for the purist, with good enough reason. A well tempered (sorry, we don't have space to go into that) bar of 70% cocoa is a very fine thing, but beware high numbers alone. Even in supermarkets one can see bars of stuff labelled 90%: for my own part, I find that virtually inedible. Having a dislike of any type of food fascism, I very much believe that it's down to personal taste - provided you know precisely what you're eating. In common with millions in this country, I have a soft spot 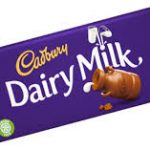 Now we could go on to discuss the respective merits of criollo, forastero or trinitario beans, or the properties of dark, milk or white chocolates, or consider the complexities of conching, but I fear your patience has been sorely enough tried already. The industry as a whole is worth a reported $50 billion a year. Whatever the demerits, chocolate gives great pleasure to a great many on a daily basis. Tom Cooks! on Friday will list a couple of recipes.  I invite you to send me some of your favourites - you'll find the email address at the foot of the page.