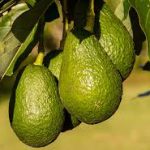 From time to time on the old website, Tom Cooks! would feature one particular ingredient and develop from there. Many of you have commented over the years that you have enjoyed the *history/useless trivia (*delete whichever you fancy) which went with that. For my own part, I thoroughly enjoy the research, in particular the often contradictory information which can be gleaned even from quite reputable sources. So today sees the first of a series, one which should last a minimum of 25 episodes.

Conventionally, I’m beginning with A. Think of any tropical plant and it’s a fair bet that it came from South America or the West Indies and was introduced to Europe by Columbus. Well, in the case of today’s subject, close but no cigar. There is no doubt that the avocado originated from Mexico, which is still the world’s largest producer. The name comes from the Nahuatl/Aztec word āhuacatl. Bear in mind that the hu sound would be pronounced as the ch in the Scottish loch, and hold that thought. The word means testicle. This could lead to wild speculation about the manhood of those Aztecs millennia before Christ; however, early examples were probably small and round, unlike the pear shaped ones we know today. 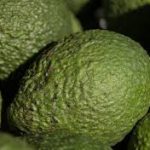 They did indeed come to Europe via Spain, but not until 1601, about 100 years after Columbus. The 19th century saw the start of their cultivation in California. The most common type is the Hass. Representing about 80% of the world’s production, the Hass avocado was produced in California about 100 years ago by one Rudolph Hass. (In La Habra Heights, LA County, in case you’re interested.) Given its shape, it’s hardly surprising that in Britain and elsewhere the fruit was once referred to as an avocado pear. I discovered that in some parts it was also known as an alligator pear, probably because of the dark wrinkly skin of the Hass variety.

The Spanish use the name aguacate, a reasonable enough approximation to the Mexican original. We Brits have never been great at languages. We called it the avogato, which sounds a bit like advocate and that spread: Thus the French and German words for avocado and lawyer are exactly the same. And if any of you are thinking up very funny jokes about lawyers and balls, it’s not big and it’s not clever – and I thought of it first.

They came to our shores in the 1960s, that much derided food era. I maintain that the 60s were not at all bad in culinary terms. The problem was that we took too long to evolve out of the decade, meaning that one time classics became clichés. Get a ripe avocado, some crab meat, good prawns and a wedge of lemon, and you have a very fine dish. And I will happily eat one with nothing more than a simple vinaigrette. They are used a lot in Californian versions of sushi, much to the horror of Japanese purists. And avocado on toast has become a favourite breakfast of many non meat eaters. (Rather good it is too, with a squeeze of lime juice and some salt.) Just one word of caution for the eco warriors: according to the Water Footprint Network, it takes an average of 70 litres applied fresh ground or surface water, (ie not including rainfall or natural moisture in the soil), to grow one avocado. 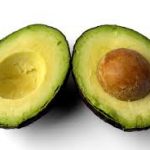 In my house there is a strong possibility that the fruit will be converted into the dish which the Aztecs knew as ahuaccamolli, avocado sauce, or as we would know it these days-

I first encountered this when staying with friends in California in the 1970s. The dish is simplicity itself. I was delighted to read that additions such as tomatoes, sour cream and basil are arrivistes. For heat you would traditionally use jalapeňo peppers. I find it easier to use Tabasco or a similar hot sauce. One final point. Each year A & E departments treat large numbers of people who have injured themselves removing the stones from avocadoes. Cut your fruit in half. Take a large heavy knife and bring it down on the stone with sufficient force that the knife is lightly embedded. Twist 90 degrees and lift. The stone will come out with no loss of flesh (either the avocado’s or yours.)

Ingredients (all quantities are to suit yourself)

Rub the cut sides of the garlic around a bowl, then discard. Scoop the avocado into the bowl. With a fork, mash until smooth. Season with salt, lime juice and Tabasco to your taste. Serve as a nibble with taco chips/Doritos. Excellent as a topping for chilli or tacos with sour cream.

The subject of the next A – Z blog has been chosen. For a chance to win points, can you guess what it is? Clue – it begins with a B.