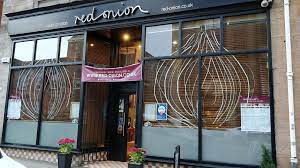 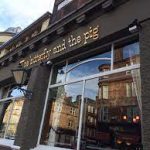 It's a whimsical place. Trying to find a suitable spot for Mr C and me to enjoy our aperitifs, I felt like Goldilocks. A red Chesterfield at the window? Impossible to sit there without barking your shins on the table - too hard. Its neighbour was so big it proved impossible to sit in at above a horizontal level - too soft. Third attempt. A green three piece suite (Chesterfield again) - just right.

I had been told this was a pub. In fact it is also a restaurant and tearoom. The dining spaces are set out in the style of a 1930s boarding house, complemented by the wide range of eccentric artefacts. The toilets have specially made tiles featuring, in relief work, a pig and a butterfly. The Tea Room boasts a kitchen better than The Great British Bakeoff. Ambitious, but not my sort of thing. I did. however, check out the food menu. The daft quirkiness continues.

Butterfly and piglet burger - comes with kitchen made space mayonnaise, earthling ketchup and chips and or make it a cheeky cheese please burger with Mature cheddar, blue or brie

Hmm. What makes this totally OTT for me is the way they list prices. The cost of the latter dish is 14 feathers 50 beaks. A mushroom burger will set you back 13 gardens 50 allotments. Never mind, the people were friendly and I may well return here some day to eat.

Hang on, Tom, I hear you say. We're paying to read lots about The Red Onion.

Well, wrong on two counts. Firstly, if you're paying, you've been scammed. Secondly, I can't think of much to say.

It's a pleasant space; the staff are charming; it is almost completely occupied by ladies lunching. What else?

The fixed price menu is good value, with two courses for under 20 quid. A dish of steak frites attracts a supplement of only three pounds - but if you wanted chips with any other main course, that would be an extra fiver. There's a fair overlap between the fixed price and a la carte menus, so we stuck with the former. Chicken liver parfait was billed with oatcakes and onion marmalade. It arrived with a large pile of rocket. Two problems. Mr C hates rocket and, much more seriously, it was completely devoid of dressing. A bang bang chicken salad was pleasant enough, though the kitchen fell into the usual trap of Brits trying to do eastern food. Chicken with a satay sauce on some veg. Fine, but lacking in oomph,, and the crispy noodles on top had stopped being crispy a day or two before.

The meat part of the steak frites was OK. The skinny fries - almost certainly frozen - were flaccid, and we both struggled to work out what the sauce was supposed to be. A pepper sauce tasting mostly of salt? Unusual and unpleasant. A smoked haddock fishcake was large and quite tasty, peas and lemon velouté adding some lubrication. Sadly, the advertised mixed leaves turned out to be rocket, though this was quickly remedied.

We probably have only ourselves to blame for proceeding to the dessert section. Smoked Arran cheddar was not a great example of the island cheesemaker's craft, but not as bad as a seasonal fruit crumble. You've heard of the fish that never swam, the bell that never rang etc (Glasgow's coat of arms). Well this was the crumble that had never crumbled. A bland peely wally affair served on a puddle of indifferent custard.

At the door we made our farewells and went our separate ways. I was going to Buchanan Street to catch a bus. Downhill all the way. There's a metaphor in there somewhere.