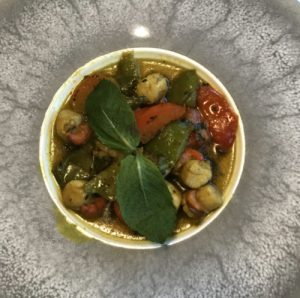 In Rajahstan, Rajputs are people of high caste, second only behind Brahmins. We know this because during our first visit to India, for the first few days, our guide was tall and quite distinguished looking, as he pointed out to us. Watch, he said, people will bow to me. (They didn't.) They will admire my bearing and my nice white skin. (It wasn't.) He had a habit of wanting to move on just when we had seen a particularly interesting part of a palace or whatever. We took to ignoring him. To be fair he was a right royal something or other. But, in summary, he would have us believe that to be a Rajput was special. 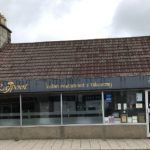 While a study of Indian history may not agree with our proud friend, there is no doubt that today's restaurant is very special indeed. As you can see, it's nothing to look at, just a converted cottage on the High Street. Our eye was caught by a slew of award certificates, not least Best Indian Restaurant in Aberdeenshire. And also by a menu with a variety of twists. Take the starter section, for example. As many pakoras and tikkas and papadams as you can shake a stick at, of course, but things you don't expect. Padina scallops? I have never seen scallops served in an Indian place before. Or Harinjury Fry, which is stir fried venison. Chatting to the boss man, he told us they were proud to incorporate the best of local ingredients into Indian cuisine. We started with the said scallops and tandoori grilled prawns. Some queenie scallops with soft peppers and mushroom chunks, enhanced not overwhelmed by the saucing. They were also presented far more elegantly than one is used to. The more familiar sounding prawn starter was also a revelation. Instead of the large frozen crustacea with the consistency and taste of a squash ball, these prawns had the flavour of the sea, their spicing far more subtle than the norm. 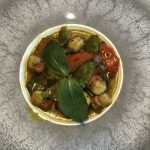 Now it has to be said that we were also feeling relief as well as pleasure. We booked for 7.15 and entered a packed room where everyone else seemed to have booked for 7. It was the best part of an hour before we got any food at all, as we had passed on the papadums. Sorry, guys, a point has to be deducted from the service score, no matter how brilliant everything else was.

Curiosity made me try the venison, which emerged from the stir fry with a quite un-Indian glaze. Very fine, none the less. Now if any of you are starting to mutter disapprovingly about fusion food, stop now. That's what Indian food is. Travel the continent and learn of the influence of the  Mughals, the Persians, the Chinese. And that's before Captain Mourinho of the SS Portugese Trader unloaded the first cargo of chillies, and as a parting gift left a copy of his Granny's favourite cook book, My Top Vindaloo Recipes. The menu features a dish simply called Seafood Cocktail, featuring prawn, scallop and monkfish according to a Portugese sailors' recipe. As well as the usual curry house suspects there are a couple of pages of Signature Dishes, all of which I would like to investigate. There is then a page of Chef's Dishes. I didn't enquire about the difference. 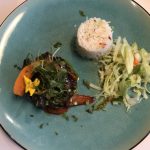 My favourite Indian side dish is sag aloo, combining spinach and potato. In fact, I make a very fine version, but theirs is better. All wonderful so far, but I save the best till last. From the chef's page - no idea who cooked the rest, but he can cook a bit, too - the lamb jalfrezi. I forget who it was who defined heaven as eating foie gras to the sound of trumpets, but substitute the Rajpoot lamb jalfrezi and you get the picture. By half past eight, things were thinning out and the staff had time to chat. Very nice people, justifiably proud of what they serve up.

We were up north for a few days' break. We had been travelling both happily and hopefully, but when we dined at Rajpoot we knew we had arrived.