For quite a long while I was ambivalent about pheasant. Daft though this sounds, it took me a long while to cotton on to the fact that I was horribly overcooking it. There was no family tradition of eating game, never mind cooking it, so I had to reply on recipes, which generally let me down. Even the ever-reliable Claire Macdonald has a recipe in which she advocates casseroling pheasant breasts for 40 – 45 minutes. For the cooking time for this recipe I consulted a new acquisition to my kitchen library, Game, New Ways to Prepare, Cook & Cure by Phil Vickery and Simon Boddy. For its inspiration I have to thank neighbour and friend Lizzie B. Amazing the ideas you can pick up during a quick chat at a party. 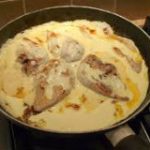 A pheasant breast will feed one normal person. Allow one and a half to two per person to allow for larger appetites. You could halve the breasts, but I wouldn’t. These cooking times will (or should) give you meat which is pink but not bloody. You can use stock or cider, depending on taste. I wouldn’t use pheasant stock, as the taste would be overpowering, and what is the point of veg stock in a dish like this? Chicken, therefore, is my default. You should have enough liquid to cover the pheasant breasts. The amount of cream is up to you. More if you like, but don’t overpower the flavour. You could omit it altogether, but then you’d have to change the name of the recipe. You will want to bubble the sauce for a few minutes at the end, so double cream, as opposed to single, is essential. For cream free houses like mine, Elmlea works equally well.

In a large sauté pan, heat the oil and half the butter. Season the pheasant breasts and brown on each side, then remove. Add the rest of the butter and sweat the shallots and celery until soft. Add the apple and cook for a further minute. Return the pheasant breasts to the pan. Add the Calvados and flambé. This is to burn off the alcohol. Beware of your smoke alarms, eyebrows and kitchen ceiling. Pour in the stock or cider (enough to cover the pheasant) and bubble for 5 minutes, turning the breasts once. When the pheasant is cooked, remove and cover with foil to keep warm. Boil the sauce rapidly to reduce by about half, then add the cream and boil for a further couple of minutes. Season to taste. Return the pheasant breasts to the pan for no more than a minute to ensure they are warmed through before serving.