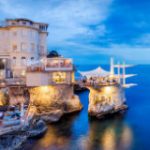 (Not weekends or public holidays)

Back at the start of recorded history, when we were still working and my wife was constrained by academic holidays, we would in October go to Nice or surrounding area for a bit of sun, some good food and a little French time. That small corner of the Mediterranean enjoys a microclimate that hangs on to the summer warmth longer than points further west. Except, that is, the year that it rained apocalyptically without pause, and torrents poured down from the Alpes Maritimes. Manhole covers shot out of their sockets, cars were swept sideways down flooded streets and those who had given in to that last post prandial pastis crossed their legs and prayed for a pissoir.

This year we set off to renew acquaintance with our old friend to find that much had changed - for example, a new tram service provided a welcome escape from the piratical predations of the Nice taxi drivers. But much was just as we remembered it; the narrow streets of the old town, the flower market with its mixture of bargain produce and tourist tat and the inner harbour basking in sunshine. But everything is now owned by Russians. Being a little out of the town we took to t’internet to find some nearby restaurants. In the direction of the city centre there were several likely prospects in Boulevard Stalingrad (continuing the Russian theme) but right in front of our apartment was the spectacular Le Plongeoir. This is a restaurant located on a rock connected to the mainland by a walkway. Its origins stem from the end of the 19th century when a fishing boat was secured onto the rock. During la Belle Epoque the residents of Nice could eat and take tea perched above the Mediterranean. The more able could “plonge” from the diving boards. In 1941, the architect René Livieri designed the amazingly located edifice that you see today. Even in October there were swimmers in the shelter of the cove. Alas here, the initial gasp of wonder at the sheer outrageousness of the location is not followed by a culinary experience at the same level.

Repeat business is probably not one of their main revenue streams, resulting in food that is no more than passable. It is essential to book. This is a challenge in itself. To secure an outside table you should ideally be related to the owners, speak colloquial French fluently, or give the impression that you are related by marriage to a Saudi prince. Good luck. Despite our passable French (vocabulary courtesy of 1960s Beath High School, accent courtesy of ‘Allo ‘Allo) I overheard a waitress immediately classify us as “les rosbifs”. I was tempted to correct this to “les haggis” but by that time we were being processed in the machine and at our table. Starters were half cooked tuna with spices, creamed avocado and herb dressing and a plate of grilled octopus. Both were reasonable if unremarkable. The only other choice was quinoa with basil caviar and crispy egg. Our mains of (very) creamy prawn risotto and sea bream fillet with chickpea panisse (veggie chips) raised the bar. A beef filet was also available. We did not have dessert. The menu does not appear to change often and we got the feeling that the entire operation had been carried out by all of the performers, from the kitchen to the waiters, so many times that we, the diners, had become faceless extras in an interminably repeated process. Indeed, they boast that “all our dishes contain allergens” so don’t bother letting them know that you can’t take dairy or that peanut oil will kill you. They probably just slide the bodies off one of the diving boards. As the restaurant is technically “outside” there may still be the problem of an adjacent smoker, although thankfully that appears to be a diminishing factor. However, the sunsets merging into moonlight (other heavenly bodies may be available) can be a wonderful accompaniment to a dinner. If you have enjoyed a cocktail or two and are well down your bottle of Pinot, it is hard to sit out over the shining Mediterranean and not be suffused with a feeling of smug self satisfaction at your good fortune. The arrival of l’addition will soon sort that out. By coastal south of France standards it is not unduly expensive but if you were served an identical meal in a windowless room you would be outraged. From there you have to get home. If you have a car in Nice you deserve all you get, so the bus it is. These small buses (12 seats with standing room for another 100, it seemed) criss cross the city as though practising for the Monaco Grand Prix. There is a local pecking order on degrees of infirmity known only to the locals. You may offer your seat but instead what may be taken is offence. So, if you are in the south of France and you fancy “an experience” then slip on your all-in-one bathing suit under your tuxedo and take yourself to Le Plongeoir. Courage, mes braves. As my wife says, “it’s only money”.

Donnie Marshall will be better known to readers as the Former Media Mogul. He is, naturally, a world traveller, bon viveur, gourmet and wit. He is available for liquid lunches, long dinners and bar mitzvahs.