Last week I gave you a couple of Chinese dishes which I reckoned you could do just as quickly and just as well at home. Indian* food is a different beast. As any of you who have tried it will know, many good curries benefit from a long slow cook. Indeed, I have seen lots of recipes which stipulate that your onions should be cooked for twenty minutes or more before you move on to the next stage. So you're not going to beat the delivery driver on speed here.

In case you were wondering, a traditional Indian takeaway restaurant will have two or three base sauces which can be adapted for any of the dishes on their long list. For more tips read The Curry Guy by Dan Toombs. (The link is to his You Tube page.) But for today, I want to stick with my theme of something that will taste better if you do it yourself. So we'll start with starters. Any fried food tastes better if eaten immediately it leaves the pan. Pakoras and bhajis can be very good things; however, even if you have them in a sit-in restaurant, the chances are that they will have been cooked at the beginning of service and kept warm for quite a while before they reach you.

Five minutes into this article, it occurred to me that I didn't know the difference between the two. Having done a bit of research, I am even less sure now. Some argue that they are the same, different  terms being used in different parts of the country, pakora in the north, bhaji in the south. Madhur Jaffrey, a native of Delhi, makes no mention of bhaji, but has a lot of pakora recipes. Some would say that bhaji is a more generic term and that a pakora is a type of bhaji. For once, I take no view on the matter. 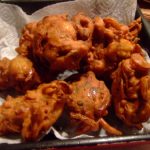 The usual tips and caveats about deep frying apply. Make sure your oil is hot - about 170˚C. Don't over crowd your pan, and do recheck the temperature between batches. And, of course, be very careful. I don't have a deep fat fryer (neither do folk in India). A wok works very well, but don't overfill with oil. You will need gram flour, made from chickpeas. You will get this in Asian stores, and in most supermarkets. Look under the World Foods section, rather than in the Flour aisle.

Peel the onions, cut in half lengthways, then cut each half into thin half moons. Soak the onions in water while you make the batter. Mix the flour, chilli, salt and spices in a bowl with the baking powder, and mix well. Gradually stir in the water till you have a thick batter. You may need to adjust the amount of liquid. Drain the onion slices and pat dry, then mix into the batter. Heat your oil to the desired temperature. If you don't have a thermometer, drop in a little batter. It should rise to the surface and start to brown immediately.

Use two spoons for the next part. Take one spoonful of the bhaji mixture and use the second spoon to push it into the oil. Top Tip: imagine your pan as a clock face. Put the first one in at 12 o'clock and work clockwise. Turn them once. Cook until golden brown all over, This will take 3 - 4 minutes. Remove with a slotted spoon and drain on kitchen paper, Serve with a slice of lemon and/or any sauces or dips you fancy. 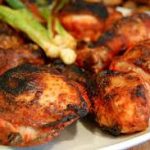 OK, OK, so there's no way you can make an authentic version of this at home. Why not? Because you don't have a tandoor, a traditional clay oven shaped like a giant amphora. Traditionally it's buried and heated to the temperature of a moon rocket taking off. Tandoori meats are cooked on skewer in the centre; naan breads are stuck to the insides. Manoeuvering anything into or out of a tandoor involves risk to life and limb.

The alternatives? Grilling is the logical one, and does impart the traditional charring. But to be done properly, you really do need a grill whose height you can adjust. That's the only way to ensure the chicken is cooked through. These days it is acceptable, not to say desirable, to serve meat, even pork, on the rare side. That does NOT apply to chicken - as much a risk to life as your tandoor. That's why I'm recommending using a domestic oven for this. Less spectacular, but less risk of death.

Tandoori food emanates from the former north west frontier of India, the area which is now Pakistan. The partition brought waves of refugees into the capital Delhi. One enterprising family set up a restaurant called Moti Mahal (Pearl Palace), installed a tandoor, and soon had a roaring trade selling food from their area. The restaurant still exists. Gordon Ramsay visited it, cooked there, and extolled its virtues. It is now part of a large chain: recent reviews seem to reflect that. You will have noticed that your tandoori food is usually bright red. While Kashmiri chilli may have been responsible once upon a time, these days it is generally due to food colouring. My recipe has none. It's important to have the chicken on the bone, to keep it succulent. For me, chicken breasts don't work. The Hairy Bikers suggest using spatchcock chicken. I've never tried that, but I guess it would work well. For tips on how to spatchcock see a Tom Cooks! column from March.

Ingredients (serves 6 as a starter)

To make the marinade, form a paste by blitzing the onion, ginger and garlic. Stir in the yoghurt and spices and mix well. Make two or three slashes in each piece of chicken, then add to the marinade in a large bowl, rubbing in well. Cover the bowl and leave to marinade in the fridge for at least four hours. Overnight is ideal. Stir the ingredients once or twice during that period. Remove from the fridge an hour or so before cooking.

Pre heat the oven to 220˚C/Mark 7. Spread the chicken on a tray in a single layer, reserving any excess marinade. Cooking times vary. After 8 minutes, brush on the remaining marinade. They will probably need about 15 minutes. I would recommend checking them after 12. If you have a food thermometer (something which I find myself using a lot more these days), the internal temperature should be at least 75˚C. (Make sure the probe isn't touching bone.) Which failing, slice one open and make sure it's not still pink. Serve with salad, lemon wedges and a dip of choice.

* I use the word Indian referring to food from all parts of the sub continent.