The ever readable Tony Turnbull is Food Editor of The Times. Unlike his idiosyncratic food critic Mr Coren (whose job I secretly envy) he is always worth the reading, informative and entertaining at the same time. He also appears to be no mean cook. It was therefore with some surprise that I read that he really wan't great at making either pasta or bread. In our house, virtually all of the bread which we consume is home made. It's not difficult - once you know how and have done it a few times. But it did take me 60 years before I ventured there. 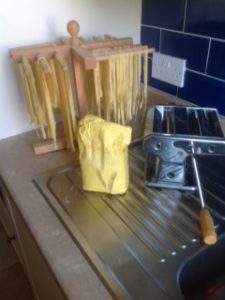 Pasta is similar, except I would suggest that, subject to one proviso, it is even simpler. We will all have seen TV programmes in which an Italian nonna effortlessly rolls out a piece of pasta the size of a bed sheet and so thin you could read the Corriere della Sera through it. But remember she started doing this age 3, and she's now the wrong side of 80. Hand rolling is not for the apprentice. Don't even think of starting off unless you have a pasta machine. Prices on Amazon start around £23, but it's worth paying a bit more for something sturdy. Forty quid will get you some decent quality kit which will let you make sheets of pasta for lasagne or ravioli, or will let you do your own tagliatelle or spaghetti without having to do the fiddly cutting yourself. Maybe you have such a machine already, tucked away unused in the recesses of a cupboard? That's where mine lay for a few years till I took the plunge, and discovered how much fun it is - and certainly easier than making short crust pastry, which is more or less the same thing. The word pasta  just means dough.

You have just two basic ingredients, flour and eggs. (In southern Italy, they use flour and water. These days cucina povera is regarded as something good: but the abject poverty which necessitated it couldn't have been any fun at all.) So why do people think it's a big deal? Well, blame the tradition. By ancient custom and practice, you put your flour on a wooden board, form a well in the centre and break your eggs into it. It's more than likely that on your first try your well will leak and your kitchen feature an approximation of Vesuvius in AD 79, with yolk erupting everywhere. By all means do it by hand; however, you wouldn't make bread in such a daft manner. Use a bowl to hold the ingredients - it's so much easier. Using the tips of your fingers, cover the eggs with flour from the sides, break the yolks then gradually incorporate together until you have a rough dough. Tip out on to a board or work surface. Wood is recommended but my kitchen top does it no harm.

A quick word about the ingredients. Very simply you need 1 egg for every 100g of flour, plus a pinch of salt. You do require the correct flour, sold in this country as 00. (Actually, Angela Hartnett says you don't, but I've never put that to the test.) It's made with durum wheat, so called hard flour which the Italians call grano duro. Use large eggs, the fresher the better. The eggs should be at room temperature. I have no idea why some people store them in the fridge. If you are one of them, take the eggs out at least an hour in advance.

Knead as you would for bread. If your dough is dry, drizzle a LITTLE olive oil on the surface. Assuming you are going to use a machine, five minutes' kneading is enough. (If you're stupid enough to roll by hand, you'll need about 10 minutes.) Your dough should be a similar consistency to plasticine. Wrap in cling film and refrigerate for at least 30 minutes. Your dough will keep happily for two or three days.

Now the fun begins. Lightly dust the surface with flour. Firmly anchor your pasta maker to a work surface making sure you have plenty of space.  The average kitchen unit won't be deep enough, but if you open a cupboard door that will give you the room you need. Make sure it's securely fitted as there is quite a bit of leverage in the first few turns. Assuming you are using the quantities in the recipe below, cut the dough into three, and flatten it out slightly, either with your hand or a rolling pin. This is just to ensure you can fit it in to the rollers. On the side you will see a knob to adjust the width of the rollers. Start at the widest setting, i.e. the largest number. Put the dough in at the top and crank. This is the fiddliest bit. The dough needs to be narrow enough to get started. Sprinkling a little flour on the rollers can also help to get a grip. After your first turn it will look a mess. Don't worry. Fold it three ways and roll again. Do it two or three times at the widest setting then reduce the width each time, one setting at a time. If any bits of dough get stuck in the rollers remove them before the next stage. Adding a little flour from time to time will also help, but if you use too much your dough may become too dry.

By the time you get to setting 3. you will have something that looks like a conveyor belt. It's probably easier at that stage to cut it in half, and do the two halves separately. (if you do this, when you start on the second half, remember to reset the roller wheel to where you left off.) For ravioli you would go down to the lowest setting, and should be able to see your hand through the sheet: for today's tagliatelle, stop at the second bottom setting.

Converting your dough to tagliatelle, pappardelle or whatever is quite easy. It's just a question of cutting into strips. Don't make the mistake of fearing, as I did that it would be impossible to keep a straight line all the way down the strips. Simply cut the strips into the length you want your pasta to be, roll up the sheet, cut into the desired width and unroll again. Or use the tagliatelle cutter on your machine. Cut the pasta sheets to the required length and pass through the cutter, exactly as you did when making the pasta itself. Top tip, take hold of the tagliatelle before you cut right through. That'll make your life much easier 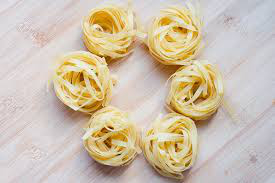 Leave the pasta to dry for an hour or so before cooking. You can get a little "pasta tree" as per the picture. If you don't have that, place a (clean) broom handle between two chairs and use that. Alternatively, curl them up into little nests and place them on a dish towel with plenty of flour (otherwise they'll stick together). If you've made more than you need it will store easily when dry without the need for extra flour. Be aware that they become quite brittle quite quickly.

There now, that wasn't so hard.

Just needs some cheese and basil

No, this is NOTHING like the dreaded nasty spag bol so beloved of us Brits, something which people cobble together in half an hour and think they're being authentic because they don't use sauce out of a bottle. For this recipe we'll make a proper ragù, simmered slowly for a minimum of five hours. And in Bologna that is a product of Napoli in the uncouth south. I omitted to tell you, that according to Bolognese bye-laws the width of your tagliatelle should be 1/12,270 of the height of the city's Asinelli Tower. Fret not, If you've got this far on your first effort I salute you.

Allow a minimum of five hours' cooking time for the ragù. Brown the meat then set to one side.  In the same pan, slowly soften  the onion, celery and carrots with the garlic and bacon, Return the meat to the pan, add the wine,  and cook for about 10 minutes. Season with a little s & p. (If you are using stock made from a stockpot or cube, remember that these are quite salty.) Stir in the tomato paste and cook for a minute or two, then add the tomatoes and about 250ml of the stock. The trick is a   l   o   n   g   slow cook. Keep the remaining stock to hand and top up as need be. In some recipes 100 ml of cream is added half an hour before the end. I don’t.

The tagliatelle will require only 2 - 3 minutes. Top tips. Use a large pan with lots of salt in the water. There is no need to add oil to stop the pasta sticking - just make sure the water is kept at a rolling boil.