Fishers in The City 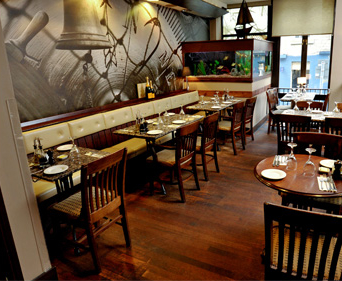 No, familiarity does not breed contempt. At least not in the case of old familiar friends. You're comfortable in their company; you have keenly felt their absence during lockdown.

As I predicted, our first meal out for over four months was here. Crisp spring sunshine over Charlotte Square heightened our anticipation, while the plates on the half mile of outside dining that is west George Street made appetites keener. Down Frederick Street, first right into Thistle Street and we were nearly there. For once we managed to avoid pausing to gawp in the windows of Joe Bonnar's emporium of delights. Getting old we may be, but for once focus did not desert. We were interested in one thing, and one thing only. (Yes, this was written just as Line of Duty was coming to a climax.)

Nice to see you back, said the ever affable Archie. As you will have gathered, we come here regularly, and have been doing so for years. For how many I remember not. The Millar family opened this place in a converted warehouse in 2001. It was the younger sister to Fishers Leith, down on The Shore. They also have the bar and restaurant next door to that, sensibly if unimaginatively named The Shore Bar and Restaurant. (Don't knock it. That marketing approach works for Ronseal - Does What It Says On The Tin.) Because when you come to Fishers you know what you're going to get.

If you don't like fish, I wouldn't bother. Yes, you could have a steak - there is usually one dish for the must-have-meat diner, but why would you, with so much pescatorial goodness on offer? Not only do L & I know broadly what we're going to get, for years we knew precisely  what we were going to order. There is always a fish curry of some description. The origins may be from Goa, Kerala or Thailand: it is always authentic and always great. I seldom, if ever, go past the fish and chips. While it may sound unimaginative, it's quite a good dish for a reviewer to sample, as it can tell you a lot about the establishment in question. Is the fish fresh or frozen? How is the quality? Are the chips home made or bought in? Is the cooking oil changed regularly? And does the chef know or remember the fundamentals of deep frying, ie ensuring the fat is at the correct temperature? Oh yes, and the tartare sauce. More culinary sins are committed in the name of that sauce than almost any other. It goes without saying that the FITC version is really good.

We come here to relax and be looked after, served in an informal (no table cloths or side plates) atmosphere. The staff are cheerful, prepared to engage but never intrusive. There have been various front of house folk (maitre d' would be too stuffy a term) over the years. Archie is undoubtedly the best. When he left for a short while a year or two back, he was missed. But the most relaxing thing of all (for L even more than for me) is to be able to eat without concentrating, as no review is required.

I decided to write this one up again, partly because I had such a small readership in the early days, and partly to shout good things about a place of such loveliness. Out of curiosity I thought I'd see what I said about it before, and how I scored it. You remember that at the outset I talked about focus, about sharpness and how I definitely wasn't losing it. Well, it transpired that the imagined past blog was the Emperor's New Review. Had I deleted it? I double checked by going through all of my annual review blogs. Nothing; nada; niente; sod all. Oh dear.

On our first visit back the menu had been trimmed a bit since reopening, but most of the old favourites were there. Fish soup, fishcakes and, of course, fish and chips. I can recommend them all. Initially the gargantuan shellfish platter and the deluxe (half fish, half prawn) fish and chips weren't on offer, but both have been restored. If your quest is for luxury, fear not. There are scallops and lobsters a-plenty, many costing less than competitors are charging. The keen, ungreedy pricing is yet another virtue. Giving the full price range as I do can be misleading in a seafood restaurant. If you avoid any dishes with lobster, the dearest main is £27. That's for ribeye, veg and chips. The average main course is under £20, and they all come with sides.

As with a good friend, some things stay the same. That's not always a good trait in an eating place. Worry not, the menu is always different, but the classics will be there if that's what you've come for. For various reasons we decided to change our eating ways. A whitebait starter came with a mint green wild garlic mayo, nicely balanced and not overpowering as this can so often be. Halibut was served on a bed of peas, asparagus and pea puree, with a few (lightly) pickled clams, as far removed as possible from the whelks in industrial vinegar which are an embarrassment to the British seaside. Hake was served on tenderstem broccoli with new potatoes and a few spoonfuls of classic mussel sauce. Both plates had a few unannounced strands of samphire for a little salty crunch. If I'm being critical, I don't think either piece of fish had been seasoned before hitting the pan, and my whitebait could have done with just a little extra crispiness. We are, however, talking tiny degrees.

If you're anywhere near the centre of Edinburgh and fancy top quality fish at great value prices in a laid back place run by friendly people, get yourself along here. If I didn't have reviews to write for you good people, I would happily eat at Fishers every week.