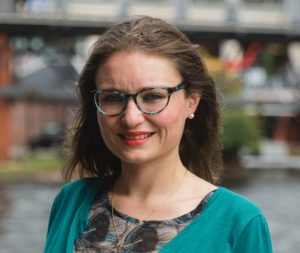 £25 with Hot Beverage or £30.00 with a Glass of Sparkling Wine or Craft Gin Cocktail 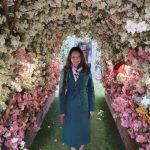 Having opened its doors in summer 2019, Craft swiftly underwent a sizeable rebrand at the start of this year, with the help of Aktar Islam, the man behind Birmingham’s Michelin starred Indian restaurant Opheem. Borrowing a lot from Opheem’s aesthetic, what was once a slightly dull looking venue is now vibrant and welcoming, with low lighting, soft furnishings and cherry blossoms both outside and in. The biggest change though, was the erection of Craft English Garden, a gorgeous space on the side of the canal by Birmingham’s bustling Brindley Place. Not only does it feature outdoor tables complete with canopies and heating for the cooler months, it’s also home to four individual dining pods. Similar in design to the capsules of the London Eye, each pod sits up to eight guests and comes with its own heating controls and Alexa speaker for you to select your own music. And - not that Islam and the rest of the team could have foreseen a global pandemic - they’re perfect for dining in these post-Covid times. They’re also great fun. Each with its own name, we dined in Lily, called after the owner’s daughter. It felt deliciously cosy being ensconced in our own little bubble on what was a very dreich afternoon. The garden also helps make the most of the location. The main restaurant sits just inside the International Conference Centre, which isn’t the most ambient space. Craft’s garden entrance however - a tunnel with a canopy of blossoms and faux grass - makes the venue and overall experience feel that little bit special. 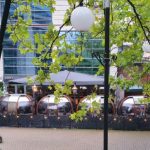 Headed by chef Andrew Sheridan - who starred in the 2019 series of Great British Menu - Craft’s ethos is to celebrate British produce. Everything on both the menu and drinks list is sourced from within the UK, and Sheridan puts a unique twist on classic British dishes. My starter of Cheese and Pineapple Slice comprised a cream cheese mousse piped between layers of beautifully flaky pastry, with a spoonful of refreshing pineapple sorbet on the side. My partner, who is quite the carnivore, opted for beef for both starter and main. His first course of Salted Beef, Pickles and Brioche was a plate of thin layers of cold meat topped with gherkins, capers and pickled onions and served with a very cute muffin shaped brioche on the side. His main - Beef, Yorkshire and Red Wine - was, thank goodness, somewhat uncomplicated. Two fat slices of tender sirloin, perfectly pink in the middle, served with fondant carrot, potato and a single Yorkshire, in a rich, red wine reduction. Glorious in its simplicity, the talent in the kitchen was evident both in this dish, and my own main, Coronation Chicken. A plump, barbecued chicken breast was topped with almonds and red pepper, and served with charred cauliflower and romaine lettuce, in a coronation jus with a few sultanas. A sophisticated take on a classic, and 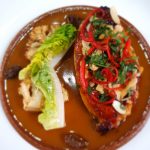 thankfully not a drop of mayonnaise in sight!

In lieu of dessert we opted to share some cheese. Five British cheeses were individually plated and served with a variety of accoutrements, from candied walnuts to fresh honeycomb. The ash-coated English goat’s cheese had an intense flavour and creamy texture, and the cheddar a sharp, nutty bite. Cheese is something this country has always excelled at, and it’s perfectly possible to have an excellent, varied and balanced cheeseboard without looking further afield. I’m not sure if I would say quite the same about wine. English wine’s rapidly becoming a thing, and a lot of it is really very good, but it’s a bold move to only include that on your wine list. The glass of sparkling wine I had to kick off proceedings was delicious - biscuity and dry with a nice amount of body. Our Cornish red on the other hand - a blend of pinot noir, regent and rondo grapes - was a bit thin and uncomplex, and I’m pretty sure the £35 we paid for it could have bought something far superior from a more established wine-making nation. Still, it’s nice to support an emerging industry, and know that what you’re consuming hasn’t travelled miles to get there.

It’s sad that even though the new and improved Craft will be approaching its one year anniversary, it’s only been open a fraction of that time, having to close its doors (and its pods!) once again from today for England’s second full lockdown. Fingers crossed this one’s shorter lived than the last, though I’m glad I was able to try this gem of a restaurant while I had the brief chance!