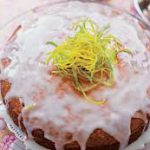 This article started with the intention of describing three or four things lime related; however, when I started writing about the lime cake, it brought back to me the extreme trauma of my early experiences of cake baking. Never made a cake, and think you can just pick up a recipe? Pshaw! That way, madness lies. I have come to the conclusion that it's a female conspiracy to keep us chaps in check, because the recipe writers assume that you understand the basics. Unless your mammy or some kind soul, possibly a home economics teacher, has shown you what to do, it's a minefield. This article should really be entitled Lime Cake For Green (as in inexperienced) Bakers. If you are an expert you can skip large chunks.

I am traumatised by my wife. Not in general, I must hasten to add, but in the field of baking, bread excepted. I have probably baked two cakes for every decade of my adult life. Even at my advanced age, that's not many. While cake doesn't feature much in our house, L can probably point to any three month period when her Ma was alive in which she did more sweet baking than I have ever done in my entire life. I am therefore terrorised when I hear her gentle tread as I labour over a mixing bowl, allied with the sharp intake of breath which translates as, I wouldn't do it that way myself.

The fact is that for the novice, cake making is not that simple. Anyone can do it given a little practice, but those who write or post recipes make a lot of assumptions. Today is for you, the beginner, my comrade. I suggest you read the whole article well before starting. I've added links to some videos to help. If you see an asterisk*, a video link can be found.

A large mixing bowl, which will be the focal point; 2 bowls to contain the separated egg yolks and egg whites - a small one for the yolks and a much larger one for the whites (egg whites take up more space than you think and you will be beating them, which will increase the volume further); a bowl to contain the lime juice; a small bowl or ramekin to hold the lime zest; a juicer; a fine grater; an electric whisk; accurate scales; a sieve for the flour; 2 x 20cm cake tins; greaseproof paper to line them; a wooden spoon for the hard core mixing; a large metal spoon for the folding; a spatula to ensure you get all the mixture out of the mixing bowl; a metal skewer - why? You'll find out later, but make sure you have one.**

After all this work I recommend a cuppa or small drink as a reward for your efforts thus far. I'm sure you wouldn't need much more kit if you were thinking about invading somewhere. But the worst is still to come.

Next, sort out your ingredients. Your butter needs to be soft enough to mix with the sugar. If it's been in the fridge you can soften it in the microwave if you're careful. Don't let it melt or get warm. Next, your flour. I made my first cake when I was 20, for a cake sale being held by a university society. Each layer could have served as a discus. Well how was I to know there was a difference between plain flour and self-raising? Read and learn, boys and girls. Self-raising is what we need here, and you put it through a sieve before it goes into the bowl.

Eggs: bakers recommend medium sized eggs. True perfectionists will weigh theirs. I made a variation on this last week and used large ones. No great harm ensued. But they must be at room temperature. It's generally a bad idea to store your eggs in the fridge, for reasons I don't have time for today.

Grate the lime before juicing, using a very fine grater or microplaner. To get the maximum amount of juice out of a lime, stick it in the microwave at full power for 30 seconds.

Prepare your cake tins (see below), stick the oven on, make sure you have enough room for all your gizmos and you're good to go.

The start of this cake is a simple enough sponge; however, it follows a Claire Macdonald technique which is a little different to the norm. Claire's recipes are always worth following, no matter how unlikely they may seem.

Ingredients (for the cake)

Grease 2 x 20cm cake tins. Add a circle of grease proof paper to cover the base, then grease that as well. It's traditional to use butter - I find it easier to use a thin layer of vegetable oil. Preheat your oven to 180˚C/Mark 4.

Make sure your butter is at room temperature. (If you're careful, you can soften it in the microwave, but don't allow it to melt.) Cream the butter and sugar together. If you're sensible you'll use an electric whisk. The mixture should be smooth and turn paler in colour. From here on, I do most things by hand, but up to you. Add the egg yolks to the mixture one at a time and beat in. (The reason for doing it this way is that if you add all the egg at once, your mixture will split. You can, if you prefer, beat the yolks gently and add the beaten egg a little at a time.)

Sieve the flour into the mixture, and mix it in along with the grated zest, then stir in the juice. Having washed your electric whisk, beat the egg whites till they reach the stiff peaks stage*. You then need to fold the beaten egg white into the mixture.

Fold*: now here's another term that experts bandy about to keep us ignoramuses in our place. It's a technique, ideally using a large metal spoon, for incorporating those beaten egg whites into our mixture. You need to accomplish two things. Firstly, you have to make sure that everything is combined properly, and that here are no tell tale flecks of white which will indicate that you haven't done it correctly. Secondly, you want to use a light movement to try to retain as much air as possible in your final mix. But here's the rub - it's impossible. Impossible that is without the knack, because your mixture is so stiff that it needs a bit of welly.

Here's what you do. Take about quarter of your egg whites and mix them in quite robustly. Then, and only then do you have a mixture which is loose enough to allow you to employ the lightness of touch required for folding with your metal spoon. Click on the link above for a demonstration.

Recipe writers of the world. Why the hell don't you just say, stir in one quarter of the egg white, then fold in the rest?

Once your ingredients are well mixed, divide the mixture equally between the cake tins. Use a spatula to get every last drop of mixture out of the bowl, barring the cook's perk of a few bits left  to lick. Even up the surfaces as best you can, but don't obsess about it. What you must obsess about, however, is whether your oven is at the required temperature. Now I did tell you to preheat it, but if, in the mad panic of assembling your extensive amount of gear you forgot, don't spoil things at the (almost) final hurdle. Switch it on and make yourself another cuppa or pour yourself another drink and wait till the oven reaches the appropriate heat.

Put the tins in the oven on the same rack if possible, and prepare yourself for the final bit of devilment in which recipe writers indulge. I have in front of me a book which says, and I quote, bake for 20 - 30 minutes. A 50% tolerance to determine whether you've made a masterpiece or a burnt offering? FFS! The answer is to check it after 20. It should be a light golden brown and be coming away from the edges of the tin. L can tell by touch whether it's done, but as you are a rank beginner that's not much help. This is where your skewer comes in. Stick it into the middle of your cake. If it comes out clean, then you're OK. If it's still sticky, a little more cooking is needed. If you weren't able to have both tins on the same shelf, bear in mind that conventional ovens are hotter at the top, so check both. That's why the fan oven was developed. For no logical reason I never use the fan setting, much to the consternation of my scientist daughter. I think it's just that I have so many cooking temperatures in my head that subtracting ten degrees would cause befuddlement.

Once the euphoria of your success has faded, it will dawn on you that this doesn't look like something ready for eating. You need to decide what you're going to do next. (As an aside, what you have will be perfectly pleasant unadorned, just a little dry.) While cream is often used as a sandwich in the middle it does need to be flavoured, and cream and lime won't go too well. Instead, try

Beat all the ingredients together. Spread on the rougher side of the cake and sandwich together. Instead of butter you could use cream cheese or ricotta. Or a thin layer of lime marmalade.

And for something on the top? 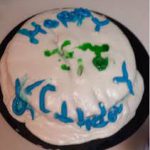 How Not To Ice Your Cake

For a lime cake, a thinner drizzle style icing is nice. Mix 180g icing sugar with the juice of 2 - 3 limes. If the mixture seems a little stiff add a few drops of very hot water, then spread the icing over the top. Don't worry if it slips down the sides - that's why it's called drizzle, and this ain't The Bakeoff.

You did it? Congratulations! You're a baker. Sadly, your kitchen is now in one heck of a mess. Do a trade off. A slice of your wondrous cake in exchange for help with the washing up.

Trust me. The next one will be easier.

** L, the current Mrs Johnston, boasts that she could do this recipe with only two bowls. That woman can be insufferable at times.