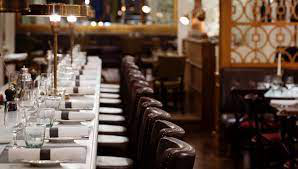 Say Murano and what comes to mind? If you're a traveller, your mind will take you to that rather chi chi (I'm being diplomatic here) island in the Venetian lagoon where they have specialised in glass making for centuries. Not the stuff you see through, you understand, but horrible kitsch stuff in garish colours. (The diplomacy was never going to last long.) 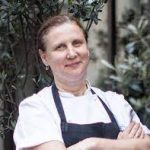 But if you are a foodie, which, I guess, is covering most of you, you're probably thinking Angela Hartnett, another in the long line of famous chefs who graduated from the School of Gordon Ramsay. I watch her on the box, and keep an eye on her progress, but until today I would have told you that I had eaten her food but once, and that she was more low key than her former boss and fellow graduates. Wrong on many counts. How little I really knew about the lady. If you are a reader of the monthly Chef Watch column, you will have by now noticed a trend. The vast majority of interviewees left school as soon as they could because they simply weren't academic. Generally they have been in kitchens since they were 15, if not earlier. Well, you know what they say about exceptions.

I knew that Angela had a Welsh dad and an Italian mum, which didn't explain the distinctly London accent. In fact the family moved to the capital when she was seven, and she was much influenced by her Italian grandma. But a year in Italy as an au pair followed, then a degree in history. Quite late in life before she started cooking professionally, in Cambridge then Barbados. And very late, I'm guessing, to go to Ramsay's kitchen, at Aubergine, his first solo venture. Marcus Wareing had a bet that she wouldn't last a fortnight.

Not only did she stay for 14 years, she headed up a lot of Ramsay's new ventures, where I realised I had dined. Amaryllis in Glasgow; Verre in Dubai; The Grill Room at The Connaught in London. Fine meals all. Then in 2008, her first solo venture, the Michelin starred Murano in Mayfair.

Now I'm sure it takes one helluva lot of effort to run and maintain just one restaurant of that standard, but the last decade has just exploded for her work-wise. There are now three Cafe Muranos (perhaps that should be Cafes Murano?), more informal places. Until last year there was Merchant Tavern in Shoreditch. There is Hartnett, Holder & Co; there is Cucina Angelina in Courchevel; oh, and on the wine list in today's venue there is a white and a red both of which bear her name.

We could only secure space at the bar for our lunch. Not usually my favourite, but the stools were very comfy, and there was lots of activity. The energy and bustle, not to say the downright danger, are perhaps a metaphor for Angela's career. All the food emanated from a single door just next to us, carried on trays which were approximately the same size as the opening. The same door in as well as for out. There is a small round window, but some of the (predominantly female) staff were too small to see through it. Many near misses, but no disasters.

In needle nardle noo time, we had some good foccaccia and oil, supplied by suave Neapolitan Michele, and a glass of Angela's special white. Splendid stuff, but it just kept getting better. The menu is primarily Italian. The pasta comes from Pastaficio, another Hartnett joint venture where they make fresh stuff every four hours for the restaurant. I assume they were also responsible for the gnocchi. We've all had indifferent pasta over the years, and I've eaten some dire gnocchi. Here, they achieved a very difficult feat, a plate with lamb ragù and a few olives, which made both of us go wow! The best lamb sauce ever, and, miracle of miracles, gnocchi which seemed almost light. Caponata, like its cousin ratatouille, can also be very dull. Not this one. Full flavour to the aubergine base, not at all greasy, and a zing at the end.

A pasta main for L, this time rigatoni, the ragù being spicy sausage and radicchio. It had more of a fennel base than L cared for, but for me the balance was perfect, the slivers of radicchio adding just a hint of bitterness. Perhaps lazily I had ordered the chicken Schnitzel, but if you've been reading Tom Cooks! recently, you'll know why. It was served very simply, smothered with rocket and Parmesan. Removing the salad from the top I wondered if the chicken would need salt. Then I noticed that it too had had its own tiny sprinkling of the cheese. Clever, simple, perfect.

Puddings were a little more adventurous than you get in the average Italian place. Yes, there is tiramisu and a selection of ice cream, but seasonality was reflected in the English plums served with the panna cotta, and a dish of ricotta, seasonal fruit and pistachio. The plates we saw coming out of the kitchen looked excellent, but in the absence of a second stomach I can tell you no more.

Many famous chefs have opened brasserie style places. To be frank, because of the mad economics of Michelin starred restaurants, these are sometimes needed to subsidise the posh joints. Many of them are disappointments. Not this one, and I suspect the same will apply to its sisters in Covent Garden and Bermondsey. 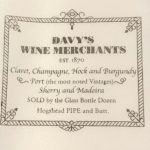 Searching for a spot of lunch we stumbled on this terrific place just off St James. Researching further, I find that this is a wine merchant's business now in its fifth generation. In addition to that, they operate 8 Wine Bars & Dining Rooms, including this one and Champagne Charlie's at The Arches at Charing Cross, plus 11 Wine & Tapas Bars. The latter include Fleet Street's El Vino. The whole portfolio is stuffed with little bits of London which you thought were disappearing.

This vaulted cellar sustained us very well with excellent fish pie, and 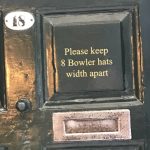 bangers and mash. The whole menu is stuffed with reasonably priced classics and a good selection of wines by the glass. Ignore your pub chains and seek out this wee gem. It's just behind hatters Lock & Co, where they put their unique spin on social distancing.