The story behind this now ubiquitous dish is an excellent one. Unlike many tales of the origins of famous plates, it is almost certainly true. During the Prohibition era in the USA, an enterprising San Diego restaurateur, one Cesare Cardini, opened a restaurant in Tijuana, just across the border in Mexico. It was very popular with Hollywood stars, and also with off duty American airmen. The story goes that in 1924, the day after an exceptionally busy 4th of July celebration, Caesar (as every American knew him) was pretty low on supplies. He had lettuce, eggs, cheese, bread and some citrus fruit. Many decades before Ready, Steady, Cook, he improvised, and served up his now famous salad to a group of airmen for breakfast. Word spread, and it soon became a staple on the menu, originally named Aviator Salad.

The idea of table side theatre in restaurants (think Steak Diane, Crepes Suzette) is now out of fashion, but at Caesar’s it became a big production number, prepared in front of guests, and traditionally eaten as finger food. Wallis Simpson came to Tijuana to have it prepared by Caesar himself. (Even then we were too lazy to get our heads round Italian names.) It is said that the good Mrs Simpson was responsible for its introduction into Europe.

I give you two versions. The first comes from Caesar’s granddaughter Carla. She says that the original recipe used key lime, not lemon, but that the recipe was mistranslated. She also commented that most people use too much garlic. I actually quite like a garlicky hit. As you will see, the original is a version of mayonnaise, the eggs and the oil emulsifying. The second version is a (highly effective) cheat. At my recent Tom Cooks! cookery class, with a student who was an absolute beginner, we knocked up the sauce in two minutes flat, one of these being taken up in grating the cheese and opening the jars of mayo and anchovies.

Romaine lettuce leaves (left whole); croutons (slices of bread either rubbed in oil and baked till golden brown, or fried in a little olive oil); 4 eggs, boiled for one minute then refreshed in cold water; 3 lemons, halved; anchovy paste; about 120ml olive oil; Parmesan cheese, grated (the recipe I have calls for 1½ cups, which would be 150g – I don’t believe it. See the cheat recipe below); Worcester sauce; 5 cloves of garlic; salt and pepper.

Put the leaves in a wooden bowl and season with salt and pepper. Strain the olive oil, and pour a small amount over the leaves. Crack the eggs over the leaves, add lemon juice and roll round to emulsify. You will have to adjust the amount of oil. Add 1 tbsp of Worcester sauce. Add the cheese and toss lightly. Add the croutons and serve.

I have never made this version. With the greatest of respect to Ms Cardini, I am deeply suspicious of this recipe. Instead, I commend my cheat’s version below, which will dress about 20 – 30 leaves. 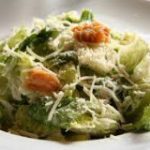 In a mini blender, whoosh the mayo, garlic, anchovy and Parmesan. Dress your leaves. Add the croutons. Simples!