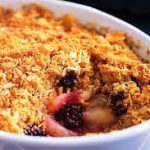 What has gone wrong with the world? While some types of foraging may be a little esoteric - mushrooms, for example, potentially deadly if you don't know what you're doing - nothing could be simpler than bramble picking. Well, apart from the jaggy bits, and the permanent staining. I have recently returned from a holiday in The Wirral. Mile after mile of easy walking along converted railway routes, much of them burgeoning with the season's first ripe brambles (or blackberries as they call them down there) untouched by human hand.

Oh well, all the more for the rest of us, I suppose. An apple crumble is a fine thing at any time but when you liven it up with the vivid colours of the brambles, it tells you that autumn has arrived.

The next vexed question relates to the type of apple. The traditional British cooking apple is the Bramley. Tasty enough, provided you get the sweetness right, but it does go to mush. A good balance is to use a combination of Bramleys with an eating apple such as Cox's Pippin, Braeburn or Jazz. Eating apples hold their shape for a bit. That choice leads on to a second issue, namely the amount of sugar. There are two stages to a crumble, the filling and the topping. Reading some internet recipes, I was appalled by the amount of sugar suggested for the topping. My recipe uses a lot less. I dislike over sweet puds, and would prefer a ball or two of good vanilla icecream to off set the slight tartness of the autumn fruit.

The filling is a different proposition. It will depend on the type of apple you use, and the acidity of the brambles. Supermarket bought ones will be sweeter than those you find in a hedgerow. Taste your mixture and decide for yourself. Were I making this dish with apple alone, I would add about a teaspoon of ground cinnamon. I omit this when using brambles, but some would encourage you to add it. Entirely up to you. You can use any sugar but I prefer muscovado or demerara. It may be imagination, but I think you get a little more character.

A final few words on crumble topping. At its simplest it's just butter, flour and sugar (definitely brown here). For a bit more texture, add some porridge oats or finely chopped walnut pieces or a few sunflower seeds, or a combination of the three.

Mix the apples together. You have to decide whether you want the fruit in layers (my preference) or all mixed together. If the former, put a layer of apples into  your baking dish, then one third of the sugar. Add the brambles and a layer of sugar. Finally, the remaining apples and the last of the sugar. Pack them down well.

To make the topping rub the butter and flour together until the mixture resembles breadcrumbs. Stir in the sugar and any other topping ingredients and mix well.

Spread the topping evenly over the fruit.  Cook for 15 minutes at 190̊ C/Mark 5, then for a further 25 at 180̊C/Mark 4. It's ready when the topping is brown and the fruit is bubbling. Some would suggest you let it cool a little before dishing up. Serve it with anything you fancy. Custard, cream or milk are all possibles. I prefer vanilla ice cream (added when the crumble is still very hot) or crème fraîche.