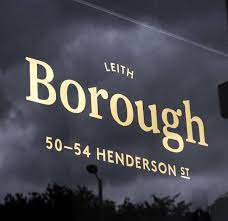 Remarkable things happen in this irregularly shaped, rather plain room. Here I featured for the one and only time in the Guardian food review; I first met the lovely Freda; and I ate (as will you, should you be sensible enough to go) some of the best food currently to be had in Edinburgh.

Well, you may be in need of a little explanation. The room has had a proud history. It once housed the Michelin starred Plumed Horse. Never got there, but I think I was the first to review Norn, getting in just ahead of Marina O'Loughlin, then of the Guardian. Her photographer was in that night. When the review came out, L and I featured in the photo. I'm the one looking glaikit, and Lesley is the one looking bored. (We're still waiting for our royalties.) 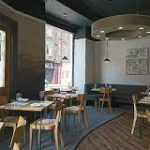 Chef Darren Murray was part of the Norn team, and can therefore share the credit for the rave reviews enjoyed by Scott Smith (now of Fhior) and the rest of the team. 22.5 on the old Tom Eats! site. There was a parting of the ways. After a hiatus it reopened as Borough with Darren and wife Aleksandra in charge, just in time for Covid, I think.

Well, to quote our favourite Friday night entertainment, have I got news for you. It's even better now. I've been a couple of times, once with KL, and most recently with Scotland's Finest Former Journalist (West). Now that's unusual in itself. I seldom return to places I've reviewed. But to have food of this complexity and subtlety for 25 pounds at lunchtime is the Sale of the Century. There is, however, a problem with this quality of cooking, but only for the reviewer. Trying to analyse what you're putting in your gob, even at the time, is tricky. Weeks later, it's nigh on impossible, especially when you can't find your notes from first time round.

So from there I remember a remarkable leek broth enriched with egg. And who wouldn't fall for a dish with beetroot, smoked pigeon, crowdie and walnut? Not this reviewer, that's for sure. Sea trout for the non meat eater, and a pie with celeriac, thyme, mushroom, pork, onion and mustard as the components was even lovelier than it sounded.

There is always one cheese on offer, with a £10 supplement. The choices are eclectic. On one visit it was Baron Bigod, a Brie style cheese from Norfolk. Next time, Wee Comrie, a cows milk cheese with a washed rind, developed just a few years ago by the Strathearn Cheese Company - in Comrie, funnily enough.

I have better notes from the more recent visit with the SFFJ(W). In the interim, I had read a review in The Times. It mentioned a couple of snacks which hadn't been available the first time. (As an aside, astonishingly, they don't charge for the excellent bread, with sunflower seed butter. Made on the premises, I think.)

Cumbrae oysters and lamb croquettes? Yes, please. The former were served with beetroot and harissa mignonette. Mignonette is the poncy French name, (literal meaning, cute little one) for the absurd concotion typically served with oysters. Vinegar and chopped shallots? What's wrong with a squeeze of lemon? So I was suspicious. Tasted on its own Darren's condiment was lovely: with the oyster it was inspired. Trumped, however, by the croquette. A good sized specimen, bearing a worrying resemblance to a fish finger and looking as though it had icing on the top. I couldn't place the precise flavours on either, but if Borough did takeaways, I'd have a large boxful.

I must pace myself. Almost exhausted by the memories and we haven't reached the starters.

Rabbit ravioli - great. But a starter headed BRUSSELS SPROUTS? Come oan! Probably no surprise to learn that it was sensational. Two layers, the chopped sprouts on the bottom with white gloop on top. Neither soup nor purée. It was billed as ajo blanco, a Spanish white almond soup usually served chilled. The other billed ingredients were bonnet, a cheese apparently, and pear. Don't try this at home - come here instead.

I really try not to mention every single thing, but it's hard to know what to skip. Having done a lot with cod recently, I passed on the pie with potato and mussels and curry and cauliflower, and went for the saddleback pork loin. So yes, pork fillet can have flavour, which was enhanced by a terrific sauce and other subtly prepared accompaniments.

Have you got over the shock of the starter yet? Well take your seats for the dessert. Celeriac, apple, almond. They certainly work together in soup. I can now tell you that with just the right hint of added sweetness, they work as a pud too. We were guided through the day and our daft questions were answered by the very lovely Chiara (her dad's a chef from Picinisco, you know) and Michaela (antecedents unknown). Two stunning meals, with service of equal quality.

Ah, you want to know about Freda. Just a few weeks old, chef's daughter. Our eyes locked on our first meeting. A beauty. I have no idea how Darren found the time. I have even less idea how he produced this food. What the late Michael Winner would have called historic.