Less than three weeks to go. Admit it, you're stuck for ideas aren't you? It gets easier if you're buying something for a food lover, but beware. I have cupboards stuffed full of interesting, but unopened packets of rare condiments, and we're still working our way, very slowly, through the five mills of golden salt and pepper from a few years back. Books, on the other hand, are always welcome, and can easily be recycled discreetly via a charity shop. Here are a few ideas for this year.

ONE MORE CROISSANT FOR THE ROAD 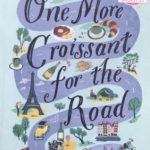 Having recently reviewed the master work that is Red Sauce, Brown Sauce, I had to get my hands on this, its predecessor. The principles of each are the same. Award winning food writer Felicity Cloake plans an epic (2300+ kilometre) journey around France, mostly undertaken on her trusty bike Eddy (named for famous cyclist Eddy Mercx). The strapline for the title comes from her determination to eat and assess croissants throughout the country.

What ends up far more interesting is her determination to get into the soul of regional French food, sampling dishes in their area of origin. And, oh my, how does she sample! The devotion to duty sees her eating the heartiest of fare, be it cassoulet or boeuf bourgignon or choucroute for three consecutive meals, sometimes for both lunch and dinner. Lucky she had the bike to work it off. By the finish she seems to have suffered no great ill effects though she did end up with, in her own words, thighs like Bayonne hams.

Everything, whether articles, cook books or travelogues, written by Felicity is well worth the reading. This is no exception.

13 FOODS THAT SHAPE OUR WORLD 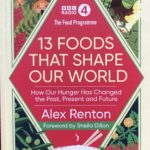 Programme. That's no bad thing, but I would suggest it is rather more than that. Its subtitle is How our hunger has changed the past, present and future. There are thirteen chapters, each one dedicated to an individual food stuff,  researched and written by respected Scottish journalist Alex Renton. Wide ranging, though I found the omission of maize and cornmeal a little odd.

If we pause to think about it, it's only in the last generation or so that food has become such a central part of the media, too much so in the eyes of many. As with anything which gains such popularity it can become trivialised. Interesting, therefore to read the thoughtful foreword by Sheila Dillon, the programme's regular presenter. She writes, for a long time, food has been seen as domestic and female, therefore trivial and ignorable. The highest vote that food has had in Britain is cheapness at the till. The idea of it as a civilising pleasure, the key to health and crucial for the way it connects us to nature, has never taken hold.

The detail is phenomenal, but Alex Renton wears his expertise lightly, writing in a style which is spare, elegant and immensely enjoyable. References include many names familiar to regular readers of this column such as Samin Nosrat, Andrew Whitley and Felicity Cloake. You will find history and economics, but there is much to delight lovers of trivia such as my goodself. I knew that ice cream was once known as hokey pokey, but had no idea why. It comes from the sales cry of Italian street vendors, gelato, ecco un poco!

You enjoyed that? There's much, much more. Heartily recommended.

The Swedish Farmer & The Scottish Cook 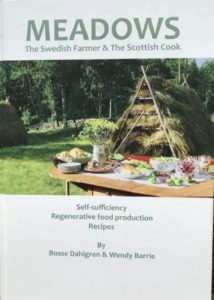 This is not your common or garden food book, but its authors are not common or garden folk. Now in place of common or garden, I nearly wrote traditional, which would have been completely wrong. The subtitle of this book is Self-sufficiency, Regenerative food production and Recipes. When it comes to these three things you don't get much more traditional than Wendy and Swedish husband Bosse.

We met Wendy in this column just a few weeks ago. Ambassador for Slow Food Scotland, she is leader of its Ark of Taste scheme here in Scotland. Bosse was a farmer in Sweden, his fields ploughed using horses, his meadows cut with a scythe. In the foreword he shares a memory from the 1950s of an idyllic summer's day, on a cart in a meadow with his grandfather just after the hay harvest. Bees humming, birds singing. Returning to the same spot fifty years on the place was unrecognisable, taken over by forest, the biodiversity killed off.

A desire to restore our planet to a more natural state, while demonstrating that food production and caring for our environment are not incompatible, is a strong theme running through the book. There are six sections. To give a true flavour, I list them in full.

From two authors with very different backgrounds comes a marvellous unity of purpose and credo. The book may not be for everyone, but it is at once informative and very easy to read. You have the bonus of over 100 recipes from Wendy. Some of you may be thinking this to be a little pricey - see the book for yourself and you'll realise it must be a loss leader for Wendy and Bosse's passionate beliefs. I have never seen so many colour photos in one volume of this length. At least one per page: sometimes as many as five. As sumptuous as it is unique.

To find out how to buy Meadows, click here.