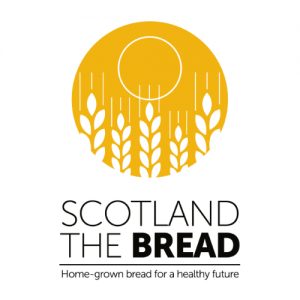 If there are any budding Messiahs out there, I have a word of advice for you. Arrange to meet Andrew Whitley of Scotland The Bread, persuade him of the benefits your cause, then appoint him as your first apostle. In the eighteen months or so since I started this feature it has been my pleasure to encounter a good number of food producers. What they all have in common is their vast enthusiasm. To avoid repetition I have to limit my use of the adjective passionate. In the case of Andrew, evangelical is nearer the mark.

We meet at 10 o'clock at his stall at Bowhouse Market, between Elie and St Monans, where his flour mill is situated. I always prepare a list of possible topics, in case conversation flags. Andrew talked with scarce a hint of deviation, hesitation or repetition for the best part of three hours. L and I were spellbound.

Let's take a step back. Scotland The Bread is the trading name of Bread For Good Community Benefit Society, established in 2016. It might best be summarised as a programme created to support community based food and farming projects. Why? Well let me try to distill a tiny part of what I learned from Andrew, and about which you can read more in his book Bread Matters, winner of the André Simon Best Food Book Award in 2006. If you think you are happy with a diet of supermarket bread, be prepared for your hair to curl.  Wheat contains eight important minerals. The industrial technique of milling white flour removes all of the goodness. Since bread started to be made on a huge commercial scale from about the 1960s, bakers have used all manner of additives. Some of these are now outlawed. Andrew tells me that such a loaf will now contain a cocktail of enzymes. While each one may be certified as safe, he points out that the cocktail as a whole has never been tested.

Andrew started out his professional career as... You have three guesses. You failed. He originally worked as a producer in the Russian service of the BBC, broadcasting to the (then) Soviet Union. Through his work, he discovered and was much influenced by Rachel Carson's Silent Spring, which took a damning look at the adverse environmental effects caused by the indiscriminate use of pesticides, and the complacent attitude of public officials in the face of Big Agriculture. His Russian connection alerted him to one of the world's largest seed banks, just outside St Petersburg, as it now is. It also gave him a love of rye bread. His then hobby of bread making saw him develop a sourdough version.

Fast forward a decade or two, and Andrew has started a bakery in Melmerby near Penrith. The supermarkets come to call and he is persuaded, perhaps against his better judgement, to gear up the business to supply them. Fairly soon, someone else steps in to make an inferior, but cheaper, version. A hard lesson.

Engage Andrew in conversation and politics with a small p is never far away. If you know your European history, you will be aware that many a riot and near revolution has been caused by bread prices. In 1846 in the UK the Corn Laws were repealed, allowing the import of cheap wheat. Cheaper food, argues Andrew, has allowed employers over the centuries to pay artificially low wages. It has also encouraged food producers to cut corners to keep the price of their product as low as possible and to stint on quality.

OK. Cheap food - what's wrong with that? You only have to look at the obesity crisis which grips this country, ironically worst among the most deprived communities. Food banks are a disgrace, declares Andrew. It is a fundamental human right to be able to eat healthily. Better quality bread, where eating less of it will fill you up more, is a central tenet of his beliefs. The quality of the bread starts with the grain and the flour. Grown by the Balcaskie Estate, Scotland The Bread's wheat flour comes from three historic wheats, Rouge d'Ecosse, Golden Drop and Hunters, varieties which haven't been grown commercially in Scotland in living memory. Astonishingly, the seeds for these came from gene banks in several countries, but not from Scotland's own seed archive.

Andrew Whitley and the Zentrofan Mill

And the milling? Are we back to the traditional way? Surprisingly not. The problem with the stone grinding process is that it generates a lot of heat, adversely affecting the natural oils in the wheat germ. STB use a Zentrofan mill, a specially imported machine which conserves all the important minerals. Two types of flour are produced, in relatively modest quantities, one wholemeal, the other rye. You can also buy your own starter pack, a descendant from one which was first born in Russia decades ago.

There is so much more of this story to tell. A vision of a Swedish model, a bakery which mills the flour in the morning and bakes with it in the afternoon; the Good Food Nation Bill; the plans for the Fife Fermenter, an ambitious programme with the Anstruther family to develop more of the buildings at Balcaskie. A future article (or two) perhaps. So let me leave you with some more remarkable stuff I gleaned.

Like any sensible food commentator these days, Andrew is concerned about food miles and their environmental impact. So I am staggered to learn that out of the 900,000 or so tonnes of wheat which Scotland produces annually, less than 500 tonnes is used to make flour. The bulk of it is used to make grain spirit, much of it along the road at Diageo, Leven whence come your Gordon's Gin, Smirnoff Vodka and Pimms. In other words, most of our bread flour is imported.

All great visionaries have more than one idea. Some may think Andrew to be fanciful in his view that watching the waving of traditional taller wheat (modern stuff has been developed to be smaller, the better to withstand Scottish storms) will have a positive impact on mental health. But get him started on farm subsidies. Surely, he argues, we should be encouraging more than simple quantity of production. Why don't we look at nutritional value? Number of people fed per hectare? Community benefit? Environmental impact?

I think this is beginning to happen so far as the latter criterion is concerned. If any of the others seem far fetched, so too, two centuries ago, did the idea that 10 year old children wouldn't be allowed to work in factories, or that one human being couldn't be the property of another. If you want to be borne up on a human tide of enthusiasm, visit the regular markets at Bowhouse, visit the Scotland The Bread website, and get hold of Andrew's books.

And if you don't already do so, start baking your own bread. It is very satisfying. There we have it. Simultaneous food for thought and food for the stomach. I hope it also goes without saying that Scotland The Bread flour makes a fantastic loaf.