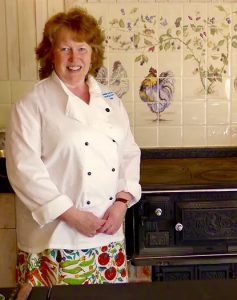 Take your life in your hands and hurtle down the vertiginous slope to Hawkcraig Point in Aberdour. There you will find the home of the force of nature that is Wendy Barrie, chef, food fanatic and ambassador for the Slow Food Movement Scotland.

I've been slightly surprised how few people actually know of the Slow Food Movement (SFM). It was founded in Rome in 1986 by Carlo Petrini as a protest against plans to set up a Macdonalds at the foot of the Spanish Steps. It has grown exponentially, now with branches world wide. The website sets out a vision of a world in which all people can access and enjoy food that is good for them, good for those who grow it and good for the planet. The key principles are that food should be good, clean and fair. There's a link to their website below for more information.

In 1996 the Ark of Taste project was launched. That award is given to small-scale quality products that belong to the cultures, history and traditions of the entire planet. Many are selected because of a risk that they might disappear within a few generations unless action is taken. There is also a Presidium award recognising Slow Food communities that work every day to save native livestock breeds, local fruit and vegetable varieties, bread, cheeses, cured meats, sweets, and more.

Scotland is home to 61 Ark of Taste products, more than half of these being in the islands. A couple of weeks ago I was fortunate enough to attend a tasting session run by Wendy and her amiable husband Bosse. The tasting itself was terrific, but what made it even more fascinating was Wendy's non stop commentary, full of information, trivia and occasionally acid asides. In short, just like columns written by someone I know - except better.

Coffee and Selkirk Bannock to kick things off - except Wendy sources her bannocks from Crieff. The stuff they make in Selkirk is full of marg and e numbers, she sniffs. By coincidence I had been intending to source salt cod to make a Portuguese bacalhau recipe. (See this week's Tom Cooks!) Wendy produces some from Shetland, and cooks it for us later.

Salt is one of the most ancient and important food stuffs in the human diet. Good to learn that there are now at least three Scottish companies manufacturing it. Fascinating, too, to taste their subtle differences. I had no idea there was such a veg as a Musselburgh leek. Colonsay honey? Another new one on me. But greater surprises were to come with the revelations about black pudding.

I've seen the stuff being made in Bali - I horrified my new chums with my tales of lawar. Black pud uses fresh blood. Er, actually, not often these days. The vast majority of the stuff is made using dried blood. With the renowned Stornoway black pudding, virtually all the ingredients are imported into the island. Hats off to John Lawson Butcher & Deli, Uphall, Winchburgh and Broxburn, possibly one of only very few Scottish butchers still using fresh blood (whose origin can therefore be vouched).

Lunch in about 15 minutes, announces Wendy. Whit? Salt cod pie, roast Orkney Boreray mutton with all the trimmings, mostly home grown, plus the best mint sauce you' ll ever taste. Prestonfield Rhubarb Fool. Did you know that rhubarb was introduced to the UK by the then owner of Edinburgh's Prestonfield House in the 17th century and is still grown there? Wendy got a descendant from the original crop just for us.

And finally, to sink the ship, a selection of cheeses. I knew Anster and St Andrews Farmhouse cheeses, but not the Dunlop crowdie. The first time I've ever seen the point of crowdie. Served with Orkney beremeal crackers and juniper butter, another first for me.

What a day. Educational, fun and con tantissimo gusto, as Carlo Petrini might say. Wendy and Bosse hold these events quite regularly. Only one more this year, but vouchers for future events would make brilliant Christmas presents for food loving friends and relatives. As would their new book, Meadows: The Swedish Farmer & The Scottish Cook.  A review to come before Christmas.

The Ark of Taste