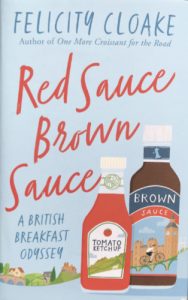 It was Somerset Maugham who said, to eat well in England you should have breakfast three times a day.

That was a century ago. Praise the Lord/Allah/insert as you will, culinary standards have improved out of all recognition, but in Britain breakfast or, perhaps more accurately, the idea of breakfast, remains an important one. This is Felicity Cloake's second travel odyssey. The first, documented in One More Croissant for the Road, saw her cycling from Britanny to the Mediterranean. This was published a couple of years ago, by which time the plans for this bicycle trip were already in place, only to be stymied by The Great Plague. 14 months late, she hit the road.

We Brits have always been good at these grandiose schemes - think David Livingstone, think Mungo Park. Think John McDouall (not a typo) Stuart, who walked across the Australian desert, nearly died, then went back and did it again. Did the word why never occur?

Cloake answers this in the introduction to her wonderful book. Breakfast is now polarised between the fast, on the run version, and the weekend feast. I am, she says, looking forward to getting better acquainted with both in the name of research.

Less tongue in cheek (for this is a lady who appreciates her grub) she points out that breakfast is a badge of identity. She continues (and I paraphrase), we tend to stick with that which we grew up with, whether cornflakes or corn tostadas, To criticise someone's breakfast habits is to attack their culture or, in many cases, their mothers.

Now this is hardly the first work on breakfast in this country. It's a defining part of Britishness. Even the chauvinist French grudgingly say good things about it. So what's the unique selling point of this book? There are actually two.

Firstly, she does the trip by bike. We love a good travel book. In the course of this epic round trip from Falmouth in the south to Carrbridge in the north via Wales and Northern Ireland we meet food producers, we revel in the scenery and the people and, unfortunately, wince with Felicity at the nasty injuries she overcomes.

Secondly, and uniquely in my experience, she ponders on another divisive breakfast issue, namely the accompanying condiment of choice, hence the title. (Although I am astonished to learn that there was a YouGov poll on the topic in 2011.)

There is a third reason that I commend Red Sauce etc so highly. Cloake is a fantastic writer. The day job is as a journalist for The Guardian. I'm not a Grauniad reader, but I've come upon her recipes many times in my researches, They're always well put together with fascinating background information. (A bit like Tom Cooks! but better.) She says that she knows how to use a semi colon and is something of a grammar pedant. I love this lady even more. In my mind I still think of her as a newcomer, but more than a decade has passed since the publication of Completely Perfect: 120 Essential Recipes for Every Cook.

To the book itself. At the outset she apologises slightly. With the Ulster Fry as an important feature, the reference should be to the UK Breakfast. But hey, as she points out, The Great British Breakfast is much more alliterative. We are educated and informed. While I'd heard of the Welsh classic of laverbread, I don't think I knew exactly what it was. I wonder how many could complete Felicity's list of breakfast puddings which one finds in the UK, black, white, red, fruit, duck, hogs (a new one on me) and, of course, our very own haggis.

There are recipes galore; there is food history by the barrelful; and, best of all, there is glorious gourmandising. The cast of characters with their regional and personal quirks and  foibles provides much entertainment. These people are also highly valuable for a survey of the issue alluded to. Is it a spoiler to reveal Felicity's own preference? I think not. She likes her breakfast with English mustard, and her bacon sandwiches with marmalade.

Not all of us are yet travelling as much as we used to. Make amends by joining Felicity on her quite brilliant odyssey.

Finally, a very quick mention for another excellent book which I was gifted by dinner guests, soon to be Aberdonians, D & J. 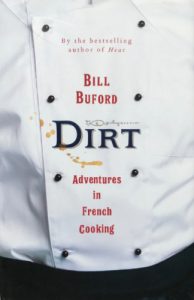 You are a celebrated writer and journalist. You are a decent home cook, but want to see if you can take it to the next level. Somehow you end up spending four years in Italian kitchens and in an Italian butchery, learning along the way how to speak the language and absorbing the food history.

Well that was the subject of Heat, Buford's previous book. His next inspiration was to take his cooking to the ultimate level, French grande cuisine. So you speak no French and have very young children. Pouff! Mere bagatelles. This is the extraordinary story of how Buford settled in Lyon, generally regarded as the capital of French cuisine. He becomes part of Bob's tiny boulangerie making the finest bread in town. He is admitted to study at L'Institut Bocuse (named for the legendary Paul Bocuse, whom he comes to know). He blags his way into a short stage at the Michelin starred La Mère Brazier, and ends up employed as a junior chef. In short, experiences that many a young pro chef would kill for.

Transitioning through the terrors of inexperience, and the bullying culture of a traditional professional kitchen, he emerges with an understanding of what makes chefs at that level tick, one of them being the obsession with their ingredients. That's where the title comes from. Buford is American. We would say earth as opposed to dirt; the French would say terroir. In other words, the things that make the difference between food from small artisanal producers and from Big Food plc.

There is appreciation for the flour which Bob uses; for the cheese from Alpine meadows with six different types of grass; from the very best in Lyon market as pointed out to Buford by Bocuse himself.

Any extraordinary work. Part autobiography, with a bit of history and a great deal of humour, much of it self deprecatory. Thanks again, D & J.