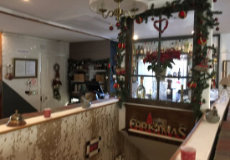 Turbulent though our current times may be, Scotland has seen much worse. Consider, for example, religion in the 17th and 18th centuries. You have the Reformation out of the way – let’s get on with life. All well and good, unless you happen to be a Catholic. Then King Charles steps in, demanding to be head of the kirk, with his platoon of bishops to oversee it all. We’re no' havin' that, so we sign a covenant.  Lord knows how many are killed, then things settle a bit and we try to emerge into a new century. All well and good, unless you happen to be a Catholic or an Episcopalian. Never mind. History is written by the victors, so the Church of Scotland now rules the roost. Ah, but then we get into the schisms. Longer than the space allocated for this whole article to go there.

You may be forgiven for querying the relevance of this ecumenical rambling. The answer is that the building which houses today’s restaurant came as a direct result. One of the oldest structures in Bearsden, it was originally built as a breakaway church in 1786. It has had many occupants over the years, serving latterly as an upmarket bridal boutique. A couple of years ago Andrew Stott and Richard (pronounced Ree-shar – he’s a proud Burgundian) Dupupet moved Le Bistro Beaumartin out of the city centre and set up Beaumartin The Cottage here.

Their website proclaims, The Spirit of Scotland, The Flower of France. Don’t you just love that? Unlike most advertising straplines, it’s not cringeworthy: and, more importantly, it sums up precisely what this place both promises and delivers.

I pondered in advance whether I could write a fair review based on a lunch given for a private party. Had I noticed any of the negative issues which can arise at these events, I would have tucked my notes to one side; however, I’m delighted to shout a triumphant hurrah.

When one has been going to France for nigh on fifty years, in food terms it can be difficult to distinguish between memory and fantasy, between actuality and aspiration. For me, a master of French provincial cookery is one who can take whatever ingredients are to hand and coax out of them a dish which is greater than the sum of the parts. Take a bow, chef Andrew. From Arbroath, he’s the spirit of Scotland part. And also from Arbroath came the hot smoked salmon for one of the starters. An artful salad with avocado, sundried tomato and a mustard dressing to provide a perfect counterpoint to the fish. Chicken liver parfait is ubiquitous, but is rarely as good as this. It came with a pear and red onion chutney, but its earthiness was best offset by some homemade raisin bread. Perfect.

Peelham Farm Minced Lamb Parmentier, topped with Crushed Potatoes is perhaps heading slightly in the direction of Pseud’s Corner; however, I like shepherd’s pie, and this was a very good example. Hake served with couscous and veg could, in the wrong hands, be a very dull dish. No such danger here, the couscous nicely spiced, and a zingy slick of tapenade to liven up the fish.

On to puddings. I didn’t get a crumb of the Speculoos and Ginger Cheesecake, but the sorbets, home made of course, were excellent. You could have had a banana tarte tatin (for some reason not a combination that would ever appeal to me, no matter how well executed). Cheese was well chosen and well cared for.

Front of house, Richard kept order (not always easy in such circumstances), kept the food coming, and kept everyone charmed. The man is a natural. It is rare for all the best features of a French bistro to be successfully transplanted into Scotland. Three cheers for Richard and Andrew, the new auld alliance.