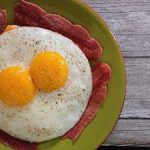 Well, food lovers, is your diary primed? What famous British food day is with us next week? Warning: the answer may not be the obvious one.

And while you're pondering, who can tell me what a collop is? I encountered it years ago in a Scottish hotel where the dinner menu featured a dish entitled Collops of Venison, the collops in question being medallions. From that day forth I had assumed collop to be a Scottish word, possibly a corruption of escalope, given our love of scrambling French words. And rather a lovely word it is. Collops of Beef is another dish which one encounters occasionally

But back to our quiz. Did you, assuming my admonition to be a double bluff, write down Shrove Tuesday? If, dear reader, I tell you there is a minefield ahead, take heed. That is the obvious answer. The fact is that I have done so many articles about pancakes over the years I was going to ignore it altogether, especially as this should be a Chef Watch day, being the last Wednesday in the month and all that. 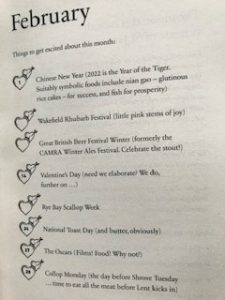 Extract From A Year of the Kitchen Cabinet

But then, courtesy of Annie Gray's wonderful new book of a year of The Kitchen Cabinet, which will be reviewed soon, I learned of today's correct answer. February 28 is Collop Monday. I confess I'd never heard of it before, so give yourself a gold star if you got it right.

The word apparently derives from a Swedish word kollop meaning a piece of meat. While the Oxford English Dictionary does refer to Scotch collops, a dish of sliced veal, forcemeat and other ingredients from 1730, the English seem to have got to it first.

A collop was originally an egg fried on bacon. The dish then became known as collops and eggs, the collop being the slice of bacon. Collop Monday falls the day before Shrove Tuesday. In his Tour of Great Britain in 1726, Daniel Defoe refers to the Monday preceding Fastens Even, called everywhere in the North Collop Monday, from an immemorial Custom there of dining that Day on Eggs and Collops.

In many countries a carnival is held on Shrove Tuesday (Mardi Gras). On the basis that the word derives from carne vale, translating as farewell to meat, the practice of using up your bacon makes sense. I find a newspaper reference from the Nottingham Evening Post a hundred years ago referring to ancestors cutting up their fresh meat for salting or hanging up until Lent was over.

It's really not like me to pass any the excuse for a feast. Yet another day when I learned something new. If you or any ancestors or friends celebrated, or still celebrate, Collop Monday, please let me know.

Chef Watch will appear next Wednesday, featuring Jamie Scott of The Newport Restaurant, Newport-on-Tay, winner of Masterchef: The Professionals in 2014