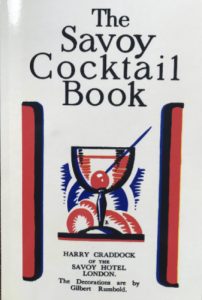 Last week's Tom Cooks! on the subject of the martini cocktail attracted more attention and comment than I anticipated. Some of you also expressed interest in The Savoy Cocktail Book, compiled by Harry Craddock, head bartender at the hotel's American Bar. While the book is long out of print, an enterprising publishing company, Martino Fine Books of Connecticut, has produced a reproduction, including the excellent illustrations by Gilbert Rumbold.

I remember a copy in my parents' house, but I never opened it - nor, I suspect, did they. Ours was not a cocktail house, although when doing the final clear out, a trove of bottles containing liquid of unlikely provenance, and even more unlikely colours was unearthed. It was in the interests of research for you that I acquired my copy. Suffice to say that it makes a brilliant read, even for a teetotaller. While the recipes were collected by Craddock himself, it is not clear who wrote the hilarious preface, foreword and historical notes.

There is sound advice for the Young Mixer. She is told that ice is nearly always an essential for any Cocktail, and is sternly warned, never use the same ice twice. The 168 pages of cocktail recipes begin, Hereinafter learn all that is known about COCKTAILS. For those of you interested in your history, we are given the true, authentic and incontrovertible story of the origin of the cocktail. It involves a story of friction between the southern states of the US, and Mexico. This tale of how the conflict ended and the peace was settled involves an American general, King Axolotl VIII of Mexico and his daughter, Coctel. We are not told when the treaty was sealed, but my money is on April 1. See below for a picture of axolotl. 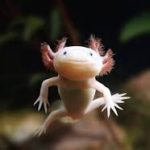 Part II of the book is about wine, the wines dealt with being Bordeaux, Champagne, Burgundy, Hock and Moselle, Port and Sherry. The world was a smaller place in those days. The section is of historical interest, but is preceded by a sumptuously written five page essay by the French writer Colette. She was given her first glass of wine, a muscat of Frontignan, at age 3, and potential anaemia was treated with fine wine between the ages of 11 and 15.  I defy anyone to read it without being tempted to reach for a fine bottle and a corkscrew.

When I refer to 168 pages given over to cocktails, I sell the book short. The next 33 pages contain recipes for, inter alia, sours, toddies, slings, shrubs, sangarees, rickeys, fixes, smashes, punches, cups etc. The book having been published in 1930 there are also a few helpful recipes for Cocktails Suitable for a Prohibition Country. One might be forgiven for being puzzled as to why this is separate from the (very short) list of Non-Alcoholic Cocktails. The reason is given at the start of the chapter. We are told that these are for those countries where they make the best of Prohibition and where the ingredients for making them are obtainable without much difficulty.  In the four recipes given, the ingredients include Scotch whisky, gin, Pernod, brandy and hooch whisky.

Michael Kaplan of Great British Vermouth, who reminded me of the book, warned me against taking all of the recipes too literally. In the Prohibition era, any drink loving American of means visiting London would make his way to Harry Craddock's domain to sample the real McCoy*. Once the drink began to bite, Harry's customers would regale him with memories of cocktails they had drunk (or thought they had drunk) in far flung places. Harry noted them all down - Michael has doubts as to whether he served them all.

Going through the book, one can see why. A Golden Slipper, anyone? That's yellow chartreuse, egg yolk and eau de vie de Danzig. Or Hell Cocktail? Cognac, crème de menthe and a pinch of red pepper. Or, finally The Nose-Dive Cocktail. This, we are told, is very well known among pilots on American Flying Fields. In this context, a hooker is a small glass about 2 inches high. I quote-

Take one hooker of Gin, place in it an olive, then deposit the glass carefully in the bottom of an ordinary tumbler. Fill said tumbler with Water, Ginger Ale or What Have you, until almost to the top of the small glass then down the whole thing quickly. That is, everything but the small glass.

But if you ignore the nonsense there are hours of fun and potential hangovers for cocktail lovers everywhere. Craddock was once asked what was the best way to drink a cocktail. His reply? Quickly, while it's laughing at you.

*This week's quiz. What is the origin of the phrase, the real McCoy? Usual prize. You are on your honour not to have looked it up before writing in.