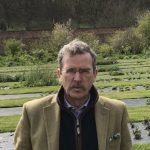 The supermarket most local to me sits just behind Edinburgh's Murrayfield Stadium. Next to it is an industrial plant, well protected with security cameras and razor wire. This is not, as you might assume, due to its proximity to Gorgie and Tynecastle Stadium. The principal reason is that they, quite legally, manufacture morphine.

This comes as surprise to many, but is probably better known than the fact that vermouth is made in South Queensferry. By Michael Kaplan, suave, urbane Bostonian, sometime writer and film maker. Confused? I was too. Michael and his wife are based in a delightful house on the Dalmeny House estate with stunning views over the Forth. The property has been renamed The Compounding House but, to be accurate, it's in a small garage where the magic happens. So many questions.

I meet Michael on a gloriously sunny morning on the estate itself. We begin with a tour of the gardens, the Melon Garden and the vast walled garden. They are both immaculate, but were totally overgrown when the project started. Michael noticed that in the gin boom, distilleries were increasingly highlighting the different botanicals which they used, in particular their source - what the French would call terroir. It occurred to him that in spite of this, many seemed to be perfectly happy to mix it with industrially produced vermouth. He explained to me a lot about the history of the Martini cocktail - originally called Martinez and nothing to do with the vermouth named Martini. There's a whole article in that, for another day.

I had thought the name derived from wermut meaning wormwood. Michael traces it to wermód, an Anglo Saxon word meaning manly courage. The roots of both words are apparently similar. The important point is that while we may think of vermouth and similar drinks as products of France and Italy, there is in fact a native British tradition going back to the Romans introducing wine to Britain. It is reputed that at one time vines were grown on Arthur's Seat (as they now are at Dalmeny.) 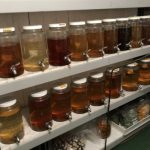 Adding herbs to wine creates an antioxidant which was essential if you were trying to transport the stuff. Modern production stems from 18th century France and Italy, the areas covered by the Kingdom of Savoy. The white wine produced in those areas was unstable and rather unpleasant. Flavouring improved things and, traditionally, sugar is added as a preservative. The best known flavouring is wormwood, or artemisia absinthium to give it its Latin name. Thus was born the notorious absinthe. In the late 19th century this was being made at 50% ABV, rotgut stuff at dirt cheap prices. At the other end of the scale, many other drinks of wine and herbs were being used for medicinal purposes, and tasted accordingly. The requirement for modern day vermouth is that it must be between 15% and 21% ABV, and must contain wormwood. (I nibbled a leaf of the plant. Trust me, a little goes a very long way.)

Great British Vermouth contains 24 botanicals. They are all now grown on the estate, though one of them needs five years' storage before it can be used. Each flavouring agent must be steeped for a period of time (all different) before being blended. Michael makes the whole process sound very simple, and tells me it took him only about three months to perfect the recipe. He is proud of the clean, floral notes of his product, and the fact that there is no added sugar. That does restrict the shelf life (though it will be fine for cooking for quite a long time). He has now introduced quarter bottles so that we occasional cocktail makers can sample it at its best. 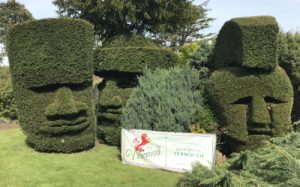 I can't finish up without reference to the Vermouth Gods. A quarter of a century ago, three yew trees were badly damaged in a storm. They were destined to be felled until Michael stepped in. I'm not sure how long the topiary took, but they are now permanent features.

Did you taste the stuff, I hear you ask? What sort of stupid question is that? Of course I did. It's stylish and slightly different, a bit like the man himself.

On The Side will return in two weeks.