Charles Dickens goes into a bar. 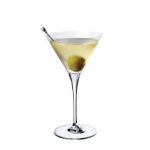 -I'll have a martini, please. 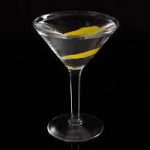 Your task is to spot the anachronism. Well the cocktail (then known as a Martinez, named for a town in California) almost certainly existed at the time of Dickens' last trip to the States; however, the practice of adding an olive came later. This article was inspired by a chat I had with vermouth maker Michael Kaplan in South Queensferry a few months ago.

I'm not a huge cocktail fan (though I believe that at one time a G & T would have been described as such). They tend to be either fruity and can slip down in a gulp, or rocket fuel. Either way they can have unfortunate consequences - more of that later. So how did the Martini cocktail as we know it today evolve? One thing is certain - it wan't directly to do with the Italian company Martini & Rossi, now owned by Bacardi, but it's been a fine stroke of luck for them. They have been producing Martini Rosso since their foundation in 1863 and I'm sure their Martini Extra Dry has featured in a fair few cocktails since it was first manufactured in 1900. They have also owned my vermouth of choice, Noilly Prat, since 1971, the latter having been in production since 1855.

Anyway, that's enough history, and this is a cookery column. The early Martinez recipes were very sweet. The first recorded one dates from 1887. I quote verbatim.

Shake the ingredients thoroughly with 2 small lumps of ice, and strain into a large cocktail glass. If the guest prefers it very sweet add 2 dashes of gum (Gomme) syrup.

Let's move swiftly on. A recipe for a Martini Cocktail published in 1888 had equal quantities of gin and vermouth (still sweet). Orange flavouring was added, and this is the first reference to the twist of lemon.

We tend to think of cocktails as synonymous with the Roaring 20s. There is, of course, a very good reason for that. The USA was under the yolk of Prohibition from 1920 - 1933. There was plenty of bootleg gin about (it's fairly easy to make), mostly of indifferent quality. It was understandable that you would want something to take away the taste. Something sweet, vermouth if you could get it, was a logical choice.

In 1920s London, then home to the world's finest dry gin, the fashion soon developed for a less sweet drink using dry vermouth. A ratio of 2:1 gin to vermouth was common, though orange bitters were still used. In 1930 Harry Craddock, doyen of The American Bar in London's Savoy Hotel, produced The Savoy Cocktail Book, with a variety of martini recipes. He includes the Martinez, made with equal quantities of gin and dry vermouth, mercifully without the gomme syrup. Here are three of his variations.

2 parts dry gin to 1 of dry vermouth, shaken well and strained into a cocktail glass.

For James Bond's vodka martini, Craddock tells us simply to substitute vodka in place of the gin in any recipe which takes your fancy. Yet the first cocktail we read of Bond ordering is in Casino Royale. He later names it the Vesper Martini after the lady (Vesper Lynd) whose virtue he's pursuing.

3 measures of gin; 1 measure of vodka, half a measure of Kina Lillet (a type of vermouth). Shake very well till ice cold then add a large thin slice of lemon peel.

Put the seeds and pulp from one of the passion fruits in a cocktail shaker with ice and all the other ingredients apart from the fizz. Shake well then strain into cocktail glasses. Top up with some fizz of choice. This is traditionally garnished with a slice of passion fruit.

100ml vodka; 50ml freshly made espresso, allowed to cool; 50ml coffee liqueur; 1tbsp sugar syrup (use more or less according to your taste).

Shake all the ingredients with ice, then strain into glasses. Garnish each one with a couple of coffee beans if you fancy.

For my own part, while I find a combination of gin and dry vermouth pleasant enough, I have no love for the modern day Dry Martini. Bartenders seem to have adopted as their role model the so called Churchill Martini. This uses no vermouth at all. Pour gin from a bottle which has been stored in the freezer while glancing at a closed bottle of dry vermouth, or making a sly bow in the direction of France.

The last (and final) time I ordered a Dry Martini in the States I was served 8 fluid ounces of neat gin. That's nearly 10 pub measures! Sensible people would have abandoned it, or looked for a handily sited pot plant. A typical Fifer, on the other hand is thinking, I've paid for it... The consequences were not good. So, not for me.