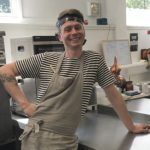 Passionate. I must stop it. It's just too Mills & Boon.

Perhaps, but it's easier said than done when you meet food enthusiasts, the ones who go wild eyed when talking about their produce, the ones who can declaim about it for hours while never, ever being boring. I first encountered Robin at a demonstration evening in LeftField. I was mesmerised by his eloquence. I marvelled at the range of samples he produced out of his freaky fridge (his phrase, not mine). It was only afterwards that it dawned on me that I still wasn't quite sure what koji is.

To remedy this I arrange to meet in his premises in Roslin, which sometime housed the potato research institute, or something like that. It seems an appropriate place for a cutting edge food business, one of very few koji producers in the UK. Yes, I hear the question on your lips and I'm coming to it. Put very simply, koji is the foundation for most Japanese produce, be it soy sauce, miso, mirin or sake. It involves one of the oldest fermentation processes in the world, one used just about everywhere from India eastwards, not just in Japan.

On your behalf, I ask yet another obvious question, to wit, how on earth do you get into this? Qualifications in chemistry and biology obviously helped, but a job working on oil pipelines just wasn't his thing. Nor indeed did he much relish having a boss. The stepping stone was a Masters degree in Gastronomy from Queen Margaret University (Yes, the same one I was turned down for aged 65. Not that I'm bitter and age obviously had nothing to do with their decision.) Robin's experience was rather better. QMU funded a trip to Japan to do a dissertation on the differences between whisky making in Scotland and Japan. Robin visited a sake brewery - run by the 17th generation of the same family - and was fascinated. Heading back home, on the last jumbo jet out of Osaka pre pandemic, the business idea was born. Koji Kitchen came to life with much help from Scottish Enterprise though, sadly, other branches of officialdom are less supportive - more of that anon.

Koji starts with cooked rice exposed to a fungus called aspergillus oryzae. I could give you the whole process, but I suspect you'd be less fascinated than I was. Robin uses the purest version of aspergillus known to man, and imports his rice from the Po valley in Italy, despite soaring prices. In short, quality is king. His unremitting pursuit of excellence has taken him to the Presidency of the Fermenters Guild UK. In one sense he is in the right place at the right time. The world is opening its eyes to fermentation, though we may not all be fully aware of it. Enjoy kimchi or sauerkraut? Bacterial fermentation. Koji and its many offshoots? Fungal fermentation. And, of course, sourdough. Yeast is a sort of sui generis fermentation. That's where Robin lost me on the science side.

On a baking hot day I was given a glass of kefir, fermented milk tasting a bit like sourdough starter, but in a good way. Later in the morning we tried a glass of kvass, his latest creation. That's a very refreshing drink made from fermented bread. I'd last tasted it in Moscow in 1972 when it used to be sold from lorries the size of petrol tankers. Sadly, not all is well in the fermenting world. The same people who nearly did for Errington Cheese are a constant thorn. Anything that's not sterilised or pasteurised invariably incurs the wrath of the sanny men, AKA Environmental Health officers. A loophole in food labelling law means that Big Food plc can describe their factory made stuff as probiotic, but Robin can't. He has been forced to spend a fortune, running into five figures, on numerous food tests, all of which have confirmed that his produce is not only safe, but positively beneficial. It's not outwith the bounds of possibility that he may have to relocate south of the border.

In the meantime, the whole koji idea is growing. Chefs such as Stuart Ralston at Aizle and Phil White at LeftField are doing great things with it. From that base, it's very easy to make your own miso, far superior to the bought stuff. Reread the Tom Eats! columns of the last couple of years (always a good idea) and you'll note just how much influence Japan is having on our top chefs. And if you're a chef looking to enthrall your customers on a quiet Monday or Tuesday, do as Phil White did and hire Robin for a fascinating, eye opening demonstration.

Alternatives to passionate? My thesaurus lists intense, fervent, animated. Well you can have all of these, but you still can't define Robin Sherriff. As we would say in Fife, he's some boy.

For more information, or to arrange a demonstration, contact Robin via email at robin@sherriff.co or see his website www.thekojikitchen.com