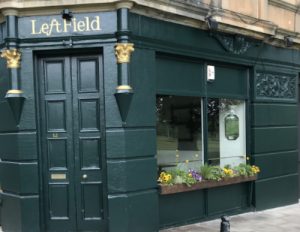 The idea of something coming out of left field is that it takes you by surprise. It's a baseball term. The left fielder will normally throw to second or third base to restrict a runner's progress, but leave him still in the game. Occasionally a player with an exceptional throwing arm may throw directly to first or home bases to get a runner out. It's thrilling when you see it. As a long time L A Dodgers fan I could wax lyrical about the delights of the double or triple play, but as I sense your eyes glazing over I'll move on.

A great and long awaited event was being able to lunch once more with the Retired Captain of Industry, and this place had been on my list for some time. It came highly recommended by Vikki and Craig Wood of The Wee Restaurant fame, so the high quality of the food did not come as a surprise. Rachel, who runs LeftField with her chef partner Phil and their two daughters Lola and Poppy was at school with Vikki. Coincidence, really, she told me, that we both fell in love with chefs. A warning, perhaps to parents of girls at school in Stockbridge. Beware the allure of white jackets, checked trousers and a permanent miasma of garlic.

If it's lunch you're after, that's available only on Fridays, Saturdays and Sundays. Dinner is available four days a week. Looking at the effort which goes into the menu, I suspect much of the rest of the week is spent prepping.

For reasons I won't bore you with, we found ourselves at table at the rather odd time of 3 pm. That's no longer an option. It meant, alas, that we were too early for the intriguing sounding potato and Jerusalem artichoke terrine, with burnt onion puree and pickled radishes. It was still in the oven. Can you call me when that's next on the menu, please?

The vast majority of the offering is fish based. We started with Shetland mussels and crispy squid respectively, the latter with a sriracha mayo. We commented on the very fine quality of the molluscs and the tenderness of the squid, which had been painstakingly scored. Both fine dishes, but, to be frank, neither out of left field. Things changed when the mains arrived.

A chunk of Borders brisket had been lovingly braised for six hours. Instead of it being presented in a fallen apart heap as my braises are, this looked almost tournedos-like on the plate. There were terrific chips and, I think, some Parmesan and truffle oil somewhere. Guinea fowl is quite unforgiving, as it's so easy to overcook. I may have eaten it better somewhere - I just can't remember where. There was but a hint of the advertised rosemary and lemon. The puy lentils had an undertone of curry and there was a generous helping of buttery mash. I was beginning to despair of chefs and mash. How any of them can take pride in taking a noble spud, passing it twice through a drum sieve, then reducing it to a liquid with ridiculous amounts of cream is beyond me. Catering colleges, send your trainees to Phil White's kitchen to learn. I suspect I would get a row if I put as much butter in mine, but it was a side dish to swoon for. (I originally wrote die instead of swoon, but that did seem a tad over dramatic. And, come to think of it, who swoons these days? -  Shut the **** up - Ed)

But there's more. The whole thing was held together by the most sublime gravy imaginable. Again, chefs, who have the advantage over us amateurs of having limitless amounts of good stock, often overdo it by over reducing it. I don't care for that; nor do I like to see food swimming. This gravy was sheer perfection. Perfection is a word which is over used, but when you have a couple of seasoned diners ooh-ing and aah-ing over such a relatively small detail you can definitely say you've come out of left field.

I seldom eat dessert, though I was sorely tempted by both the lemon tart (much praised by earlier reviewers), and the dark chocolate mousse with lemon shortbread. We settled for a couple of decent espressos. Mum Rachel was front of house along with daughter Lola. Despite the COVID compulsory burkas, one could immediately tell that they were related. And chef Phil made time for an elbow bump and a quick chat. As far as I can see, he does literally everything in the kitchen by himself.

It's a lovely little place, overlooking Bruntsfield Links (not to be confused with Bruntsfield Links Golf Club, which is in Barnton), one of the oldest golf links in the world. Look south and you'll see the Marcia Blane School for Girls (AKA James Gillespie's) - that's the place that has killed off the mockingbird*. East lie the Meadows and Arthur's Seat. Look downward to your plate and you'll see wonderful food: look around you and you feel among friends. I can't believe it took me so long to get here. Don't make the same mistake.

* For those who may have missed it, the Head of English at James Gillespie's High School has withdrawn Harper Lee's To Kill a Mockingbird, and John Steinbeck's Of Mice and Men from the curriculum. It has proved controversial. You can read more about it here.