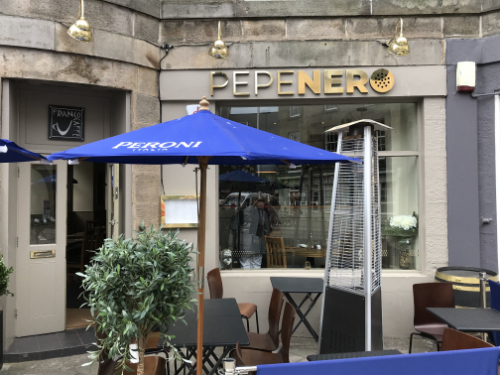 Shall we begin with the negative? On the one page website (we are told that more will follow) and on the voluminous menu, the strapline is Authentic Italian Kitchen. Authentic, I suppose, in that it's following in the tradition of the Edinburgh trattoria of twenty years ago, the uninspired decor, the ridiculously long bill of fare, the heavy use of cream.

But hold on. That's making it sound as though I disliked it. Quite the opposite. For many years I criticised such places, the so called cheap and cheerfuls which so often turned out to be neither. Well Pepe Nero (that's black pepper, no relation to an ancient emperor) turns the clock back in many ways. Look at the generous pricing and you do feel you're in the previous millenium. Steak apart, there is no dish above twenty pounds; avoid the calzone and seafood options and the pizzas are under a tenner; and when did you last order a dessert which cost £1.65?

The throwback continues with the service. The dining room is presided over by the laid back Alessio, sometime of Bar Roma. He has a lady colleague (whose name I have unforgivably forgotten) who is equally charming. I mentioned the cream reliance earlier, something which can cause problems for the Johnston household. No problem, said Alessio, as we were contemplating the fresh pasta section. It's all made to order. Would you like it with tomato sauce instead?

We've been here a couple of times which, in itself, speaks volumes. All of the pasta plates, both fresh and dried, got the thumbs up. You'll find all the old familiar standards. Ironically, spaghetti with polpettine, which is authentic, is one you don't always see. The version here is to be commended, as is the use of norcina sausage in a number of dishes. There is a range of bruschette (sorry, I refuse to write bruschettas), all under a fiver. At least here they are sufficiently authentic not to describe this as Bruschetta on Toast, as I saw recently on the menu of a place which was so awful it will not be reviewed on these pages.

I sense you think I'm being patronising with my reference to the authentic tag. I'll move on to the pizzas. One of our party was impressed with her pizza bianca. No tomato, just an appetising mix of Parmesan, rocket and Parma ham with a drizzle of truffle oil. So far, so Italian. You may have seen Italian fans and their anti English protests at the European football championships. If you didn't you might be expecting the usual crap from sports fans - obscenities, or jibes about Brexit. No such thing. The banners were instead hugely critical of a nation which puts pineapple on pizza, or cream in carbonara. Chef here shares this sense of humour when catering for those of us who live west of Naples. So Pizza scozzese comes with haggis and sliced potatoes, and Pizza americana features smoked sausage and chips. Authentic Italian Kitchen, indeed.

The tables feature individual pepper mills (black pepper, of course). I assumed this would do away with another traditional, not to say authentic, feature of the cheap and cheerful  trattoria, namely the ritual brandishing of an oversized pepper mill. I needn't have worried. It duly appeared along with the grated parmesan. And, as ever, his was very much bigger than mine.

This is exactly the sort of place Stockbridge has been crying out for. It's not a destination in its own right: it's not trendy: it's not up its own behind. What Pepe Nero most definitely is is a place where you can pop in to enjoy freshly made food, delightfully served, with a bill which won't overly dent your wallet. I'll be back.

The good news is that Roberta Hall's The Little Chartroom has reopened in new premises in Bonnington Road, the site of the former Martin Wishart cookery school. The astonishing, and less welcome, news is that it is almost fully booked until February of next year. Suspecting a glitch in the website, I phoned to check and this was confirmed. Bet she wishes she'd opted for somewhere bigger. Good luck - but I don't see Tom Eats! writing it up any time soon.