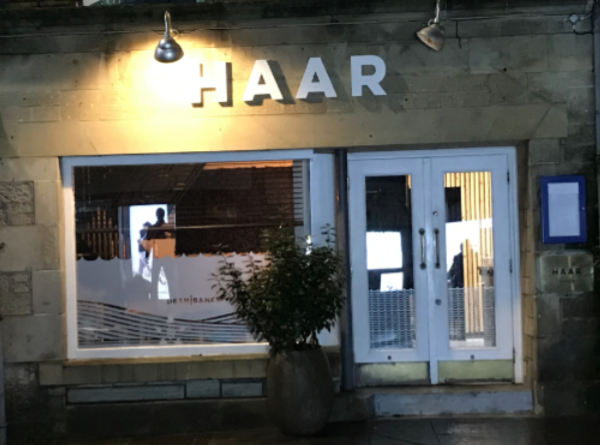 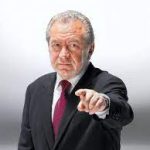 Oh, Dean Banks. I'll begin the year with a quotation from a well known food critic, namely Alan Sugar. This is a shambles! An absolute bleedin' shambles!

We shall, of course, elaborate in due course. Meanwhile, some of you may be saying that we've been here before, to Haar that is. Indeed, we have, but in a different location. There were issues with the landlord, apparently, so we now have a new venue, a new menu and new prices. Three years ago, the five course tasting menu cost £50: today minus extras, £82.50 (plus 10% service charge). That's mentioned not in a spirit of criticism, as the costs for the restaurant trade have spiralled out of control since then. Plus, Mr Banks now has a reputation, and the confidence that comes with having a small empire of successful places. Dean Banks at The Pompadour, and Dulse, both in Edinburgh, have been well received in this column, and Dean has had the signal honour of featuring in Chef Watch. In short, Tom's Food! is a fan.

Subject to a few possible add ons, there is no choice other than the five course tasting menu. Not my favourite format, but it gives the kitchen a bit of time and leeway to show off, usually with a few extra goodies. Sometimes the amuse bouches and pre dessert courses can be the star items. Not today.

We arrive on the dot at 7.30. It becomes clear that diners are to be kept in the tiny reception area, waiting in a holding pattern before being summoned to sit at a little counter where their first course (Snacks, according to the menu) will be prepared before their astonished eyes. 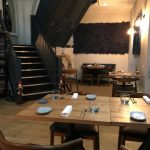 First problem. There are no tables left in reception (I would say bar, but there isn't one). We are therefore taken to our table in the empty dining room. An aperitif? No thanks, we had a drink before we arrived. On reflection, that's maybe just as well. A glass of fizz is always a fine precursor to a smart meal. At our abode, the nearby Old Course Hotel, a five star joint not renowned for its bargain basement prices, we would have paid £14. Here, something equivalent is £18.70*.

Unusually, we had decided to go for the paired wines, and they don't start till the food starts. Thus we wait with our carafe of water for company. And we wait. And wait. Sometime around 8, we change tack and order a bottle of wine, a criminally young Burgundy. A bottle appears of a vintage even younger than that ordered, with nothing to bring that to our attention, and no comment or apology. And we wait some more. Maitre d' Bri (pronounced Brie) glances at us from time time - she may have noticed me drumming on the table and pawing the ground - and moves silently on.

50 minutes in, the other diners from the bar file in. Hurray! perhaps the snack will be delivered soon? Er, not exactly. We have to leave the table and go back through to perch at the counter. For what? Something theatrical, surely? Culinary pyrotechnics, perhaps, or shooting flames? Obviously a display of cheffy skills at the highest level?

Chef James assembles a minute (as in tinsy, not one involving a cheap cut) steak tartare with pickled mushrooms and crunchy bits of brik (filo) pastry, then fills two tiny cones with little cubes of trout and tops them from a foam gun. It's clear that the pastry bits are from the cones that didn't quite work, and the trout cubes are the offcuts from the first course. (Come 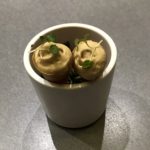 to think of it, maybe the crumbs are on the cone. I'd lost the will to live by then.) Food Skill - 5; Customer Satisfaction - 0. James looks pleased with his work, as would I had if I had the skill to make such delicious morsels. I choose the word morsel carefully. In total we each have three bites of food, the sort of lovely amuse bouche to get the juices going. But that's it, course 1. Now, said James, cheerfully, someone will come and take you to your table. You're all right, son, we know the way, having been ensconced there an hour ago.

In that hour we had of course been shown the menu. Five courses as billed, but not quite that simple. Clearly there was upselling to be done were choices to be made. The facing page had a few other options. Treat Yourself... it proclaimed. Well at £90.75* per skull, I didn't think I was stinting, but read on.

In fairness it's not that unusual for some extra courses to be made available in a tasting menu. Cheese, obviously, or maybe a pre dessert. But scallop, Wagyu beef or smoked lobster? That's strange, but not as strange as the advertised cost of these little extras. Why, market price of course. That being how much? we enquired, hardly an unforeseeable question. Our waitress didn't know. She came back with the figures. Convert to an 8 courser and it works at around £160* a head. But surely, I thought, no one's going to scoff the lot. (Actually we did see a couple of men doing just that, their girth proof positive that their trencherman skills exceeded my own.) So what are the cost implications if we pick and mix? Well she didn't know that either. Turns out that if we swap these three for the advertised trout, cod and venison, our five courses will be £134.75*.

So we stuck to the script and the food was excellent. The trout with a Café de Paris emulsion was the star of the savoury show. Cod - on my palate generally a dull fish - was enlivened with a Cullen skink foam for me and a galangal sauce for the non cream eater. A slice of roe deer came with a round of beetroot missing one or two little scoops - for tomorrow's snacks, perhaps - and an uneventful gravy. I have no idea where the advertised tamarind went. On the side, the thing that looked like a cream tart turned out to be a venison and haggis pie, in a crunchy filo pastry case. Odd but very tasty.

In place of the advertised Nana's Banoffee - I'm sure Dean's version was an improvement on his ancestor's - I joined the cream free brigade for tarte tatin with coconut ice cream. Too sweet, I hear you ask? Don't interrupt. This was a clever twist. The apple had been cooked separately and was nicely sharp. It was placed on a pastry disc, then the ice cream with black and white sesame seeds. A fine ending.

Let's turn to service. In the main, the issues are of management's making. Let's deduct a point for the ludicrous buildup. If you're going to do something like that, you make sure you control the bookings so you have space for all, and a plan B in case of the unforeseen. Another point off for leaving us alone for nearly an hour without a crumb of either substance or apology. Half a point away for not telling the poor girl the prices of the extras, and another half for not giving her the pick and mix info. That leaves two to play for, and it really was nothing other than perfunctory. With the exception of Joe, who brought the plates and announced them with minimum fuss, there were very few smiles on display. Maybe that's what happens to empires. With Dean at the pass three years ago, the previous incarnation scored an effortless 5/5 for service. A shame.

*Prices quoted include the 10% service charge.